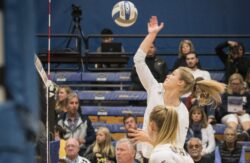 On Friday, the Gauchos opened the weekend set against their conference opponent, Long Beach State.

UCSB handily won the next set due to Long Beach State committing as many errors as kills with 10 apiece. Although the Gauchos also had a low .148 kill percentage, it was enough to win the second set.

In the final set, the Gauchos picked a good time to play to their potential, earning a .333 kill percentage compared to Long Beach State’s .226 kill percentage.

The overall numbers favored the Gauchos as they had a .23 kill percentage in the match, 5 blocks and 6 more aces than Long Beach State.

The standout performers for the Gauchos were sophomore right side Tallulah Froley with a team-high 9 kills, senior middle blocker Rowan Ennis with 4 blocks, sophomore libero Macall Peed with 9 digs and freshman outside hitter Michelle Ohwobete with an impressive 4 serve aces.

Moving to the Saturday game, it was another dominant win by the Gauchos over Cal State Fullerton. The Gauchos wasted no time attacking Fullerton, as they won the first set 25-13, having 20 kills and only 2 errors in the set.  In the following set, the Gauchos once again jumped out in front, winning the set 25-16 with 18 kills and 4 errors. In the final set, the Gauchos had yet another easy path to the sweep, racking up 20 kills while making just 4 mistakes.

By the numbers, the Titans were outclassed in every aspect. The Gauchos had a .466 hitting percentage as compared to the Titans’ .151 hitting percentage, and the Titans had 19 fewer digs than the Gauchos. Some big-time performers from this game included Ohwobete with 13 kills, Ennis with 4 blocks and Peed with 15 digs. In the coming week, the Gauchos will go on to face UC Riverside and UC Davis while looking to stay on their six-game winning streak. These two opponents share a combined record of 1-11 in conference play, so the Gauchos should aim to move to 8-0.

Although these teams look like easy opponents, the Gauchos should try to dominate as they did against Cal State Fullerton, because if they were to make the NCAA tournament, they would be paired against the top teams in the nation.