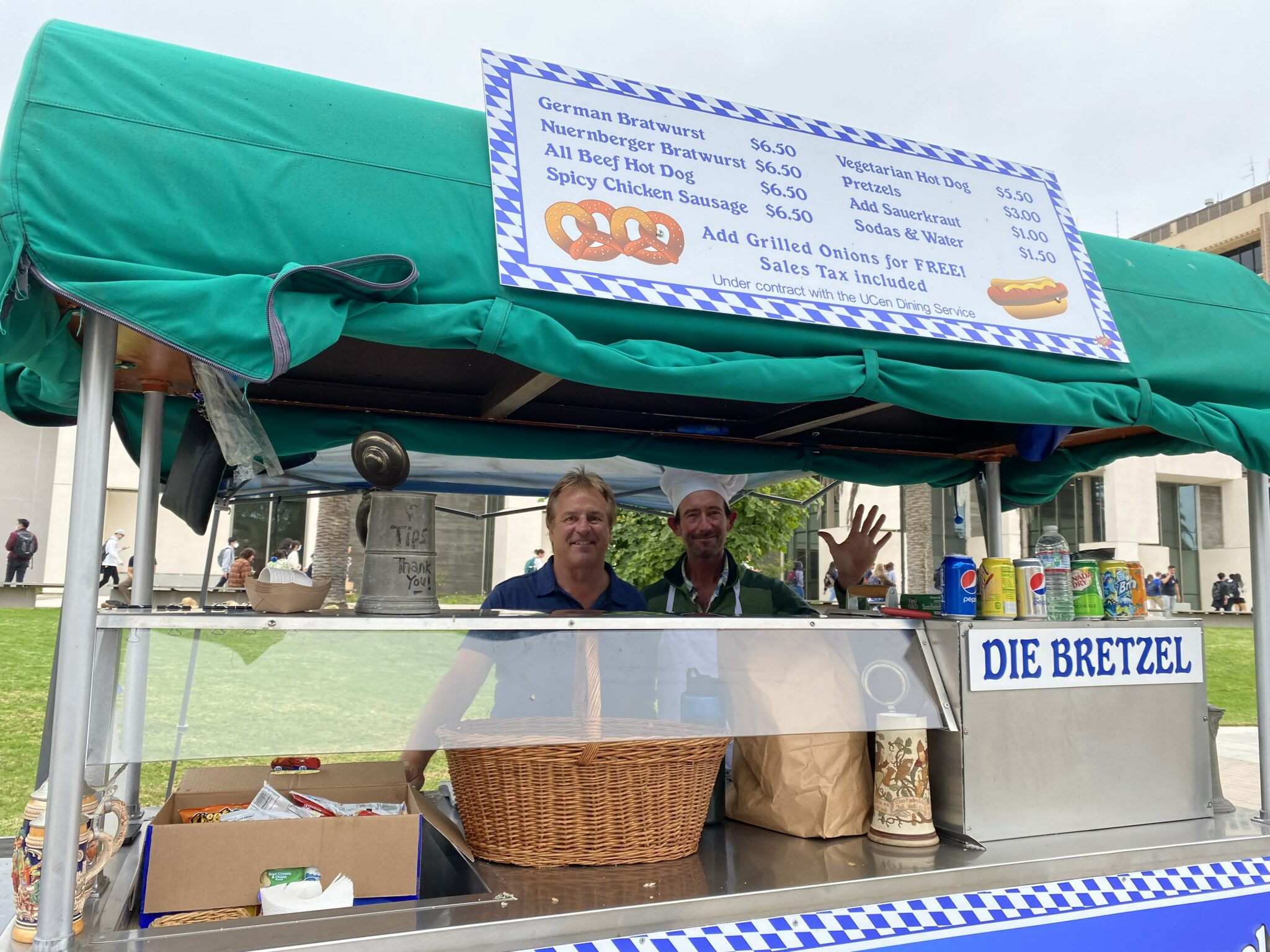 The Authentic German Sausage and Pretzel stand is open Monday through Friday from 10:30 a.m. to 3 p.m. each day on the Arbor. Skylar Moore / Daily Nexus

Gaum moved to the United States from Germany in 1988 at age 30 to work for the German department at UCSB. After meeting his then-wife, complications with the birth of their child resulted in outstanding hospital bills and Gaum began searching for financial relief. It was then that he turned toward opening a hot dog stand to bring in extra money.

The Arbor previously housed a hamburger stand, but due to its inefficiency, the operation was halted, opening a spot up for Gaum. His food was brought to the UCen Dining Committee for samples, and he was offered the cart and space on the strip.

From there, Gaum opened another stand in Santa Barbara’s shopping mall, Paseo Nuevo, and has also bought a clothing boutique downtown with his current girlfriend called Love Bird. The bratwurst stand in Paseo Nuevo has since been sold.

Additionally, Gaum started a small wholesale bakery to locally produce the buns and pretzels. He has made contact with a German butcher in Los Angeles, who makes all the sausages authentic to how they’re produced in Germany.

After the COVID-19 shutdown and campus closures, like many other restaurants, Gaum’s stand was forced to close. However, campus activity since the start of Fall Quarter 2021 has jumpstarted business again.

“I lost about 80% of my sales in the bakery, too,” Gaum said. “Just because most of our customers were hotels, coffee houses, hospitals, so they were shot too. It was a tough year and a half, but right now it’s making up for it.”

According to Gaum, the “back-to-school rush” has made the stand the busiest it’s been in around 25 years.

“I don’t know what’s going on, but we have 10 times more people walking around than before COVID[-19]. Everyone misses the social interaction, so it’s actually really fun to be out here right now and see the liveliness again,” Gaum said.

Gaum said he loves his job because of the array of people he’s able to meet.

“Every year it’s a new start, because there are new students coming on campus and so we have to reintroduce them and lose our loyal customers. And so it’s constantly just kind of making people aware we’re here and what we offer,” Gaum said.

“But my favorite part is seeing the same smiling people over and over. I’ve been here for 30 years, there are lots of people coming to the stand for 30 years and it’s nice, just to somehow stay in touch with this community out here.”

Through his time at the cart, Gaum has been able to meet various Nobel Prize winners, along with theoretical physicist Stephen Hawking.

“He stopped by and I chatted with him for 15 minutes,” Gaum said.

Gaum said his business never started as a childhood aspiration but that he still values it as an example of adapting to whatever life throws at you.

“This was never a dream of mine,” Gaum said. “My idea was to be a professor and running a business was never in the picture. But I think the financial pressure of having a kid and starting a family and then the complication with hospital bills — you have to learn to be flexible. Life throws curveballs at you and it’s up to you how you react. I think flexibility in life is just a great denominator to go through tough times.”

The Authentic German Sausage and Pretzel stand is open Monday through Friday from 10:30 a.m. to 3 p.m. each day on the Arbor.

CORRECTION [10/10/2021, 1:55 p.m.]: A previous version of this article incorrectly called the stand Die Wetzel. This article has been corrected to reflect the stand’s correct name, Die Bretzel. 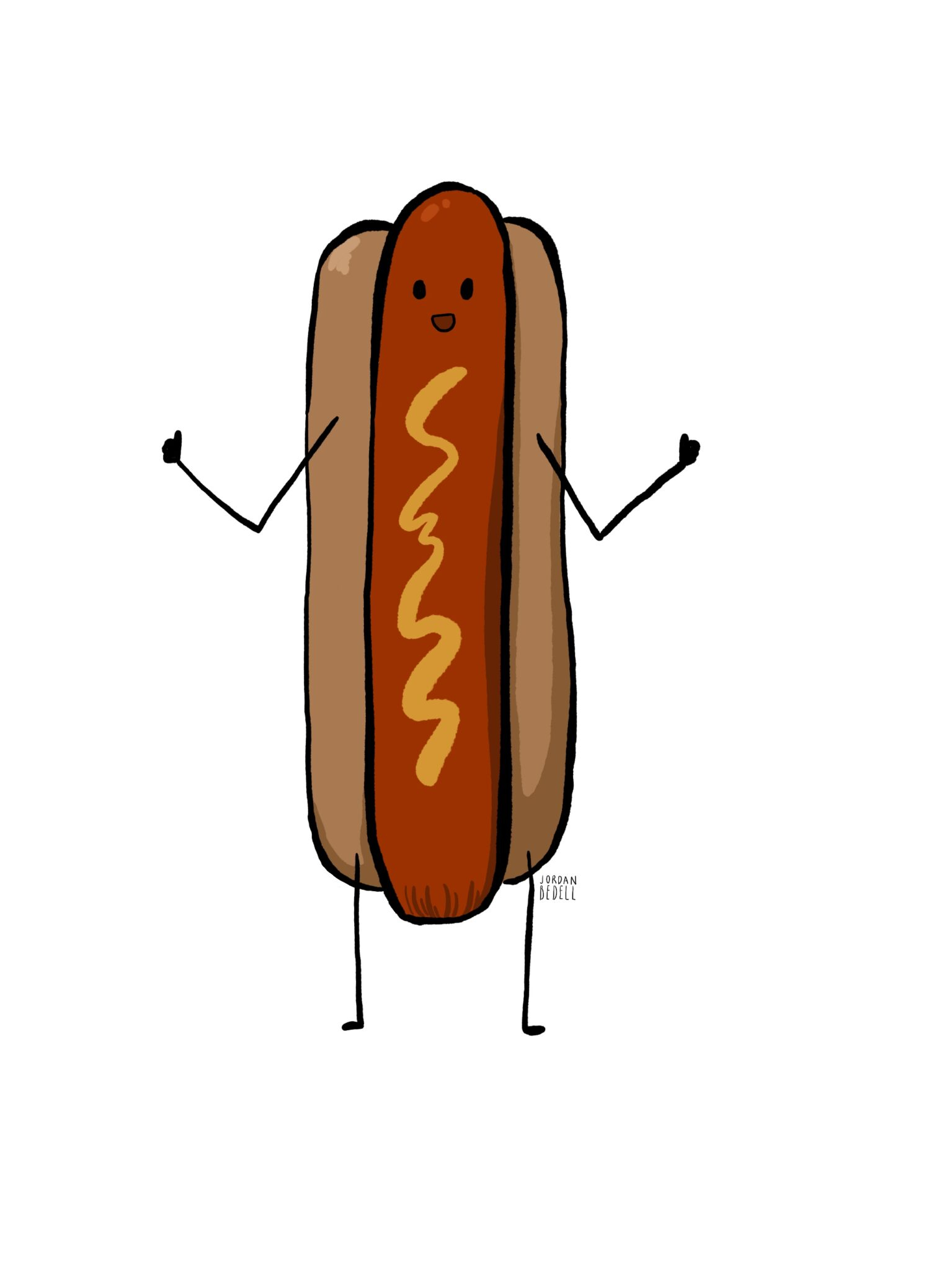