Students, county residents and local politicians all gathered at De La Guerra Plaza at noon prior to the march. World Dance for Humanity danced to various famous anthems of female empowerment, including Aretha Franklin’s “Respect” and Meghan Trainor’s “Woman Up.”

Cordero stood in front of the crowd alongside her family members and other members of the Coastal Band and discussed the importance of inclusivity and addressing intersectionality within advocacy for reproductive rights.

Cordero’s niece Kelly added to the discussion of inclusivity and intersectionality within advocacy for reproductive rights.

“Not all people with uteruses are women,” Kelly said. “Not all pussies are pink either. We’re here in solidarity because they’re trying to take control of us, and it’s not going to happen.”

Limón’s speech discussed the impact of the new Texas law on the residents of the state. Limón shared the story of a pregnant woman whose child has anencephaly — a fatal condition where the child is missing parts of its brain. The mother was unable to get an abortion in Texas and had to fly out of state, NPR reported. 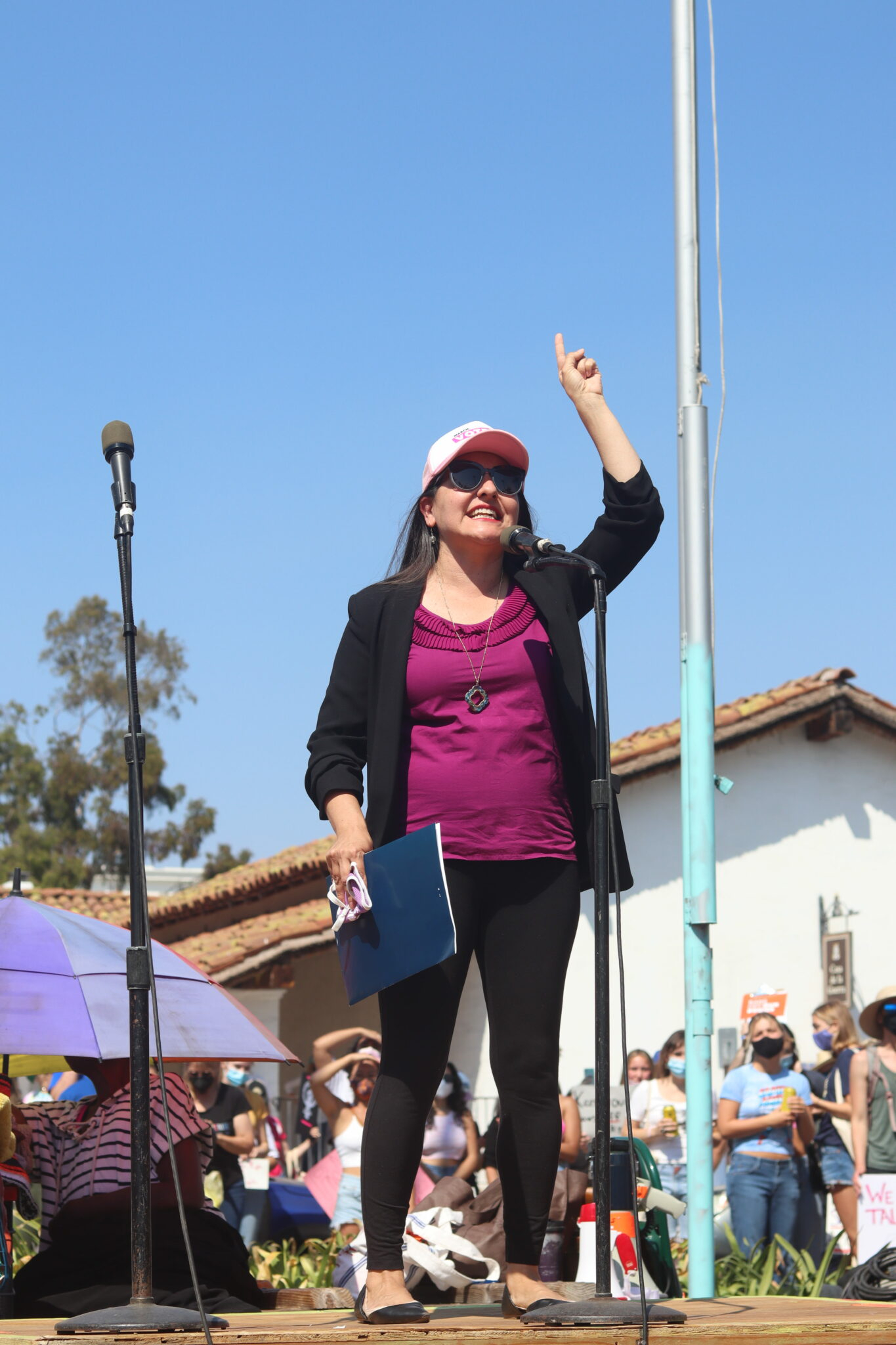 “We know for a fact that [the new Texas law] will not reduce abortions, that this will reduce safe abortions and require women to seek unsafe alternatives,” Limón said. “This is the reality of what is at stake.”

Limón added that in 2021, “over 600 laws restricting abortions have been introduced in this country.”

Tosh followed Limón’s speech, highlighting the various laws and restrictions on abortion throughout the country.

“Roe v. Wade is hanging on by a thread. Abortion is effectively illegal in a U.S. state for the first time since 1973. In December, the Supreme Court will hear a direct attempt to overturn Roe v. Wade,” Tosh said. “If they do overturn it, 26 states will likely ban abortion before the end of next year. These states are home to 36 million women of reproductive age and even more trans men and gender nonconforming and nonbinary people who stand to lose their constitutional right to a safe and legal abortion.”

“Nearly half of U.S. people who can become pregnant could lose their reproductive rights overnight,” Tosh continued.

Next was Jackson, who discussed the Supreme Court’s regard for stare decisis — a legal doctrine requiring courts to abide by the precedent set by previous cases. In this situation, the set precedent would be from Roe v. Wade.

“So what do we do? We have a Supreme Court now that has disrespected the notion of what they call stare decisis — accepting the laws that existed. We knew this was going to happen,” Jackson said. “The senate at the time allowed sexual harassers on the court, they allowed people who have lied and committed perjury in their hearings saying they would honor stare decisis and they have not. We need to take action.”

After all the speeches, the marchers, including UCSB students, took to State Street — chanting and marching to the end of Anapamu Street right by the Santa Barbara County Administration Building.

“I’ve been studying history a lot, especially repressed and totalitarian environments. And I don’t want to live in one, to be honest,” said first-year economics major and march attendee Dexter Laviolette. “I think we should do everything we can to make sure we preserve our freedoms and rights, whether they’re legal or not.”

“We should remember that everything the government does anywhere is with the consent of the governed,” he continued. “As long as we stay conscious and do not give them our consent, they cannot do anything we don’t want them to.”

Carly Lankarani, a first-year history of art and architecture major who attended the march with LaViolette, concurred that students and community members alike should remain aware of current events and advocate for women’s rights.

“I’m just staying aware of current issues. Do your part, if you’re able to, go out and vote; if not, pre-register to vote, just pay attention to politics, do what you can on campus, or even, like, your local community, make sure the word gets out,” she said.

In an interview with the Nexus, Limón congratulated high school- and college-aged marchers for being civically engaged and fighting for their rights.

“Kudos, kudos for caring about your rights now, whether you can vote or not. It’s about caring, and ensuring that your voice — because you’re the next generation of leaders — is represented at the table,” Limón said. “So thank you to all of the women — young and older and everything in between — who have showed up [and] to the allies because it’s about showing that this community is backing reproductive health choices.”

Correction [10/07/21 5:12 pm]: A previous version of this article that appeared in print incorrectly spelled UCSB student Carly Lankarani’s last name as ‘Linkrani’ and did not capitalize the ‘V’ in UCSB student Dexter LaViolette’s last name. The article has since been corrected to reflect the correct name spellings.