The Daily Nexus
Volleyball
Slow, but Promising Start For the Gauchos
September 23, 2021 at 11:27 am by Garret Harcourt

This year’s women’s volleyball team will have some work to do if they are to make the end- of-the-year NCAA tournament. Although they started out 1-6 in the 2021 season, they have won their last two at the UniWyo Invite. 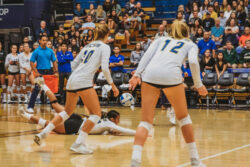 The team is building off of a canceled season and is only two years removed from winning a game in the NCAA tournament where they took on the number two seed Texas to five sets.

Although the 2019 team only lost six games that year, they too, started on a winning streak that lasted into their league games.

The Gauchos’ first game against a ranked team this season came against the No. 21 ranked Pepperdine Waves. This was a close match with the Gauchos taking two of the first three sets before losing the latter two, leading to a loss.

In the UniWyo Invite, the Gauchos started off with another loss, their sixth of the season in a five set match to Wyoming, whom they defeated in five sets in 2019. This loss is misleading, as the match could’ve gone either way, but Wyoming came out on top: 15-13 in the final set of the match.

In the last two games of the UniWyo Invite, the team responded with two resounding wins. The first was over the SEC powerhouse Missouri in straight sets, and the second game was a closely contested four-set win over Northwestern. The Gauchos should be on a good track heading into their next fixtures taking place on home turf at the Thunderdome Classic.

Throughout the young season, there have been loads of standout performers on the Gauchos volleyball roster.

Sophomore Deni Wilson has been tremendous with a team best .416 kill percentage. She is also second on the team with 142.5 points as opposed to just 24 errors.

A freshman standout is the points leader on the team, Michelle Ohwobete, who has accumulated 149.5 points on the young season. On the other hand, Ohwobete has a .234 kill percentage, which would put her in the lower percentile on the team.

One player looking to turn the tables is junior hitter Sophie Messinger who has a troubling .107 kill percentage. If she cuts down on the errors, she would be a force on the court, as she has the fourth most total attempts on the team.

All in all, this Gauchos roster is only two years removed from the NCAA tournament success, so there is reason to believe they can turn around the slow start to the season.