Over the past year, the unrest and uncertainty brought on by the COVID-19 pandemic spurred an array of social movements. From university affairs to national events, the pandemic marked great social unrest, but in-person activism evolved to allow for social distancing in light of the added risks around gathering. 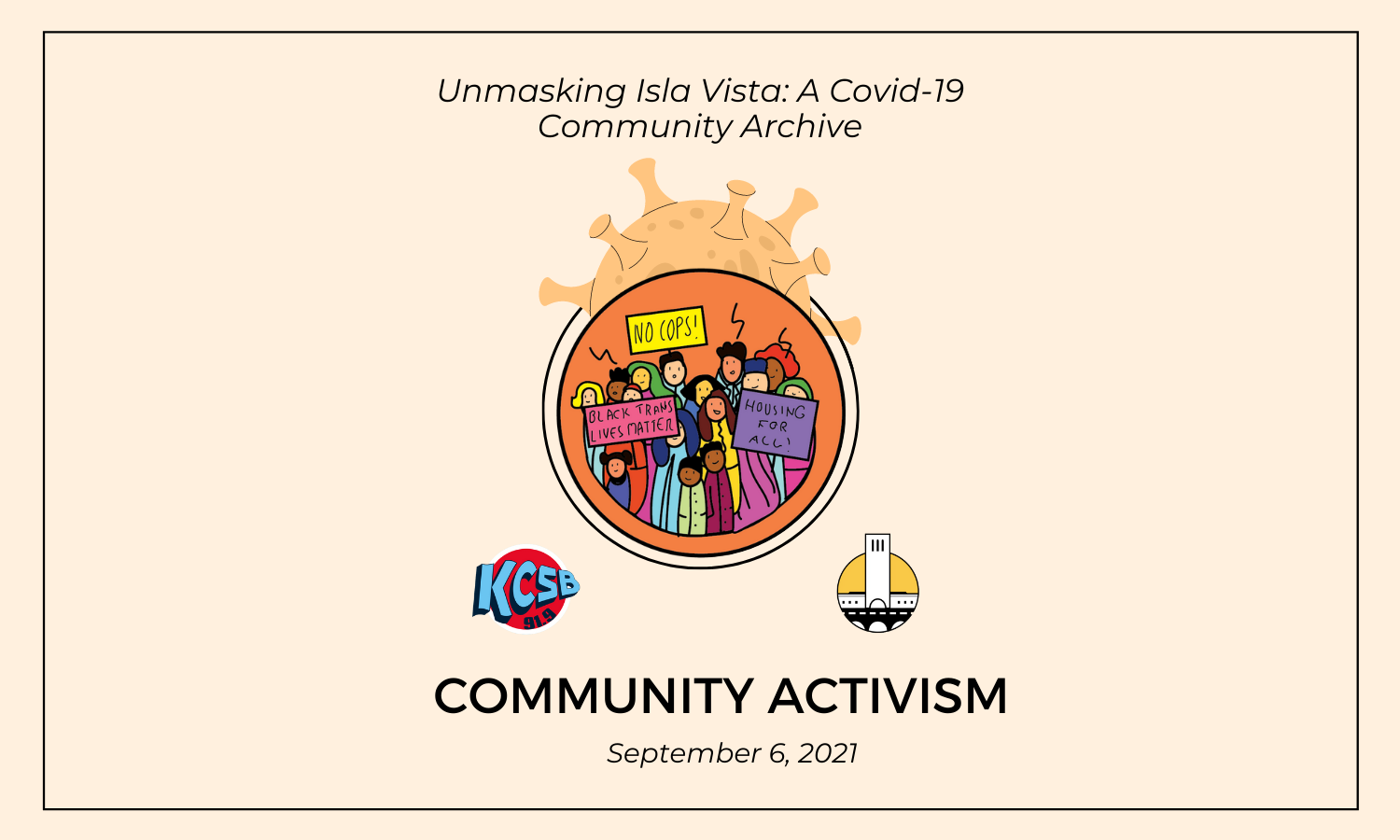 For Dani Lynch, president and one of the four founders of Save San Marcos Foothills — a campaign that successfully prevented planned development on the West Mesa property which has historical ties to the Chumash Nation — the pandemic provided an unforeseen opportunity for organizing.

“In the beginning of our efforts to Save San Marcos Foothills, we were a bit perplexed as to how we were going to get the word out to enough people during a global pandemic,” Lynch said in a statement to the Nexus.

“The unforeseen benefit of COVID-19 is [that] folks started getting outside more and connecting with nature on a deeper level, even if they weren’t aware of it at the time. To many, life became simpler. We started slowing down and opening our eyes to what is working in our lives and what isn’t,” she said.

Lynch attributed public support to the campaign’s success, which reached its $18.6 million goal to purchase the land from the Chadmar Group, stemming from community members’ increased attachment to nature and the land’s history.

“Every Saturday, [Save the San Marcos Foothills] posted up at [the San Marcos Foothills]  to spread awareness of the impending housing development, and every Saturday, I [would] meet someone new that hadn’t been there before, or [hadn’t] really explored any of SB’s outdoors until what I like to call ‘the big hunker down,’” Lynch’s statement continued.

The group is currently making plans for long-term stewardship of the land.

Taylor Clark, co-chair of UCSB’s Young Democratic Socialists of America (YDSA), believes that the pandemic could open a window for long-term change.

“I think that what the pandemic has done first and foremost — hopefully this will change after the pandemic — but I think in the short term, it’s made people a lot more hopeless,” Clark said. “They just see all the issues getting worse. They don’t see an alternative, or an approach to solving those issues.”

“[But] I think it’s laid the groundwork for an immense amount of radicalization and in organizing long term once we get back in person, because a lot of people have seen the conditions caused by the pandemic and how the people who were wealthy before [are] so primarily benefiting from the situation.”

YDSA mainly saw organizing success with a march this past May to demand $900 checks to be distributed to each student for COVID-19 relief from the funding the university received through the Coronavirus Aid, Relief, and Economic Security Act and the Coronavirus Response and Relief Supplemental Appropriations Act. Around 50 students and faculty members marched to Chancellor Henry T. Yang’s campus home to demand that the university send COVID-19 relief funds directly to students.

While the request was ultimately unsuccessful, Clark said he was impressed by the fervor of those who attended and has his sights set high for the upcoming in-person school year. He said that YDSA hopes to not only build ties with other YDSA chapters across the country, but with other intersecting social movements at UCSB.

“I think a great place to start [for the university] would be defunding the campus police, who are largely redundant anyways, and distributing that money to services that are actually much more beneficial to students’ day-to-day lives,” he said.

Maya Sinha, a member of the Cops Off Campus Coalition — an organization that promotes defunding and abolishing the police — felt that the pandemic has allowed people to educate themselves on what police abolition actually entails. 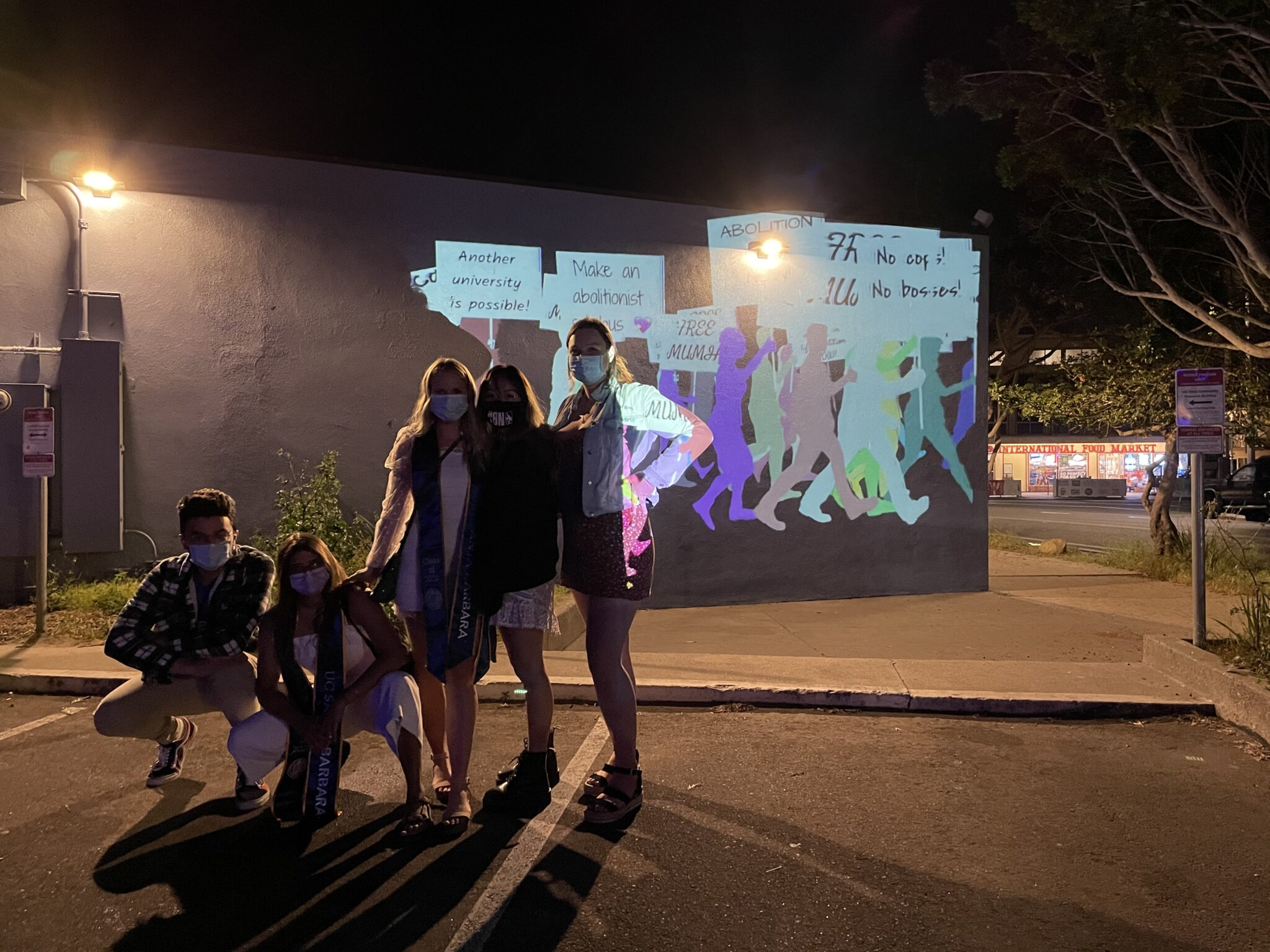 A “virtual walkout” video projection was held outside of I.V. Theater by UCSB FTP. Courtesy of Charmaine Chua

“I think it’s been really cool to see how creative people are engaged online in terms of activism,” she said, noting that increased internet usage during the pandemic had led to more widespread engagement and education.

“We’ve been using all the resources that are available to us to kind of spread the word about what Cops Off Campus is and about what abolition is, because I think first and foremost, a lot of people aren’t totally informed on the full complexity of the issue,” Sinha said.

For Sinha, the pandemic created a personal motivation for her to get involved with Cops Off Campus.

“The community was very stagnant during the pandemic. You’re stuck at home, you’re not able to do as much. And posting infographics online is great, but it still doesn’t feel like something. At least to me, that’s how I felt. And so that’s what started my involvement in Cops Off Campus,” Sinha said.

Along with holding several protests throughout the past year, with one in October 2020 and a month of action in May 2021, Cops Off Campus hosts a weekly “Coffee Not Cops” table in Isla Vista, where members of the group can engage with community members, discuss the group’s mission and answer questions.

Like YDSA, Cops Off Campus aims to grow their membership in the upcoming in-person year.

“Right now, we’re pretty small. We’ve had pretty good turnout at our events, but the organizing committee is still relatively small and tight knit,” Sinha said. “So one thing we’re going to be working on is just spreading the word about what abolition is, so that if people are interested in it, they will be able to make that decision if they want to join or not.”

She also noted the groups’ ties to other UCSB activist organizations, like the Black Student Union and Food Not Bombs, a collective providing free vegan and vegetarian meals.

“This kind of speaks to the complexity of the abolition movement. This isn’t just about police brutality or how we need to find alternatives for the police, but [it’s about] People’s Park, the eviction of the houseless people … It’s not just about people getting arrested, but it’s about people having access to basic resources, like housing and food,” she said.

“I predict that in the upcoming year, it’ll be easier to address those issues in person where we’re able to physically give resources out to people.” 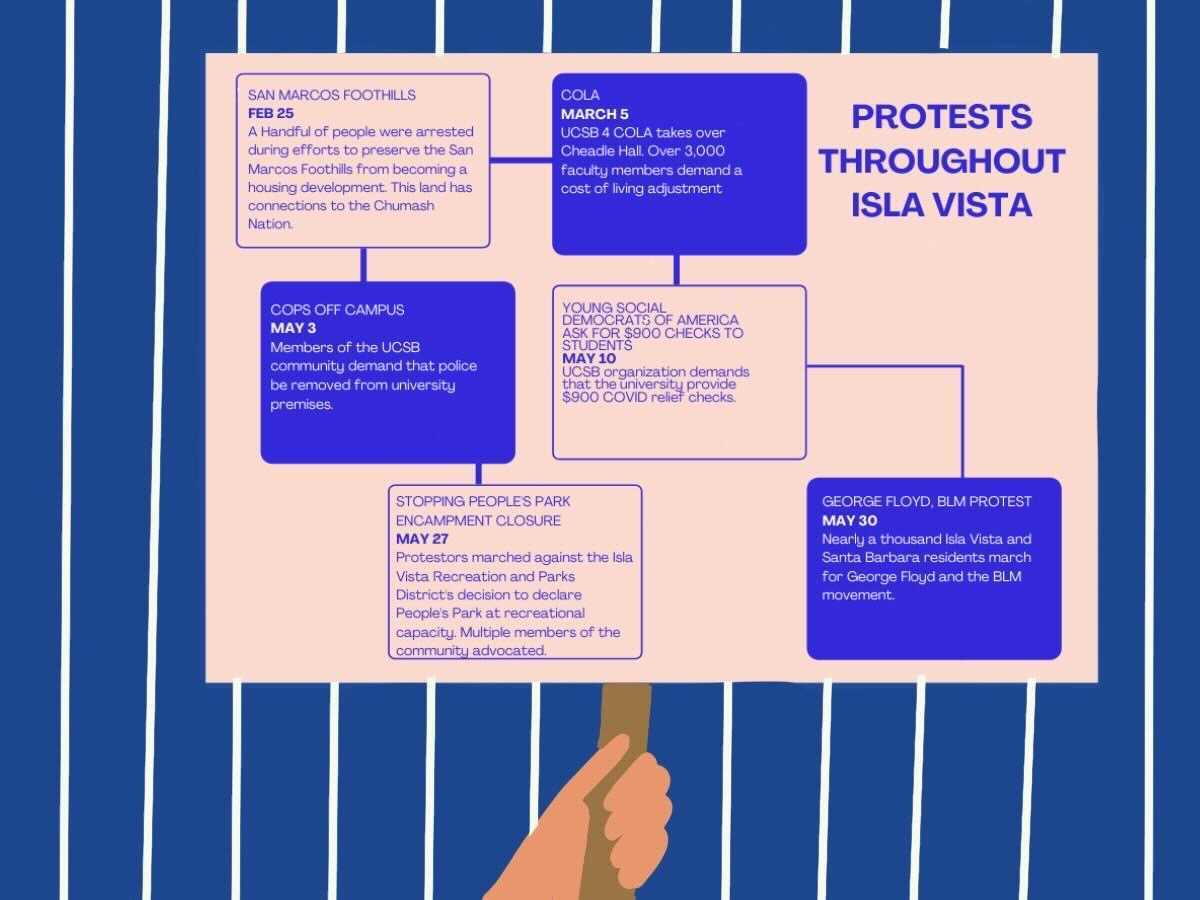 Fourth-year biopsychology majors Pauline Yang and Amy Tran, the co-founders of UCSB’s Asian Coalition, are also optimistic about next year’s organizing work — but they acknowledged that issues like anti-Asian hate have existed before the pandemic and will continue to exist following it.

“COVID wasn’t what caused everything to happen,” Tran said. “It was just kind of like a force to bring everything to light more. And I think that’s something important to acknowledge. [Recently], it was kind of trendy to care about anti-Asian hate, but even before, the issues are the same.”

Tran noted that she has been seeing fewer people “advertising [that] they care” about anti-Asian hate crimes on social media in recent months, and that the internet activism supposedly brought on by the pandemic seems to be dying down.

“I think that might partly be because things are opening up again, and people are like, ‘Oh, things are going back to normal, we can live a normal life again,’” Tran said. “I think that’s definitely something that we need to be aware of. All the topics that we were learning and fighting for during the pandemic, we can’t just sideline that and let it disappear.”

The Asian Coalition — which was formed during Spring Quarter 2021 to support the entirety of UCSB’s Asian community and includes over 18 organizations — has hosted several town halls since its inception, where participants meet with others and talk about collective struggles.

Like Tran, 2020-21 University of California Student Regent and UCSB graduate student Jamaal Muwwakkil feels that the pandemic allowed many individuals to see what minority communities have been consistently experiencing.

“I think that this past year brought to the forefront and brought to the attention of a lot of folks the reality that many of us have been living for quite a while,” Muwwakkil said.  “So in one sense, there’s a focus on police brutality, and then another flashpoint we had to focus on [was] hate crimes, specifically around the Stop Asian Hate movement.”

The Black Lives Matter movement — sparked by the murder of George Floyd — saw protests across the country that drew millions of participants. At UCSB, where 5% of undergraduates and 4% of graduates are Black, a May 2020 protest drew nearly 1,000 participants, and Black community members and organizers publicly reflected on the need for representation and change in the UC system.

“I think that the energy behind those movements, the fact that we were all at home and on edge and paying more attention to the news, and might have … put a lot of wind behind the sails of some movements that were already in place and have been pressing forward for quite a while,” Muwwakkil said.

Muwwakkil hopes the momentum of these social movements will continue past the “uncertain year” they were conceptualized in.

“We had this great group awakening to these practical realities in the world,” he said. “But my fear is that we would go back to normal, or at least aspire to go back to normal, because normal or the way it was before was not great for everyone.”

“I do think that there’s going to be a fading and a loss of momentum. But I hope that during this time, folks have found themselves well rooted in the cause and a bit more familiar with the structures in such a way that the wind blowing will not dislodge them as easily.”

As the 2020-21 Student Regent, Muwwakkil had the unique experience of being in the room for many of the UC’s most important decisions during the past unprecedented year, and both praised and criticized UCSB’s approach toward social movements like Black Lives Matter.

“Institutionally, large bureaucracies are going to be slow to change under the best of circumstances, even if some individuals would like it to do so [quickly]. I think the answer to that is persistence and diversity of voices. Students, graduate students, faculty, administrators, staff, everyone pushing in the same direction to try to get us to where we need to be,” he said.

“I want to laud Chancellor Yang and the administration for doing [some] things as opposed to no things. With that said, I personally take a stance of criticism against race statements or solidarity statements as evidence of intervention. They, I think, are necessary but not sufficient to lead us toward the path of, say, Black liberation specifically,” he continued.

He also expanded on solidarity and intersectionality as key aspects of making progress moving forward.

“We can learn from each other in our collective and individual struggles, that there’s some strategy, there’s some infrastructure, there’s some engagement that can make our results much greater than the sum of our parts.” 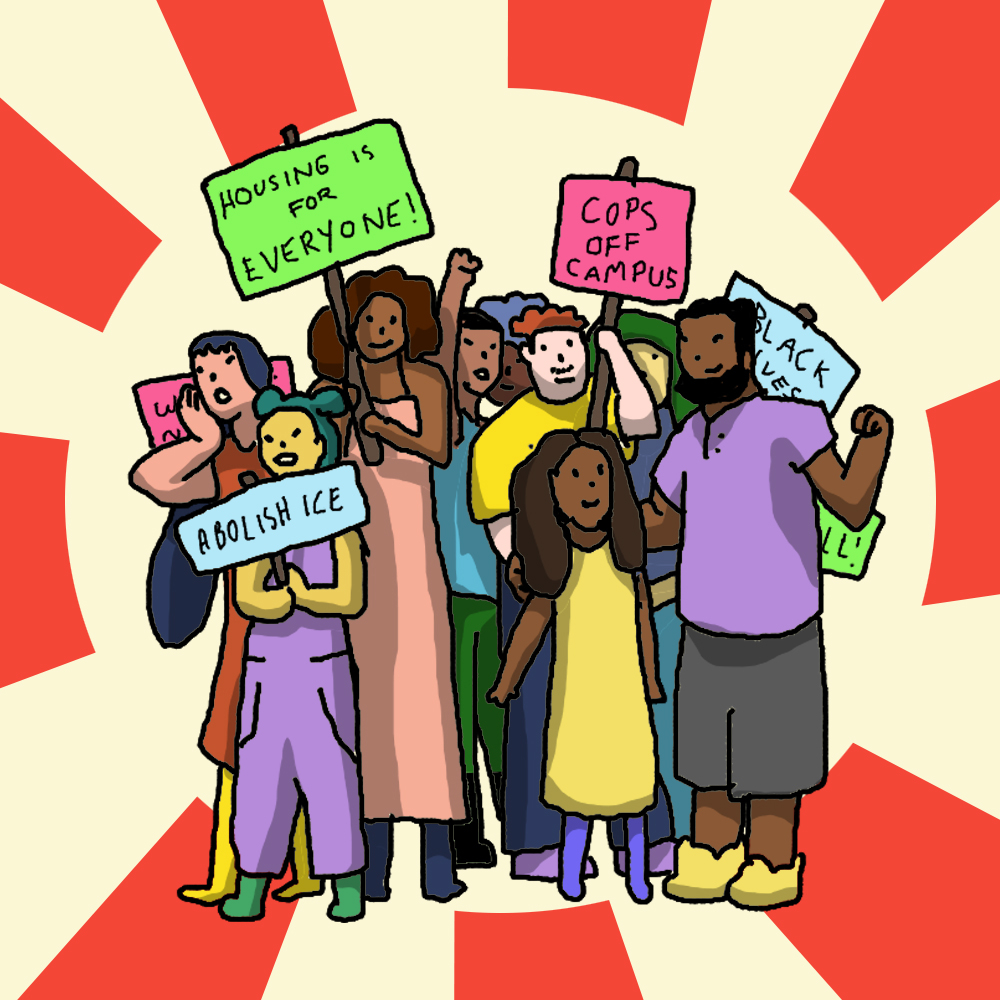