The Daily Nexus
News
Homegrown Cannabis Dispensary ‘The Farmacy’ Lays Down Roots in I.V.
September 7, 2021 at 8:00 pm by Holly Rusch

In his heyday, Santa Barbara County native Graham Farrar was enjoying life in Isla Vista, “spending many, many days in I.V. all through high school and college spring breaks” in the eclectic beach town. 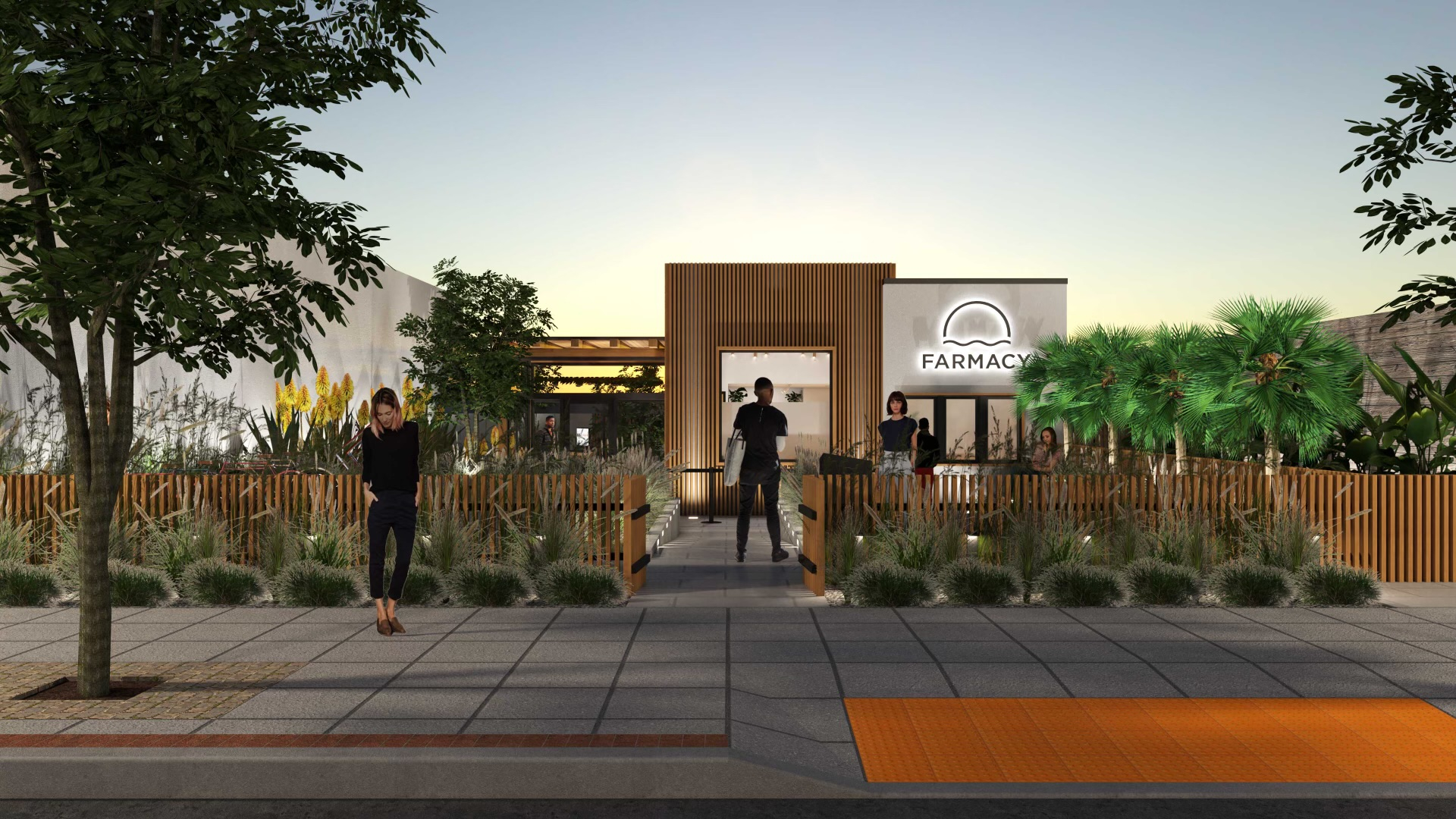 The mock-up of the I.V.’s new dispensary shows what the new cannabis store would look like on 6555 Pardall Road once it opens at the end of 2021 or beginning of 2022. Photo courtesy of Graham Farrar

Now, as the president of Glass House Brands Inc. — which owns and operates a cannabis cultivation operation called Glass House Farms — and the founder of a popular marijuana dispensary, The Farmacy Santa Barbara, Farrar is returning to his old stomping grounds to open I.V.’s first recreational cannabis storefront.

The Farmacy tentatively plans to open its doors either by the end of 2021 or the beginning of 2022 at 6555 Pardall Road.

The Farmacy, which was also the first recreational marijuana dispensary in the city of Santa Barbara to open a storefront back in 2019, was announced the winner of Santa Barbara’s highly competitive merit-based I.V. application at the end of April, beating out five other dispensary applicants. The multi-year selection process involved a review and score of the application by an independent third party and select county employees as well as a review of its neighborhood compatibility.

Due to the COVID-19 pandemic, both the application and preparation to open the storefront suffered months-long delays. Currently, The Farmacy has submitted its initial retail application and is awaiting approval from the county’s Planning and Development division, according to Brittany Heaton, Santa Barbara County’s Principal Cannabis Analyst.

Although The Farmacy was ranked first on the county’s preliminary rankings system for the I.V. area, two protest appeals were filed by Coastal Dispensary and Cookies during the five-day protest period after the rankings were released. After a review of the appeals, however, The Farmacy maintained its rank.

Farrar described the process — including submitting a 150-page security report, graded site inspections of all the applicants and a grade for community impact — as “grueling.” The Farmacy also ranked first in another community district, Santa Ynez.

Farrar felt that The Farmacy had advantages regarding compatibility with the community, including local roots, its permit for local cultivation with Farrar’s company Glass House Farms and its planned storefront location on Pardall Road. Farrar believed those factors set his business apart from other applicants, including the Santa Barbara-based Coastal Dispensary and the San Francisco-based company Cookies.

Santa Barbara’s cannabis ordinance has strict guidelines for potential dispensary storefront locations. A zoning buffer ensures that stores are at least 750 feet away from areas like schools, daycares and youth centers — including the UC Santa Barbara campus, which has childcare centers on both West Campus and at the Student Resource Building. In addition, stores must either own the unit they plan to utilize or have written permission to do so by the property owner.

The Farmacy’s future Pardall storefront will be “fantastic,” according to Farrar. Set back from the road, the stand-alone building doesn’t share walls with neighbors and won’t remove any existing businesses like grocery stores — “I love weed, but not more than food,” Farrar quipped — and meets the ordinance’s requirements.

“It’s kind of perfect, right? It’s like this small spot, not in your face,” Farrar said. “Think about all the people, think about the new parents that come to I.V., right? They don’t necessarily want neon weed [signs] in their face.”

“With perfectly good security, a stand-alone business not kicking out anybody else, coupled with a good operator with demonstrated experience and a good reputation — I think that’s why they picked us,” he continued.

A key component of the county’s merit-based application was its request for applicants to demonstrate their understanding of and support for the community’s basic needs. At The Farmacy, a percentage of all gross receipt sales goes into a community fund, supporting organizations like the Freedom Warming Centers, the Food Bank of Santa Barbara County, Last Prisoner Project and Black Lives Matter, according to Farrar.

“We wanted to make a commitment that no matter what, whether the business was efficient, whether we made money, whether we didn’t, we’re going to give to the community,” he said. “Doing that in I.V. was important to the county but also easy for us because that’s what we want to do anyway.”

Farrar said that making sure the upcoming storefront “fits in with the community” is another priority for the company and highlighted the company’s wide range of products, from low-THC, high-CBD sleep products and CBD bath bombs to THC drinks as an alcohol alternative, along with more typical cannabis products, all encompassing what Farrar called a “holistic cannabis view.”

“Cannabis is medicine, even though it’s fun. Just because it can be fun on a Friday night doesn’t mean it can’t be that and [also] be medicine for people,” Farrar said. “We take kind of a farm-over-pharma approach or a plants-over-pills approach.”

After the passage of Proposition 64 in 2016 — which legalized recreational marijuana by 57% in California and 80% in I.V. — the normalization of legal marijuana sales seems “long overdue,” according to Farrar, who says his Santa Barbara storefront has received overwhelmingly positive reactions.

The storefront, which accepts both state-issued medical marijuana cards and all 21+ customers, has “never had an incident, never had a complaint.” But the other side of the marijuana business — cultivation — is another story.

Farrar’s company Glass House Farms, a local marijuana cultivation center, has received pushback from what Farrar calls a “loud minority” of Santa Barbarans who believe cannabis cultivation is a detriment to the community, though Farrar expects no such complaints to come from I.V.

“Everybody loves The Farmacy downtown. I think everybody’s gonna love The Farmacy I.V. … It is such a perfect fit,” Farrar said. “This is our hometown. We’ve been out in I.V. for 30 years, and now to be able to show up and bring something to it, we’re excited about it.”

A version of this article appeared on p. 3 of the August 26, 2021 print edition of the Daily Nexus.