In Isla Vista, liquor stores and bars outnumber grocery stores, and the abundance of cannabis — in quantity, popularity and odor — is nothing out of the ordinary.

But after 80% of Isla Vistans voted in 2016 to approve Proposition 64, which legalized the use of recreational cannabis in California, nothing happened. As recreational dispensaries sprouted from one town to the next, I.V. stood from the sidelines and watched it unfold.

Now, it’s I.V.’s turn. Come 2021, community members could be within walking distance of a recreational dispensary they can call their own. 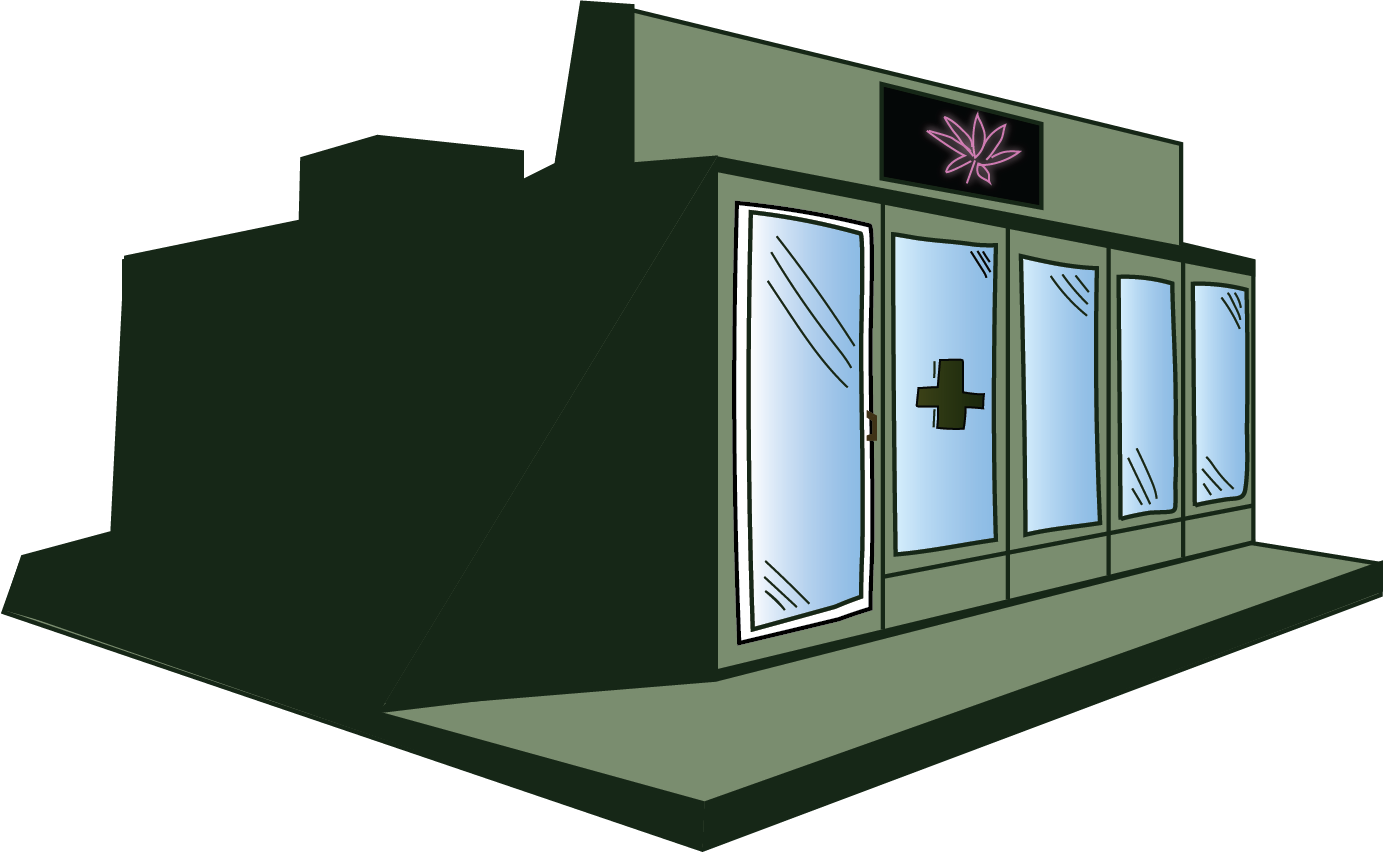 Santa Barbara County’s cannabis ordinance paves the way for prospective retailers to set up a recreational dispensary in the county. Yasmin Ghaemmaghami/Daily Nexus

But those who wish to open up a recreational shop face a number of hoops to jump through, beginning with what is known as a merit-based application. Comprised of business proposals and neighborhood compatibility ratings, the merit-based application is how Santa Barbara County plans to license its most qualified applicants, according to Gina Fischer, a representative from the 3rd District office.

According to Fischer, the board of supervisors had originally planned to open a recreational dispensary application process in July 2o19 under a lottery system. But at an I.V. Community Network meeting in July, residents questioned the lottery system’s effectiveness; raffling away a license, Fischer said, opens the door to “a huge amount” of speculation about a retailer’s intentions.

Facing concern from her constituents, 3rd District Supervisor Joan Hartmann proposed a merit-based application in lieu of the county’s lottery system at the Board of Supervisors’ August meeting, Fischer said. There, the board voted 4 to 1 in favor of the new application.

One advantage of the merit-based application, which has already seen success in the cities of Santa Barbara and Chula Vista, is that it spells out what the lottery system couldn’t: a way in which applicants can demonstrate in their applications that the needs of the community are a priority, Fischer said.

“What do they do for the community? Are they a local business? Do they source locally?” Fischer asked.

Applicants answer those questions in the form of a “community benefits package,” a portion of the application where prospective retailers showcase their community outreach and detail how their business operations would be tailored to the needs of residents, she said.

“The two scores will be combined for a rank-ordering. The highest ranked application in each area will have 90 days to complete its business license application,” she continued.

The county will then award one license to the top applicant in each of the county’s six “community plan areas”: Orcutt, Los Alamos, Santa Ynez, Eastern Goleta Valley, Isla Vista and a combined Summerland and Toro Canyon, according to the ordinance.

Each “community plan area” is appropriately zoned for a recreational cannabis storefront and takes “sensitive receptor areas,” such as schools, day cares and youth centers, into consideration through a 750-foot “zoning buffer.”

“UCSB has a day care on campus. So the 750-foot boundary starts at the end of the light tunnel on Pardall and you would measure 750 feet [from there]. So any commercial zone and any commercial space within that buffer would be ineligible,” Fischer said.

Beyond the zoning buffer, another stipulation is that applicants must either own the unit they plan to turn into a storefront or have “written authorization from the owner to operate a cannabis operation at the site,” the ordinance read.

Because cannabis is still federally outlawed, applicants cannot partner with a business owner who is using a federally-backed bank lender for their commercial property. For the few units in I.V. that fall within the county’s commercial cannabis zone and are owned outright, Fischer said applicants were “promising [those property owners] the moon.”

“I would bet my year’s salary that, within the zone that’s eligible, everybody who owns a commercial property has been approached by one dispensary or another, whether they’re local or far away,” she said.

Part of the neighborhood compatibility scores are contingent on the county’s six neighborhood meetings, which were originally scheduled to take place through April and May.

In light of social distancing restrictions, however, those meetings are postponed. And without them, the licensing process “cannot begin until the community meetings are completed,” said Barney Melekian, Assistant County executive officer.

“We pulled the item from the Board agenda and won’t bring it back until we can provide an updated timeline,” he added.

According to Jonathan Abboud, Isla Vista Community Services District (I.V. CSD) general manager, the I.V. CSD is focused on facilitating “the best possible public participation and figuring out what the community benefit should be from the dispensary” in I.V., such as donating to a local nonprofit. Beyond that, however, the I.V. CSD has been relatively uninvolved with the process, Abboud said.

The window for applicants to apply for a license will last one week and was originally slated to open sometime this July. But the timeline, including the application submission, review and scoring periods, will be delayed as a result of the coronavirus pandemic, Fischer said.

But far ahead of the scheduled deadlines, some recreational cannabis shops have their eye on the gold mine of Isla Vista, where the most successful applicant would have direct access to one of California’s most densely populated areas.

According to Devon Wardlow, director of Public Affairs, and Myles Peck, director of Business Development, Coastal Dispensary is looking to its success as the City of Santa Barbara’s highest-scoring applicant as a model for its application to the county.

“We are 100% invested in Isla Vista. Given that the CEO and the majority of our executive team all went to UCSB, this is a huge opportunity. And on a personal level, it really matters to us,” Wardlow said.

Cookies, a San Francisco-based dispensary that also expressed interest in having a storefront in I.V., did not respond to multiple requests for comment.

In compliance with the ordinance, Coastal Dispensary has locked in an I.V. property that falls within the county’s commercial cannabis zone – located next to Buddha Bowls. Peck estimates that the roughly 4,000 square-foot storefront will staff about 20 employees and will run from 10 a.m. to 10 p.m. Monday through Saturday and 10 a.m. to 8 p.m. on Sunday.

In terms of aesthetics, Peck said that the I.V. storefront’s design would follow that of its predecessors and will feature an atmosphere that is “bright,” “open” and “clean.”

But the design is more than just aesthetics, Wardlow said. It also breaks down the idea that “‘Hey, this is a pot shop,’ to ‘this is a legitimate big-time business that is contributing to the economy in California across the board and to the local economy,’” she added.

Down the line, Wardlow added that she plans to partner with another five to seven community members from “different facets of Isla Vista” to gain additional input for the benefits package.

So far, Coastal Dispensary has held two different informational sessions in I.V., most recently in  February. There, the dispensary fielded questions and concerns from residents about the prospect of a recreational cannabis storefront in town.

Community benefits aside, Peck also said that the dispensary is working on a way in which it can tailor its products to the demographics of I.V.

“We will cater our menu,” he said. “So for a student who is looking for a $2 or $1 joint, we’re going to carry more of that. A lot of stuff that will cater to what the college kids need will be in terms of budget and pricing.”

Regardless of price point, Wardlow maintained that every Coastal Dispensary product is sourced from regional growers within the state. But the allure of budget-friendly cannabis and lab-tested products may not be enough to entice students — who commonly purchase cannabis through unregulated means — to visit the store, Peck said.

“We’re going to be fighting that for a while,” he remarked. “Once you get experience with going in and buying stuff at a real shop — it’s convenient and it’s fast and it’s quick and it’s safe — you’re going to like it. That does start to drive home with the customer.”

Additionally, Wardlow said Coastal Dispensary would carry over its cross marketing campaigns with neighborhood businesses, loyalty programs and discounts to the new store, all of which would be “more robust in I.V.”

If their application is chosen, Wardlow said that Coastal Cares, the company’s employee community service program, would be “tailored specifically” to issues that are pertinent to the I.V. community, such as basic needs.

In a contract with the City of Santa Barbara, the dispensary agreed to donate 2% of its profits back to the community; though a work-in-progress, Wardlow said she hopes to include something similar in her community benefits proposal to the county.

“You haven’t seen something like this where a brand new industry has the potential for massive economic changes for the state,” Wardlow said. “And I think that’s really exciting to be an operator in this situation because how we work is going to determine how successful this is.”

“We want to keep Santa Barbara as the gold standard of retail cannabis.”

Max Abrams
Max Abrams served as the lead news editor for the 2020-2021 school year. He is from Buffalo. That's all you need to know.
4 Comments
Inline Feedbacks
View all comments

Since the leftist politicians will be giving me free college, I’ll have much more $ to spend on bud.

So we’re just going to completely ignore all the families with children living in IV??? Address the damn food desert.