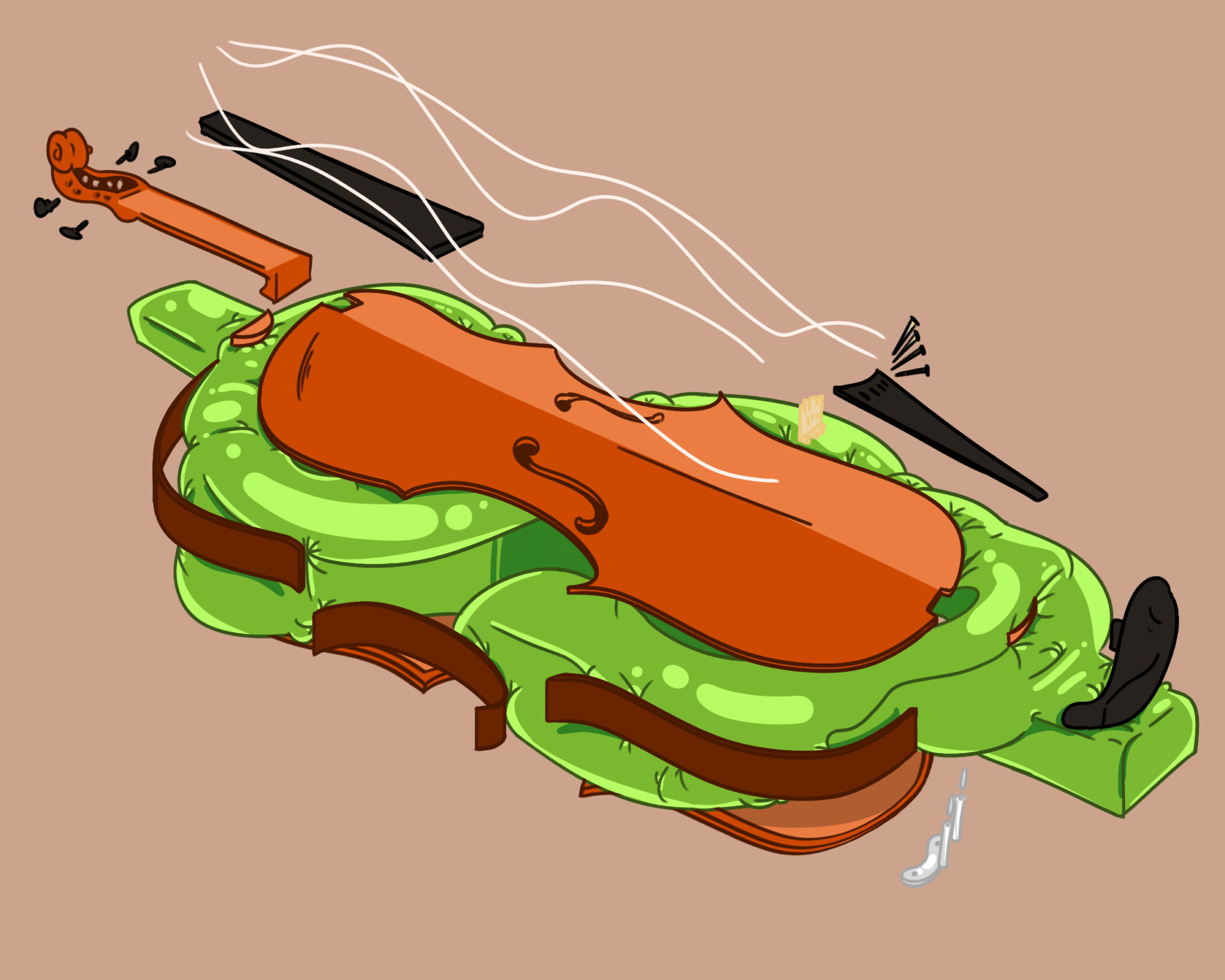 Every Sunday, as far back as I can remember, was marked by the often rushed and flurried expedition to orchestra rehearsal. The desperate sprint through Cal State Northridge’s music department ended at the big double doors of the rehearsal hall. Through them lay a wonderland.

It was always noisy. Kids chatting, strings tuning and someone inevitably showing off on the piano in the corner. Each week I’d find my seat with the rest of the violins, — a hard plastic chair in front of a stand that was always overflowing with loose-leaf pages I had once again forgotten to tape or hole punch. If you looked up, you could see a rogue conducting baton impaled in the ceiling. Orchestra legend has it that at some distant yet historic “worst rehearsal of all time,” the conductor, utterly frustrated with their players, had flung their baton so aggressively at the ceiling that it had never come back down. The ceiling panel to its right read “Bach was here” in blue Sharpie.

Orchestra was a dizzying array of students from different schools with different interests, strengths and lives all shoved together because music was somehow a significant part of each one of them. With homework and study guides shoved under our chairs — only to be whipped out at break time — there existed constant reminders of the ever-present yet blurry separation between us as students and musicians.

Yet, orchestra was a weekend activity, always an extracurricular to regular school because it didn’t ever exist at the schools I attended. In fact, the lack of arts education in schools isn’t a new phenomenon. While my drive to rehearsal was a mere 15 minutes, Abby Karras’ mom spent her weekend schlepping her kids a full six hours to the nearest orchestra because their local school district didn’t offer classroom instruction.

While a majority of Americans agree that the arts are a vital part of a well-rounded education at all grade levels, state funding does not always reflect this prioritization. Indeed, arts departments are often first on the educational chopping block, especially in public schools, and this lack of funding often results in drastic cuts to already-insufficient programs. In the early 2010s, drastic cuts to the Los Angeles Unified School District’s overall budget resulted in an enormous 76% drop in funding for arts education — a cut that equated to around $60 million in funding. This trend in budget inefficiencies continues as shrinking budgets and pressures to raise test scores overshadow the need for arts education.

However, an arts education can in fact be a gamechanger for the academic lives of students. According to a study done by Brookings and the Houston Education Research Consortium, increases in arts educational experiences resulted in improved test scores, increased school engagement and intensified college aspirations. It seems that the answer to the push for higher test scores and more engaged students could have been arts education all along.

Idell Lowe, Mrs. Lowe to me, taught me how to play the violin. In her studio, with its shaggy blue carpet and glass jar of chocolates on the table, I learned invaluable lessons. I learned to practice my scales every day, to set a solid foundation on which to grow. I learned that lying is a waste of energy, especially if the passage that you insist you practiced all week still sounds untouched. I learned how to shoulder constructive criticism, how to balance honesty with gentleness and that even things that seem small deserve to be perfected. But most importantly, I learned to get lost in the music, to honor my feelings and let them speak through notes when words were too hard.

Not only do the arts encourage basic academic skills in students, but they have the potential to develop their emotional and social maturity as well.

It follows then that arts education can also have a tremendous impact on the social and emotional lives of students. In fact, the Brookings’ study notes reductions in disciplinary infractions, growth in the ability of students to empathize with others and reports of students feeling in touch with their own emotions as additional results of an increase in arts instruction. Not only do the arts encourage basic academic skills in students, but they have the potential to develop their emotional and social maturity as well.

Similarly, Mrs. Lowe was a constant in my life in ways I’m forever grateful for. Surrounded by crinkles that hinted at smiles past, her sharp blue eyes missed nothing. From disregarded shifts and lazy posture to misdirected frustration over school or home life that I had mistakenly brought with me into her studio, she caught it all. She would always remember to check in on how my latest math test or history project that I had mentioned to her the week previously had gone. She was the first to know when I made the swim team in high school and I was the first to know when she started going to water aerobics classes shortly thereafter.

When my parents found they could no longer afford to pay Mrs. Lowe for lessons, she refused to let me quit. After being her student for nearly 10 years, for one reason or the other, she knew I needed to stay. She wouldn’t take any more of our money, she wouldn’t take no for an answer, but she would see me next week at the same time. And this time I had better practice!

As usual, Mrs. Lowe was right. I needed music in my life almost as much as I needed her in my life. To take one or either of those away would have crushed me. But because of her selflessness, I got to keep both.

I know, however, that not everyone has a Mrs. Lowe on their team. Rather, extreme disparities persist in who truly has access to arts instruction. The 2008 Survey of Public Participation in the Arts reveals “socioeconomic status is the strongest determinant of obtaining an arts education,” leaving low-income students less likely to receive an adequate arts education. While in the 1999-2000 school year, 100% of high-poverty secondary schools offered music, this number dropped to 81% in 2008-2009. This trend is worrying on its own, but it also involves issues of quality, as the survey revealed that only 59% of schools with music programs had access to a dedicated room with special equipment in 2008-2009.

While the place of arts education in K-12 education remains tenuous, especially amidst new COVID-19 budget cuts, it is important as ever to remember the arts not just as an extracurricular but as one that is necessary for the overall success and growth of students.

Emily Kocis thinks everyone deserves their own personal Mrs. Lowe, but that making arts education accessible to K-12 students is an acceptable alternative.

Thank you, Emily, for this powerfully written homage to your violin teacher, Mrs. Lowe, and to the importance of your own education in music to your personal development, especially during a time of economic difficulty in your family’s life. I can testify to how important it was to me to study the piano under the instruction of very patient nuns in my inner-city Catholic school at a time when my family and I were likewise facing economic hardships. I totally agree with you that the arts are “necessary for the overall success and growth of students. And I love your… Read more »