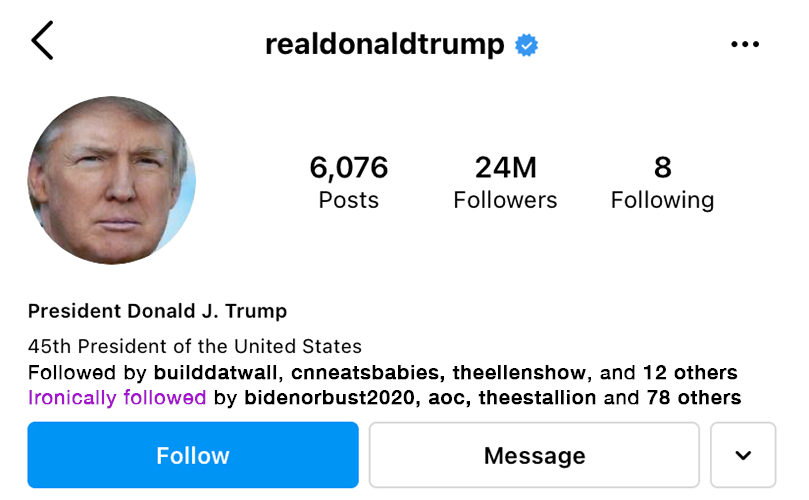 Those tired by constantly having to search up their favorite hated Instagram accounts to see if they’ve posted any more ridiculous content can worry no more: Instagram will finally let you follow these users, judgement free. The handy “followed ironically by” list on their profile lets friends know you don’t actually support this person but just want to see their stupid posts more easily.

Many have found the “ironic follow” feature incredibly useful, especially to see the content of embarrassing childhood obsessions, users spreading conspiracy theories people think might be onto something and artists that your friends trash, but you secretly enjoy (This one’s for you, Meghan Trainor fans!).

Along with the “ironic follow” feature, Instagram also added an “ironic bookmark” feature so users can come back to dumb posts they want to make fun of. “Whenever I bookmark an insane keto recipe, like a hunk of cream cheese as a snack, Instagram’s algorithm thinks that I wanna make it!” nutrition major Shane Ray said. “Now I can clown on these wackadoos in peace and not have my explore page show me a million combinations of avocado, sour cream and peanut butter.”

This “ironic” update has not been without its hurt feelings, however. Emotions have run high in those users who have found out that others have ironically saved their content. “All I did was post a picture of me and my boyfriend on our one month-iversary, declaring our status as soulmates,” Stephanie Bethany said. “Someone ironically bookmarked my post, and it’s, like, made me realize how sad and bitter all of these haters are!”

The “ironic follow” feature is also incredibly useful for keeping tabs on people who you may clash with professionally. On a leaked call, American disgrace and rookie U.S. Supreme Court Justice Amy Coney Barrett was heard referencing the “ironic follow” feature when she said that “I use it to follow Obama because he’s so goddamned sexy.” The justice continued by saying, “If my friends or coworkers found out I have a thing for the guy after trying to destroy his legislative legacy, I’d be in some pretty hot water!”

Barrett and many other users can rest easy at night knowing they can still see their content discreetly without any of the judgements one might face when popping up under that “followed by” button.