The Daily Nexus
Society & Psychology
Thinking Ahead: How Do UCSB Students Feel About Climate Change?
June 20, 2021 at 11:00 pm by Sean Crommelin

In California, climate change is at the forefront of innumerable public conversations and policy discourse — and with good reason. 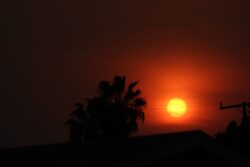 A Santa Barbara sunset set alight in a foreboding glow by the Thomas Fire, at one point the largest single fire in California since records began. Stephen Manga / Daily Nexus

People living in the West have been increasingly battered by the effects of extreme weather intensified by a warming climate. Warming days and nights dry out the landscape and prime it for widespread and sometimes catastrophic fires.  Meanwhile, drier dry seasons are interspersed with torrential rains when they do come, leading to weather whiplash.

The impacts are costly, dangerous and increasingly visible. The same Lake Oroville which was threatened with spillway failure in February 2017 following record rain now has such low water levels in 2021 that the hydropower plant beneath it is being threatened with shutdown later this season for the first time in history.

So, what do we think of this?

Julia Fine, a graduate student in the linguistics department at UCSB, is working alongside an array of collaborators to better understand how UCSB students relate to the climate crisis “both in terms of their attitudes towards it, their experiences and their interest in different types of action,” Fine said.

In order to do this, Fine and her collaborators interviewed a number of local students in fall 2020, with their results and discussion later published in May of this year.

In addition to inquiring students about their personal experiences with and sentiments on climate change, Fine and her collaborators wanted to learn about students’ mindsets toward climate change and initiatives that are aiming to mitigate the effects of climate change and eventually stop it in its tracks. Do students believe that climate change is an immediate issue? What kinds of climate action would students be interested in? What barriers are keeping students from taking action? How can organizations adjust and better incorporate those who want to help, but don’t quite know how? All of these were questions Fine wanted the answers to.

“Respondents overwhelmingly acknowledged climate change as a real and very serious problem, with the seriousness of the issue rated nine out of 10. We got very few climate deniers as well.”

In addition, many respondents reported being personally affected by climate change in some way or another, either due to impacts from wildfire and the necessity of evacuation, air quality issues or even temperature extremes themselves.

Paired with this were the mental health impacts of the issue, with respondents mentioning anxiety, worry, stress, fear and guilt — as well as sadness and frustration.

“I would say that the overall level of concern and alarm is higher than I would have thought. And also, that far more people than I would have expected were directly impacted,” Fine said, adding that “that could be because of the fires in fall 2020, which seemed to be a really prominent theme in this survey.”

However, coexisting with the urgency and concern was confusion regarding how to contribute and be a part of the solution. Many respondents felt that they lacked awareness of opportunities, didn’t have free time to offer, had a lack of interest in the opportunities they were aware of and also didn’t feel that they could be effective as part of a solution.

Some specifically also stressed disinterest in efforts like marches and protests, instead preferring educational events and actions with direct and visible impacts.

Fine also found a socioeconomic relationship between lower-income students and an inability to take action.

“Something both obvious and really important, I think, is that we found that students with lower income tended to say that they were prevented from participating in climate action because of not having enough free time,” Fine said.

“That really has — I think — a pretty profound implication, which is that compensating students for climate action would make it more accessible to people.”

With this information in hand — and forwarded to advocacy groups on campus — Fine sees several courses of action as tenable, including establishing new courses at the university and seeking new sources of funding and financial resources for climate action.