The Daily Nexus
Sign of the Times
Focusing on Faith: Reflections on the Jewish American Experience
May 27, 2021 at 9:00 am by Opinion Editor 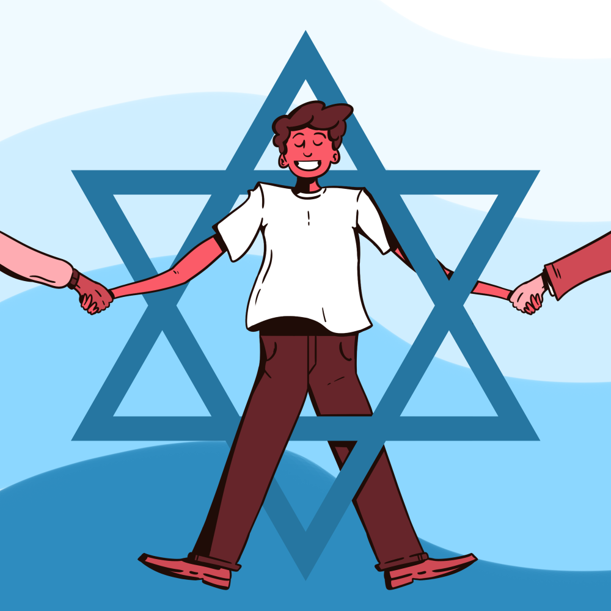 Dedicated in 2006 by President George W. Bush and organized annually by the National Museum of American Jewish History, the month of May serves as Jewish American Heritage Month (JAHM). Intended to recognize and celebrate the achievements and contributions of Jewish Americans in the United States, JAHM serves as an important time to highlight both the past and present Jewish experience.

Additionally, recent escalations between Israel and Palestine have forced many Jewish Americans to wrestle with their religious identity and the extent of its proximity to acts of abhorrent violence. Jews across America, who often lack a substantial connection to their claimed biblical home, are increasingly having to grapple with the reliance of this safe homeland on the subjugation of another. As a result, many Jewish Americans are newly navigating a space in which they can both be proudly Jewish but also increasingly critical of Israel.

However, it is also important to acknowledge that this dangerous assumed connection and implied loyalty between Jewish Americans and Israel has also led to a rise in anti-Semitic attacks in recent weeks. Jewish Americans, many of whom are desperate to draw a clear separation between the actions of Israel and their own Jewish identity, have become targets of various assaults from yelled verbal slurs to explicit acts of violence.

Clearly, it remains as important as ever to empower Jewish communities, educate others about Jewish culture and engage in important conversations about Jewish realities and futures. The following vignettes were written by Jewish members of our Opinion Staff and reflect their individual experiences with their own Jewish American identities.

This year, I sat shiva on Zoom. I logged onto the minyan rather than opening my doors to platters of food accompanied by grieving friends and family. Instead, I saw them through boxes on a screen. My well-intentioned housemates bought me flowers, a gesture I appreciated but ultimately made me long for the dried fruit and chocolates of a shiva basket. I recited the Kaddish to myself and listened to the service through my AirPods. I lit my yahrzeit candle on the windowsill of my Isla Vista apartment and cried on my housemate’s leopard print couch.

Confined to sitting shiva in my apartment, I felt distinctly Jewish in what seemed to suddenly be a largely non-Jewish space. It felt strange and painful to not be surrounded by my family but, also to a larger extent, overall I lacked a Jewish community. Knowingly moving into an environment where I was the only Jewish person, it was more important than ever to me to outwardly display my Jewishness. From small things like baking challah on Fridays to teaching my housemates how to fry latkes during Chanukah, I made a conscious effort to be Jewish in ways I never really had to before. But sitting in mourning alone and physically detached from the rest of my family, I suddenly felt distinctly too Jewish for my surroundings while at the same time entirely not Jewish enough. There I was, in the middle of mourning traditions that none of my housemates had ever heard of, but that even I myself felt like I wasn’t doing a good enough job at.

Too Jewish or not Jewish enough. That is my Jewish American experience. As I carve out my small corner of the world, it’s important to remember that the experiences I have and the safe spaces that I make my own are enough. They are Jewish enough because they are mine.

Introduction and Vignette by Emily Kocis

According to an Orthodox Jew I talked to one time, I don’t count as Jewish because my father is Jewish but my mother is not. It’s whatever. I don’t identify as Jewish. Judaism has never been central to my life. My family celebrates Hanukkah and Passover when we remember, and we disregard the other holidays. We never go to synagogue. I did have a bar mitzvah, but it was at my house with 20 people. Most of my Jewish family is like this, too. My Jewish father is an atheist, a self-described “Jewthiest.” We’re the kind of family who believes it’s very easy to be TOO Jewish.

The Holocaust is where I most strongly identify with the Jewish community. My great-grandparents all fled Germany to Brazil before the war. They were the rare survivors. Some relatives thought they could wait the war out in Europe, but all that remains of them is in Auschwitz’s death records. I recently learned my great-grandmother’s family were devout Nazis. My great-granduncle died fighting the Soviets in Stalingrad. Having them as my family, too, makes me humanize the perpetrators and enablers, more than they deserve. Before the war, the United States turned away Jewish refugees (including Opa’s family). It’s weird to call a country home that didn’t want my relatives and wouldn’t have wanted me then either.

I’ve always been cautious about revealing my Jewish heritage. I was named “Eric” and not “Nathan” because Oma and Opa feared “Nathan” would’ve been too identifiable as Jewish if another Hitler rose to power. In such a case, I wouldn’t want too many people knowing my heritage because it would only take one person to snitch. Opa’s uncle and cousins went to Auschwitz because a neighbor to their hideout snitched.

The recent Israel-Palestine flare-up further complicates my views on the conflict. I love Israel because it was a safe haven for Jews during the war, and it’s a strong, prosperous, free and high-achieving country. I’m proud it has defeated repeated regional attacks. It’s a bright spot in the region. But, Israel’s government has been disgraceful and embarrassing: expelling Palestinians, the 1982 Lebanon War, complicit in slaughters, infringing on Palestinian sovereignty and civil liberties and inflicting disproportionate violence on Palestinians. I’d rather the Israelis and Palestinians share the land, but if not, I support the two-state solution. In any case, the Israeli government, especially, needs to stop treating the Palestinians like children and actually come to the table.

My identity has been predominantly defined by being Jewish. From a young age, I went to temple, observed Shabbat and learned the Yiddish phrases passed down from my great-grandparents who emigrated from Russia. Judaism is not only an observed religion but a set of values and cultures that teaches individuals to be kind to others and demonstrate determination in the face of adversity. While I always wore these values with pride, my friends often couldn’t understand why being Jewish was so integral to my identity.

Like any person of the Jewish faith, I have faced many waves of anti-Semitic remarks throughout my life. The recent escalations of conflict between Israel and Palestine have fueled these sentiments and left the Jewish community vulnerable to intensified hate and discrimination. Jews have been subject to a lifetime of targeted killings and hate towards people that only wish to promote peace and unity on Earth. I am proud to be Jewish. Through my faith, I have found an accepting and open community always striving to be the best version of themselves. I found friends who understand what it’s like to be subjected to a typical Jewish mother’s guilt. I found others who sympathize with the struggle of giving up challah for a week during Passover. I found a bond so strong that even a mountain of hate cannot break our community.

Being Jewish means fighting for your beliefs and prevailing even when the entire world is against you. We live in an era with an intense political divide and ever-growing partisanship. I implore you to not let political opinions serve as an outlet for anti-Semitism and the targeting of Judaism. No, Jews are not trying to take over the world. No, our religion does not seek to be exclusive or harmful. Judaism is a strong tie for many into a community we call home. I only wish that others could respect our home.