Though Santa Barbara County is in the orange tier of the state’s reopening plan and has administered  313,005 COVID-19 vaccines, local restaurants have seen progression in their businesses between March 2020 — the beginning of the pandemic — to the present.

At Woodstock’s Pizza, the initial declaration of the pandemic and the resulting quarantine required major changes to keep the business alive. 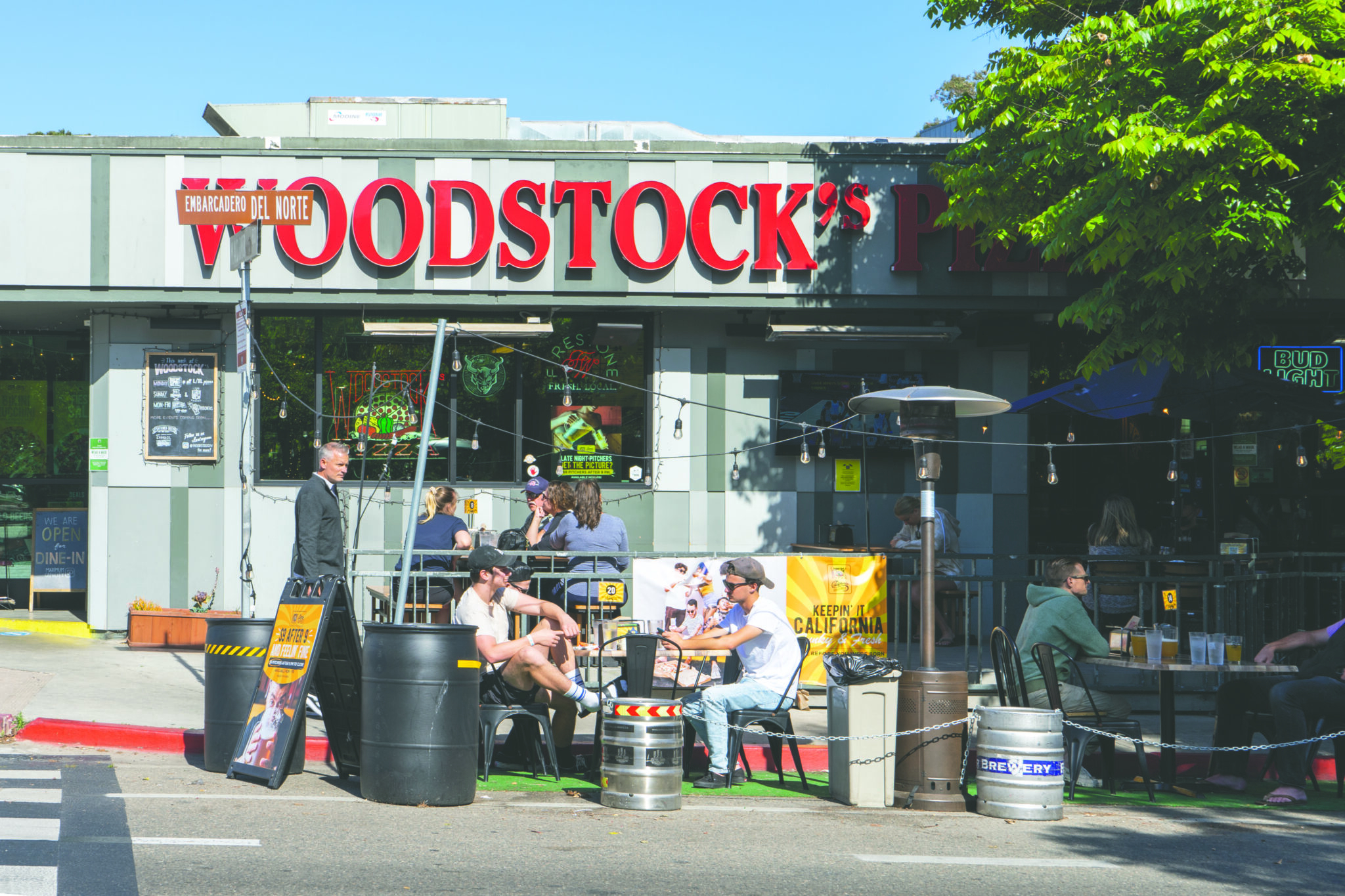 At Woodstock’s Pizza, the initial declaration of the pandemic and the resulting quarantine required major changes to keep the business alive. Sophia Lovell / Daily Nexus

“We had to shift gears a lot of times when things first hit in March,” Bryan Mathewson, general manager at the I.V. Woodstock’s, said. “We were all doing a lot of research, trying to figure out what the best thing that we could do was.”

“We got our whole staff wearing masks before it was officially mandated [in the county],” he continued. “We were all taking notes and learning from what a lot of other businesses were doing.”

Because Woodstock’s Pizza focuses on food delivery, Mathewson believed that the business had an advantage during the pandemic. However, they said that Woodstock’s did lose significant dining room businesses and beer sales. Although they were originally unable to find a solution for the loss of on-site dining due to COVID-19 regulations, Woodstock’s was able to make up for the loss of beer sales by creating a beer delivery service using mason jars.

However, Mathewson said that the employee loss at the beginning of the pandemic created significant losses to the establishment, as well as to the restaurant’s sense of community.

“I think across every Woodstock’s store, there was a kind of exodus, where we had a lot of people, either due to their parents or their personal feelings, no longer want to work in food service,” he said. “In I.V., there was a huge portion of the staff that left, probably about half or more.”

Mathewson said that in the fall and winter months of COVID-19, Woodstock’s was overstaffed every week in significant numbers to prepare for the possibility of staff members quarantining.

He added that Woodstock’s ensured that employees would stay home when feeling sick to prevent a possible COVID-19 spread. In addition, the company strictly enforced emergency paid sick leave and required workers to have proof of 10 days without COVID-19 symptoms or a negative COVID-19 test in order to come back to work.

“We didn’t want to be in a situation where workers had to choose between their money or employment,” Mathewson said. “We were very on top of getting people compensated for their time away from work.”

Like Woodstock’s, Bagel Café has primarily focused on takeout orders even before COVID-19 hit and wasn’t heavily impacted by the on-site dining closures, according to fourth-year global studies major Gigi Jackson, a server and barista at Bagel Café.

Jackson said that Bagel Café implemented a one-party store capacity as a safety precaution, although the measure became difficult to implement at times when parties picked up to-go orders while another party was ordering.

“Sometimes it’s difficult because we call the orders out and put it on the counter, so a party might be ordering but then another party might be coming in to get the bagels, so there’s some overlap with that,” Jackson said. “But we definitely do our best to police that … And we’re not afraid to speak up and say, ‘one party at a time.’”

At Naan Stop, like other food establishments, COVID-19 safety precautions were enforced in response to the Santa Barbara County Public Health Department, according to an employee at the establishment.

“I’ve been advised by the health department … to wear masks and [implement] social distancing,” an employee at Naan Stop said. Citing privacy concerns, the employee asked to remain anonymous. “So we took care of that.” 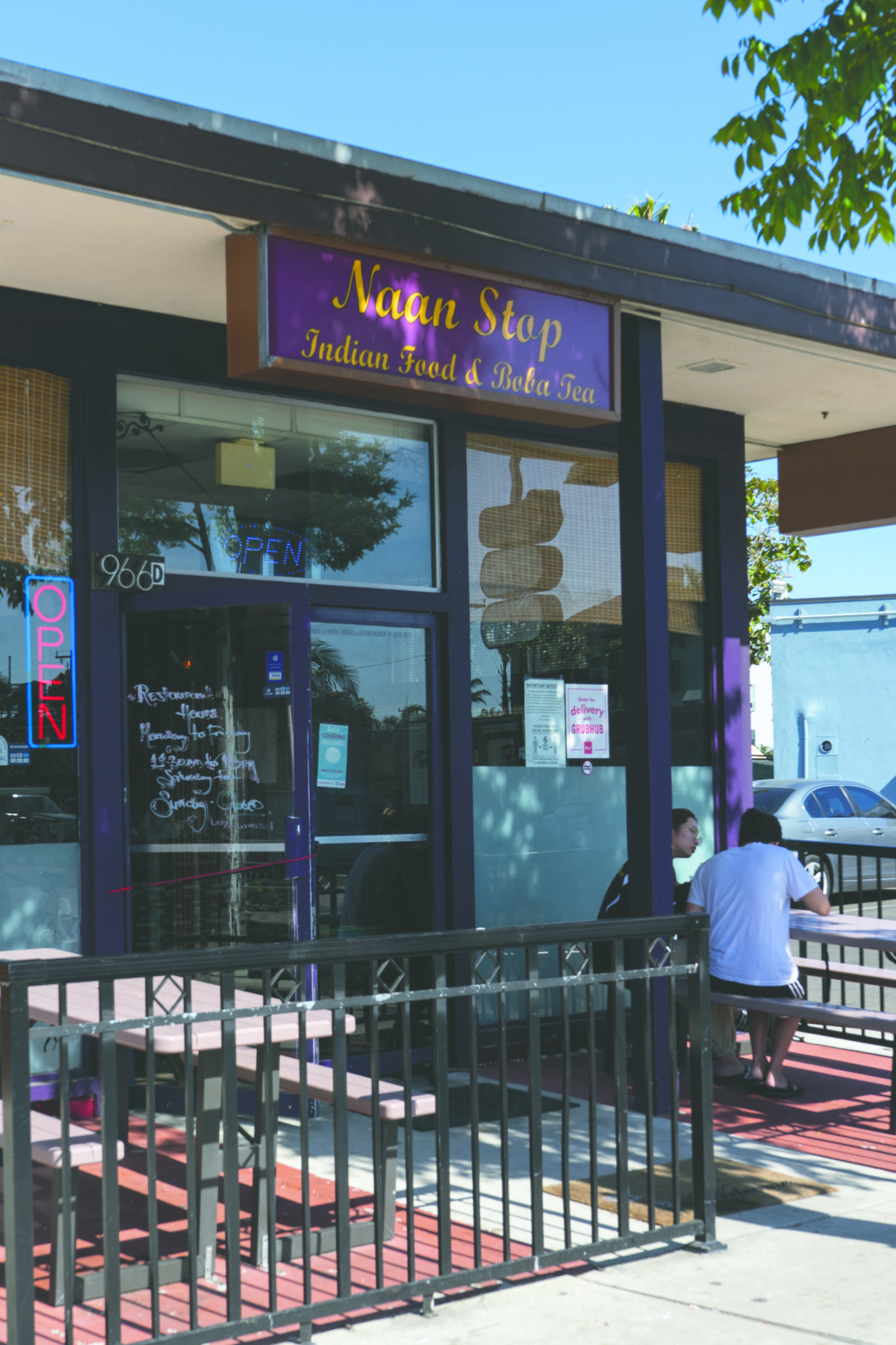 At Naan Stop, like other food establishments, COVID-19 safety precautions were enforced in response to the Santa Barbara County Public Health Department, according to an employee at the establishment. Sophia Lovell / Daily Nexus

UCSB, Santa Barbara City College and other neighboring schools closing also created a loss of some business for Naan Stop.

Unlike other local businesses, the Isla Vista Food Co-op was initially met with a surge of sales last March, with swarms of customers panic buying after the announcement of the pandemic.

“We were immediately inundated with panic-buying that happened basically across the grocery retail industry,” Allison Baymiller, marketing manager at the I.V. Food Co-op, said. “We had record amounts of food coming off of our shelves to the point that we were having a hard time keeping things stocked. It was immediate chaos.”

Baymiller said the I.V. Food Co-op had to put sale limits on such items such as beans, toilet paper and rice that were being bought in large quantities during the panic-buying season.

Like other businesses, Baymiller said the Co-op saw a significant decline of staff members, with 10 staff members leaving. This was the result of many part-time workers, many of whom were university students, leaving I.V.

Despite this loss, Baymiller said the I.V. Food Co-op ensured that their staff members felt supported financially during the pandemic, adding an additional $2 per hour COVID-19 emergency hazard pay for all non-manager employees.

“That means that our current starting wage with hazard pay is $15 an hour,” Baymiller said. “The goal is to not remove that $2 an hour and keep it at $15 [from here on out].”

Baymiller said that after tackling health and safety protocols the next step in enforcing COVID-19 regulations was limiting the number of customers allowed in the store at one time. The establishment received almost 60 to 70 customers per hour before COVID-19 and now receives about 30 people per hour.

“With that small customer base, we have been focusing on ways to grow basket size per customer and what they spend, the value they got from the store,” Baymiller said. “That’s been a really big conversation that our interim general manager has been very much pushing.”

Baymiller described the plan to enforce safety against COVID-19 as “going above and beyond.” She said that a consistent supply of gloves for all staff members was readily available at all times and disposable masks were available for customers who entered the store without one. Another major strategy was requiring customers to sanitize their hands before shopping by placing hand sanitizer right at the door.

“We would probably catch 85% of customers coming in and tell them, ‘make sure you sanitize your hands,’ and that seems to work out pretty well,” she said.

Prior to the pandemic, the Co-op would set up a table on campus and participate in event sponsoring to communicate directly with students. Now, the effort has shifted to an online format through their Instagram and Facebook pages, their website and their newsletter.

Baymiller emphasized that the bulk section of the I.V. Food Co-op, where customers could bring their own containers and self-serve desired items like spices and teas, has been hit the hardest by the pandemic.

“It was a huge, huge part of the store and part of our identity,” she said. “It’s a great, great option for inexpensive grocery shopping and for zero-waste grocery shopping, all of which aligned with our own values.”

However, Baymiller noted the silver lining of the pandemic as the lessons I.V. Food Co-op learned amidst COVID-19.

“We learned that the community is still here for us, which is amazing,” Baymiller said. “We learned how resilient we could be and how many our staff is. The amount of commitment and care that came from everyone, all working together to make sure the store kept running — there’s no amount of gratitude that can repay that.”

What about the business that did not survive? There are many empty storefronts. Your article could enumerate those.