The University of California Board of Regents convened on May 13 to discuss a new multiyear tuition and financial aid plan that would increase tuition for students enrolling in UC schools beginning in 2022. 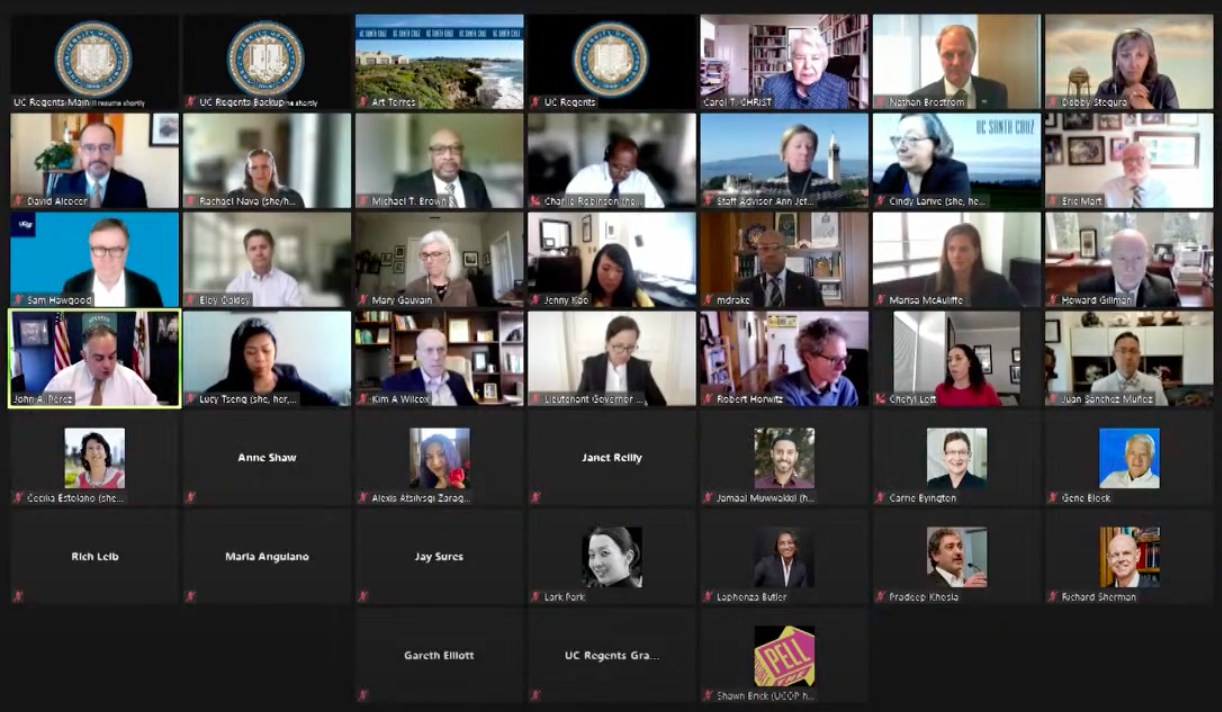 The Regents met last Thursday to discuss the multiyear tuition and financial aid plan. Courtesy of the UC Regents Livestream

The plan itself proposes assigning a tuition and fee level to each incoming cohort of students and keeping that number flat for six years following enrollment, according to the executive summary.

For each new cohort, tuition rates will increase by a select percent based on the tuition from the previous year. For example, there will be a 2% increase of tuition from the 2021-22 entering cohort added to the tuition of the 2022-23 entering cohort, along with an additional increase based on that year’s inflation rate. Graduate students’ tuition, however, will increase uniformly at a flat rate, rather than by cohort.

The plan was originally proposed at the Regents’ March 2020 meeting but was tabled until the May 13, 2021 meeting due to the pandemic. The Regents will vote on this plan in their upcoming July meeting.

The presentation provided details on the plan and outlined the three main foreseen benefits of the tuition increase: Students and their families can rely on “predictable tuition” for better financial planning, campuses can receive more funds to improve their quality of instruction and services and financial aid and affordability can be expanded for students in need, according to the presentation.

“This is our chance to … provide everyone, [including] financial aid officers all across the system, with some sense of what the revenue will be for financial aid in the coming year, and be able to communicate that with students and families months sooner than we’ve been able to in the past,” Wilcox said.

UC President Michael V. Drake supported the plan at the meeting. Drake believes that the increased tuition will help students graduate on time, preserve academic excellence and critical support services and provide predictable tuition rates and increased financial aid. He added that the number of students the UC served from the 2000-2001 academic year to the 2019-2020 academic year has increased by 67%, while funding per student has decreased by 33% . According to Drake, these factors call for more revenue to support all students.

“The UC has been a national leader in providing opportunities for students of all income levels, and now, we can be an adopter of a model that creates stability and predictability for all of our students and for the university,” Drake said.

Continuing graduates and undergraduates from the 2021-22 school year and prior will not be affected by this proposal.

The plan was met with concerns from many of the regents.

Regent Eloy Ortiz Oakley, chancellor of the California Community Colleges system, said that promoting the tuition plan as addressing affordability is problematic because tuition increases will be tied with inflation rates. Consequently, steep inflation rates in the future would result in steep tuition and fees.

Regent Michael Cohen echoed Oakley’s concerns, saying that the plan is misleading. According to Cohen, less than one-third of tuition goes toward financial aid, contradicting what is stated in the plan.

“The only way I’ll be prepared, as of now, to vote for this [plan] is if we have a way to actually get to one-third [of tuition going toward financial aid] within a relatively short order, say, three to five years,” Cohen said. “In all of our messaging, we certainly imply that one-third of in-state tuition and fees go toward financial aid. We keep misleading students, the public, parents and everyone involved but we’re not actually there yet.”

Student Regent Jamaal Muwwakkil said that the tuition increase pushes the “burden” of increasing financial aid and supporting lower-income students onto other students themselves.

“‘In what ways are we a public institution?’… [That] needs to be a question that’s at the front of our minds as we consider who is subsidizing the education directly and who bears the burden in that way,” Muwwakkil said.

Regent John A. Pérez, chair of the Board of Regents, said that the Regents have the right to call back the plan at any time if it proves to have negative outcomes.

Student Regent Alexis Atsilvsgi Zaragoza said that the Regents should take into consideration the issues that lower-income students might have in paying for the tuition increase.

“What we see as Regents is this increase of tuition, better financial aid, giving money to programs that need it. But what students see is, ‘All these people do is keep taking from us, when in the world are they going to give to us, when am I going to see the day when I am financially stable?’” she continued.

Zaragoza’s concerns were voiced prior to the Regents discussion during public comment by UC Student Association (UCSA) President Aidan Arasasingham, who spoke on behalf of the UCSA.

Arasasingham emphasized that the increase would not benefit many students, such as low-income and foster-care students, immigrant students who don’t qualify for in-state tuition and LGBTQ+ students whose parents refuse to pay for tuition.

“The UC Student Association continues to have concerns about this cohort-based proposal, because it moves us further from fulfilling the social contract of the UC education as a public good,” Arasasingham said.