The Daily Nexus
Events
Extravaganza 2021: UCSB Welcomes Comedian Hasan Minhaj
May 18, 2021 at 8:58 am by Marisol Cruz 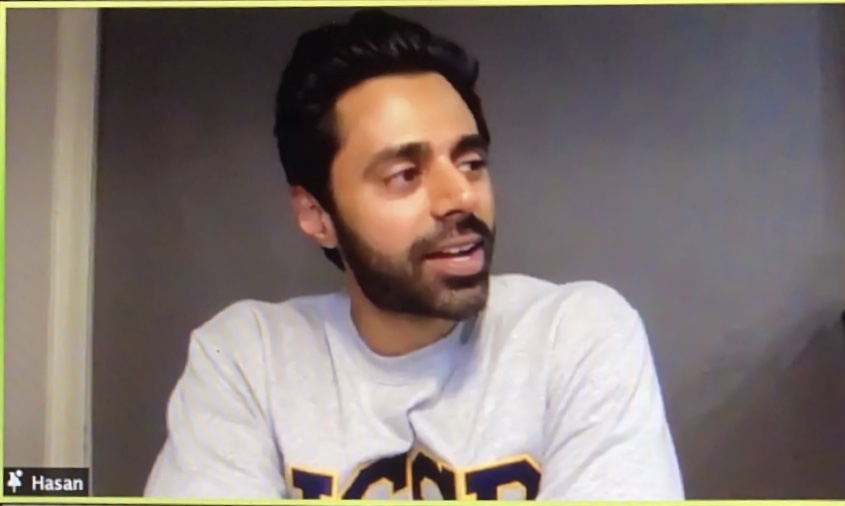 To kick off this year’s Extravaganza, the annual concert hosted by the Associated Students Program Board every spring quarter, UC Santa Barbara welcomed Netflix’s “Patriot Act” creator Hasan Minhaj on Saturday, May 15 for the first night of virtual performances.

A former correspondent on Comedy Central’s “The Daily Show” as well as star of the Netflix special “Homecoming King,” Minhaj is one of the freshest voices in comedy and politics. Minhaj brought his witty spirit as he discussed representation in the media industry, encouraged students to bet on themselves and started a riveting discourse on Oprah Winfrey.

Minhaj appeared on the screen donning a UCSB sweatshirt and gave a shout out to the Gauchos as the UC Davis alumnus recognized a common “UC kid” solidarity before he began his monologue. He revealed that, in his preparation for his remarks, he began by reminiscing about his time as a UC undergraduate and the past year in the pandemic, adding that he came to realize the “fragility of life, opportunity and plans.”

The actor began to unravel a story with these themes, sharing that his dream university was actually UCLA. (We’ve all been there.) While he was touring the campus after his acceptance, a student warned Minhaj about the competitiveness and rigor of the school and suggested that he attend UC Davis to maintain a higher GPA for graduate school.

On the drive from Los Angeles to Davis, his hometown, Minhaj made the decision to not attend UCLA, but he candidly stated that he now regrets that decision. While his time at Davis allowed him to find his passion and meet his wife, “the two most important decisions of his life,” Minhaj disclosed that he felt that he had sold himself short.

As an undergraduate, Minhaj watched a Chris Rock comedy set for the first time, and while everyone around him was laughing, Minhaj realized that “this is funny speech and debate.” As a debate kid in high school, Minhaj divulged that he didn’t realize that he had a valuable skill “to take a complex topic, boil it down to its core and construct an argument in a funny way,” which Minhaj analogized as distilling coffee into “comedy espresso.”

The two-time Peabody Award winner explained that he took the initiative to sign up for a comedy club and eventually became the school opener for bigger acts, mentioning that he opened for then-upcoming comedian Ali Wong. When Minhaj struggled to find work in Hollywood, he created comedy sketches on YouTube, which garnered the attention of Jon Stewart, the then-host of “The Daily Show” on Comedy Central. Minhaj described these events as inflection points when he took a chance on himself and reaped the rewards.

In 2017, Minhaj produced an off-Broadway run of “Homecoming King,” which has now been developed into a critically-lauded Netflix special, before he and his wife used their life savings to shoot a pilot for “Patriot Act,” a show centered around deep-dive investigative pieces. Netflix went on to pick up the series that now has an Emmy Award and a Peabody Award to its name.

Associated Students (A.S.) Program Board’s Cultural Events Coordinator Gabriel Reyes later joined Minhaj on screen to begin the Q&A, and as the comic often covers issues of identity and representation in his material, one of the first questions Reyes asked Minhaj was about the changes he has seen in the industry in terms of diversity. In response, Minhaj discussed the “social media revolution,” or how he views the impact of social media in testing and breaking traditional media norms. He added that the media industry now more broadly takes into account the voices of the public and is more receptive to meeting the demands, and that the people have been demanding “to see voices that look like us and feel authentic.”

Another student’s question forced Minhaj to rank the UCs honestly, to which he cheekily responded, “UCSB is [number] one, obviously — what am I going to do, not put it there?” Next on the list was UC Davis, his alma mater, followed by UCLA and UC Berkeley “to make [his] sister who graduated from Berkeley mad.” UC Merced and UC Riverside were tied for the bottom as Minhaj declared that “UC Santa Cruz shouldn’t make the list.” When Reyes mentioned that he forgot about UC Irvine, Minhaj quipped, “If I want to go to the In-N-Out there, I’ll go to UC Irvine.”

Minhaj then pointed out the beauty of the city of Santa Barbara and asked, “How close are Oprah and Meghan?” Audience members responded through the chat that Oprah is booked to be the commencement speaker for this year’s graduating class, to which Minhaj joked, “If Oprah pulls up on Zoom, y’all should riot.”

As the night came to a close, Minhaj noted that he served on his own university’s program board and that he knows how competitive it is to book acts, he graciously thanked UCSB students for their warm welcome and enjoyable conversations.