The Daily Nexus
Sign of the Times
Reckoning With Race: Opinion Staff Writers Reflect on AAPI Heritage Month
May 8, 2021 at 9:11 am by Opinion Editor 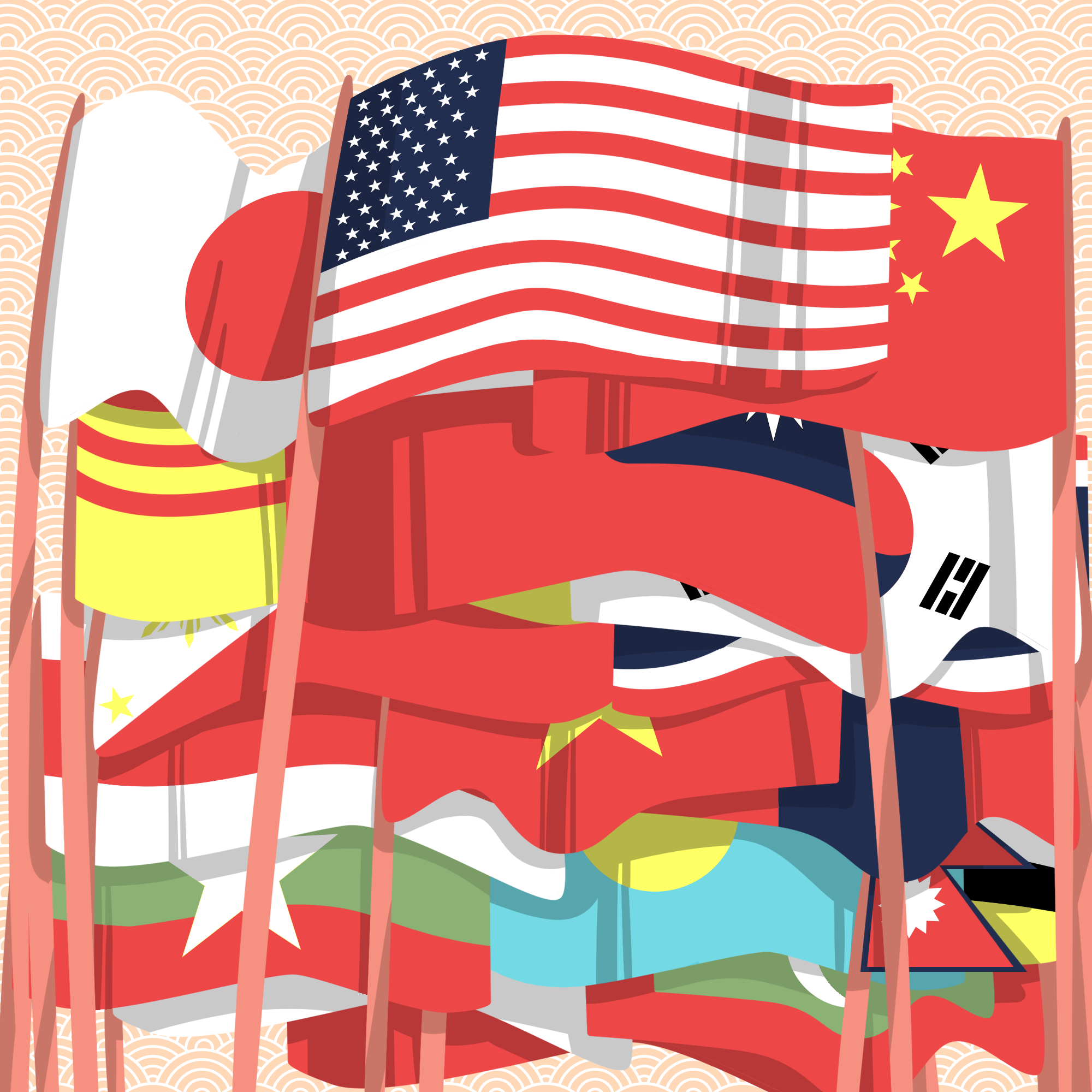 The month of May is dedicated to acknowledging the impact that Asian American and Pacific Islander (AAPI) communities have always had on the history, culture and achievements of the United States. Here is a collection of our staff writers’ reflections on their experiences as Asian Americans.

America has made discrimination against Asians acceptable. It is coded into policy, encouraged by institutions and hidden behind compliments. Universities reject us. Embassies deny us. Corporations spite us. People kill us.

Asians might only make up 5.9% of the U.S. population but that has never stopped those who accuse us of stealing jobs, spreading sickness and overrunning neighborhoods. People do not see us as a minority, assuming we are smart, hardworking and well off. Even in a time of turmoil people turn a blind eye because they think they have beaten us into submission and we will never ask for a seat at the table.

You wear our culture like a costume. You accept our food when it suits you. You tout our greatness as long as we know we will never surpass you.

We wave your flag with pride. We stand in fight for your forgotten people. We support your country like there is no evil.

But, we are not what America has made us out to be. We are hardly America’s model minority. We notice your hypocrisy.

I was five years old when I started to feel like an alien. The first grade teacher at the new school called my name but the words afterwards — every syllabus was TV static, a foreign white noise gurgling in my hollow ears. Her eyes burned into mine, looking for connections I could not see. Twenty students stared at me, expecting me to perform a magic trick I never learned. Was I in the right class or the right country?

Whenever I asked my mom if she remembered my first words, she told me I did not have any. Living in Los Angeles, strands of ethnic cultures were fed to me. My ears were so full, the words flowing out of my mouth tangled and crinkled and dissipated in the wind. Gibberish. A mess a lot of American-born Chinese people call Chinglish.

The Founding Fathers carved our nation into neat rows of monoculture. I did not know which row I belonged to: American, Chinese or Vietnamese. I could barely hold a conversation in Mandarin or count to 10 in Vietnamese. I don’t like baseball. I wonder if eating avocado toast with a sprinkle of Everything but The Bagel Sesame Seasoning Blend makes me American.

Then, I started cooking plant-based in college. I wanted to celebrate my Chinese and Vietnamese heritage by cooking these dishes in different weeks. I wrote down my childhood favorites, searching for the proper spellings and pronunciations. I could not think of enough meals to fill a week. And then it hit me. This is what it means to be Asian American — to be abundant in multiple, to swim in all the above worlds. We were stretched between language and cultural boundaries. We had spider threads stringing our souls together. Boba, xiao long baos, BTS. Light one, we all catch on fire.

As a half-white, half-Asian woman, I used to feel pulled between two different cultures: Japanese and American. Now, I wonder whether I even want to identify with either of them.

I have long had issues with American nationalism and have almost always had a hard time proudly proclaiming myself as an American. To be American is to be perceived as disrespectful toward other countries, as foolish within our own country (for example, other countries are shocked about the state of American gun control, healthcare and education in comparison to their own) and as self-righteous and close-minded. And rightfully so — American history indicates that these have been issues for a long time.

However, I felt a real sense of pride in being Japanese until recently. My Japanese family has been in America for a long time and forcibly assimilated long ago. Thus, I have only ever been taught about Japan through the lens of the American school system. My pre-college teachers painted a portrait of Japan as an independent and strong nation, fortified by values of education and loyalty. Even when devastating events such as World War II and the Korean War are mentioned, they are brushed off as relics of the past.

This portrayal of Japan as a benevolent culture is further perpetuated by pop culture, which idolizes Japan as the home of ramen and sushi, the birthplace of your favorite anime and the precedent for great public transportation and cleanliness.

Rarely did I hear mention of Japan as a colonizing, imperialistic force. But now that I am older and more educated, I have realized just how much Japan reminds me of the worst parts of America. Both countries have rampant issues with nationalism, racism, sexism and an attitude of dominance.

Do I really want to feel allegiance with any country that demonizes its enemies and destroys all in its path, any country that refuses to acknowledge or apologize for their mistakes, any country that believes itself to be the overarching force that should police all others and force them into line?

I know that I will always be both Japanese and American. And it is precisely because I want to proudly claim both of those identities that I vehemently strive for these nations to be better. To me, being Asian American means that we have twice as much responsibility to ensure that we do not become complicit in these systems — both in America and in our Asian countries.

I’m proud to be Asian but I often don’t feel Asian enough. I like being different. My half-Asian appearance makes me unique in most places. I love my Asian heritage and family history. My heart is warmed that perception of Asians has improved remarkably, from vermin raping white women and stealing jobs to overachieving, obedient and hospitable people with great culture (food, anime, K-Pop).

Yet, I must continually be reminded that I’m Asian. I’m reminded by my reflection, interactions with other Asians and dating (I’m some people’s type but not others’). When I see myself from outside my body, I’m like everyone around me, white. I grew up in predominantly-white, affluent suburbs. Most of my friends are white. I don’t speak Asian languages and I’ve never been to Asia. I’m insecure about my chopstick skills. I receive confused looks at Asian restaurants due to my mixed appearance. I’m privileged and have never experienced racism. My Asian roots are distant because my full-Asian mom was born here too. But, tragedies involving Asian American kids hit differently because they look like me and I’m still mad about the L.A. Riots.

The extent of my Asianness is being somewhat familiar with Asian food at restaurants, my mom making Asian recipes from childhood or Facebook, having done Kumon, relatives and comfortably making Asian stereotype jokes. I represent an Asian American experience, but not one that most Asian Americans experience.

The recent anti-Asian hate isn’t surprising. Some see us as human calculators, exotic sex objects and/or aliens — not real and complex people. When disaster strikes and Asia’s involved (World War II, COVID-19), those people see us as Americans in name only. This is our country too. However, I’m confident we can win over haters with increased representation in media and politics, where we’re whole and complicated individuals, not one-dimensional sheep.

I am so sick of being Asian. This isn’t to say that I don’t love my culture or my identity, because I do, and it’s taken me a long time to get to the place I am right now. But I am just so fucking sick of being Asian to an audience.

Being Asian American, to me, is bitter. It’s misdirected anger. A childhood full of shame. Begging your mom not to pack kimchi in your lunch. Being embarrassed to bring your dad to your orchestra performances. Crying about it in front of your parents, 10 years after the fact, because you feel so ashamed for hiding them all your life.

But worse than experiencing a decade of self-hatred is feeling that my trauma justifies my existence. That, perhaps, the only valuable thing I have to contribute to the progression of society is my trauma.

Being Asian and a woman are both inarguably essential to my identity, which I am proud to be. But sometimes I want to be more than an Asian woman. I don’t want to feel inclined to share my experience to an audience, as if my identity as an Asian woman has no other purpose than to educate someone else.

I am not your lesson.

Disney’s Raya made history as the first Southeast Asian princess. Categorized as a foreign language film, “Minari” inspired a redefinition of what it means to be American and what an American story can sound like. Chloé Zhao became the first woman of color and the first Asian woman to win best director for “Nomadland” at the 93rd annual Academy Awards ceremony. More Asian Americans are serving as political representatives than ever before and using that opportunity to raise their voices for our entire community.

The Pacific Islander community has fought more than ever for exposure, recognition and reform in 2021. There are victories every day, from Pacific Islanders making history in the rugby world to scholars such as Professor Haunani-Kay Trask finally being recognized for her hard work on a national level. And as Pacific LGBTQ+ activist groups speak out following the death of icon Polikalepo Kefu, the demand for change and acceptance continues.

The AAPI experience, like our culture, our people and our history, is not a monolith. Our lives make up an intricate tapestry of the human experience. Being AAPI means something different for everyone. Our experiences are unique, and the way we identify ourselves and relate to our community is dynamic.

We hope that these pieces have highlighted the vast diversity of conversations about the Asian American experience. Our lives are punctuated by both joy and suffering, and we are entitled to express that — not for any audience or for the “learning” experience of others.

This May, we write for ourselves.

Introduction and Conclusion by Syd Haupt and Toni Shindler-Ruberg