At its March 25 meeting, the Isla Vista Recreation & Park District board of directors voted to reintroduce a proposal to return People’s Park, the only remaining park in Isla Vista available for houseless residents to legally reside in, back to its recreational capacity. All houseless residents would have to relocate as a result. 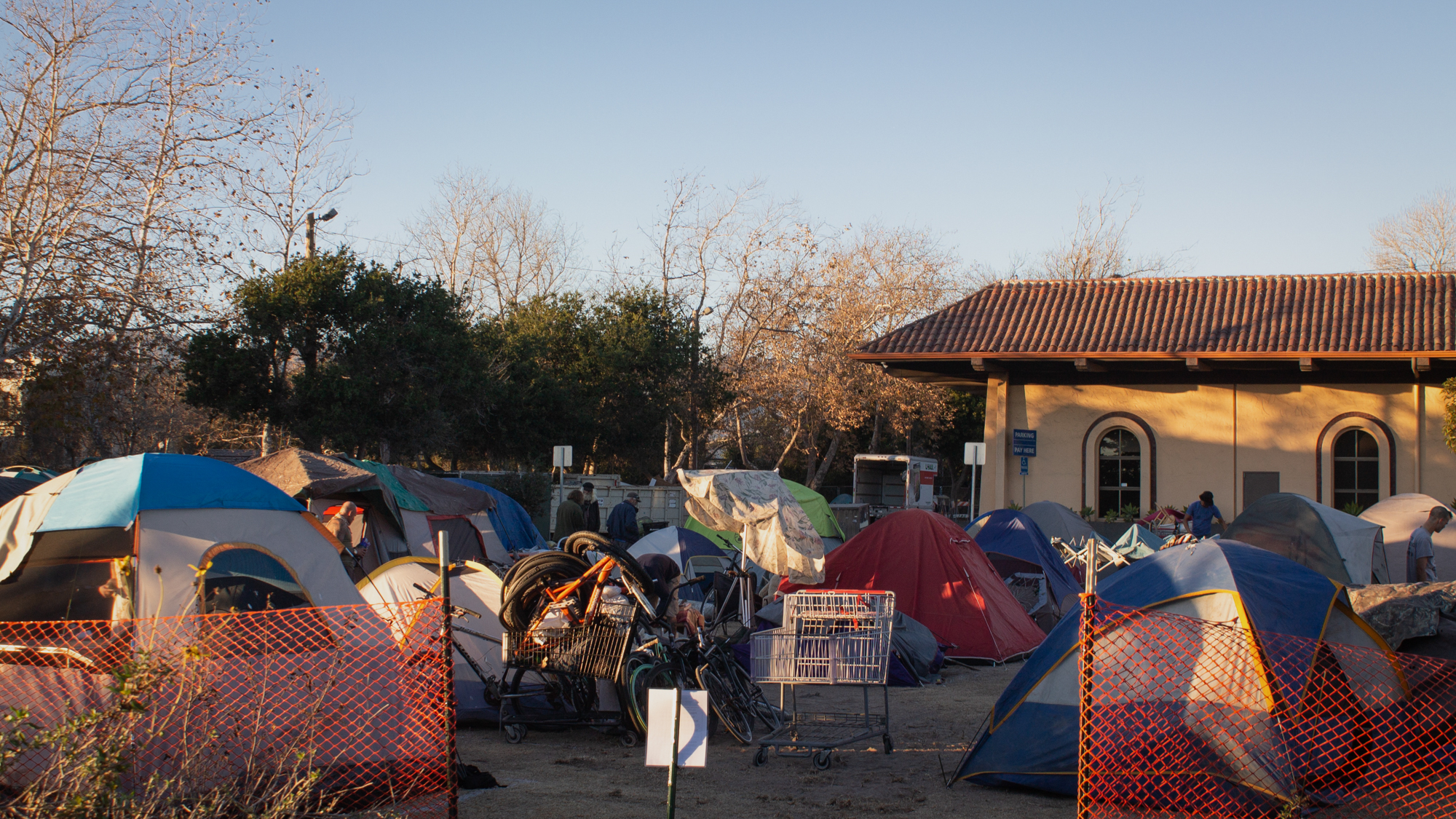 After being offered People’s Park as a relocation space when IVRPD cleared out Anisq’Oyo’ Park, houseless residents face the possibility of another relocation. Kaiyi Yang / Daily Nexus

The proposal is currently being worked on. The board did not say when they would bring back the proposal to vote on it.

As the number of houseless residents in Isla Vista increased over the course of the COVID-19 pandemic, many congregated in various parks throughout the college town. With a rising population in close quarters to the local parks and a flurry of new fire hazards declared by the county fire marshall, IVRPD cleared three houseless encampments in Isla Vista in late November: Camino Corto Open Space, Sueño Orchard and Del Sol Vernal Pool Reserve.

In December, IVRPD closed Anisq’Oyo’ Park — a location where a majority of I.V.’s many houseless residents lived — and suggested that the population residing in Anisq’Oyo’ relocate to People’s Park or the pallet homes.

The March 25 meeting’s agenda said that IVRPD’s decision to transition the park back to its recreational capacity is predicated on the park departments lack of finances, the environmental degradation of People’s Park and the health risks currently posed to houseless residents and park visitors.

Additionally, various IVRPD members, including Darryl Scheck, Service Employees International Union Local 620 representative for IVRPD, said during the March 25 meeting that they don’t have the experience nor expertise to work with houseless residents and connect them with necessary resources. Scheck added that those who work in social services are better equipped to provide care and resources to houseless residents.

In addition, several presenters and stakeholders, such as Third District Supervisor Joan Hartmann, said during the meeting that the frequency and intensity of drug use at People’s Park presents health risks and warrants a space where houseless residents can work with professionals and seek drug-related treatment.

“Some of the medical professionals also believe that there are folks in People’s Park [who] are unlikely to survive through June at current levels of drug use,” Third District Supervisor Joan Hartmann said.

Gina Fischer, district representative for Hartmann, said that the medical professionals who made that comment were with Doctors without Walls and added that one person used their stimulus check in the fall “to purchase significant amounts of illicit drugs.”

According to Fischer, health professionals and shelter workers were worried “that with the latest round of stimulus funding, there would be a significant uptick in illicit drug use, posing a threat to lives.”

Others, such as IVRPD Director Ash Valenti, pointed out that some houseless residents want to stay outdoors and avoid enclosed spaces after experiencing PTSD or having bad experiences in homeless shelters. And for many houseless residents, only in their current situation are they able to access food, water, shelter hygiene, according to Katie Maynard, the event manager and sustainability coordinator for UCSB.

According to a presentation by Albers during the March 25 meeting, there are currently 45 people residing in People’s Park. Of those 45 people, seven are on the waitlist for pallet homes and 11 have declined to live there. In addition, 55% of the residents staying at People’s Park were not staying at an I.V. park prior to the closures of Anisq’Oyo’, Camino Corto Open Space, Sueño Orchard and Del Sol Vernal Pool Reserve to houseless residents in November 2020.

Despite IVRPD and other local organizations working to help houseless residents in I.V., many houseless residents have now been asked to relocate two to four times over the last six months. Gina Sawaya, a Food not Bombs volunteer and I.V. resident, voiced concerns about the repeated displacement of houseless people in I.V. during the March 25 meeting.

“Again and again, community members have begged and petitioned and emailed to protect our houseless neighbors from being arrested and displaced during a pandemic,” Sawaya said. “All of the safety issues you identified will not be mitigated by closing People’s Park. It’ll just make it not your problem, which is probably the goal.”

“The county or another agency may provide temporary accommodations like hotel vouchers to draw people away from People’s Park,” she continued, “only for them to have nowhere to go once the voucher runs out.”

Initially the county, Hartmann said, thought of People’s Park as a “waiting room” for the pallet homes — though this plan didn’t work out as originally thought.

“We initially thought of People’s Park as something of a waiting room for the pallet park. Grids were established and outreach services have been ongoing,” Hartmann said. “But we had not given People’s Park the kind of intense focus required for this population. So instead of Pallet Park elevating aspirations in People’s Park, the People’s Park is creating challenges that threaten progress in both places.”

The temporary nature of this “waiting room” has once again displaced houseless residents.

“I think I could have told you that the People’s Park was not just a waiting room, and that there’s always going to be people that want to camp. You talk to houseless people in Isla Vista and a lot of them are really proud of that,” Valenti said.

Despite reservations from board members and public commenters, the board ultimately voted to reintroduce the proposal so that IVRPD can find new routes to tend to the situation at People’s Park, IVRPD Director Mia Rahman said.

“I personally don’t see any reason not to [vote yes], because we will either be in the position we’re in now, or we’ll have a good alternative and some sort of plan [to] transition that takes into account all of the groups and that the board agrees on and feels confident that it will help in our process,” Rahman said.

There is no set date for the staff to come back with a proposal, though Pegeen Soutar, IVRPD director and president, said that it may take some time for staff to return with formal policies.

“[I’m] not sure exactly when [the proposal] will be brought back. I trust that everybody will work hard on this and as soon as they can and will get to us, but let’s do a good job,” Soutar said. “It may not happen right away — coming up with the right answers. There’s some complicated pieces to this puzzle [that] might need to be figured out before a plan is brought back to us.”