During the historic California drought from 2012 to 2015, warm temperatures and piddling precipitation took the state for a whirl unlike any other. In the 2015 wet season, the Sierra Nevada snowpack reached its lowest peak in half a millennium, while reservoirs left boats grounded and farmers with little water to tend their crops and livestock. 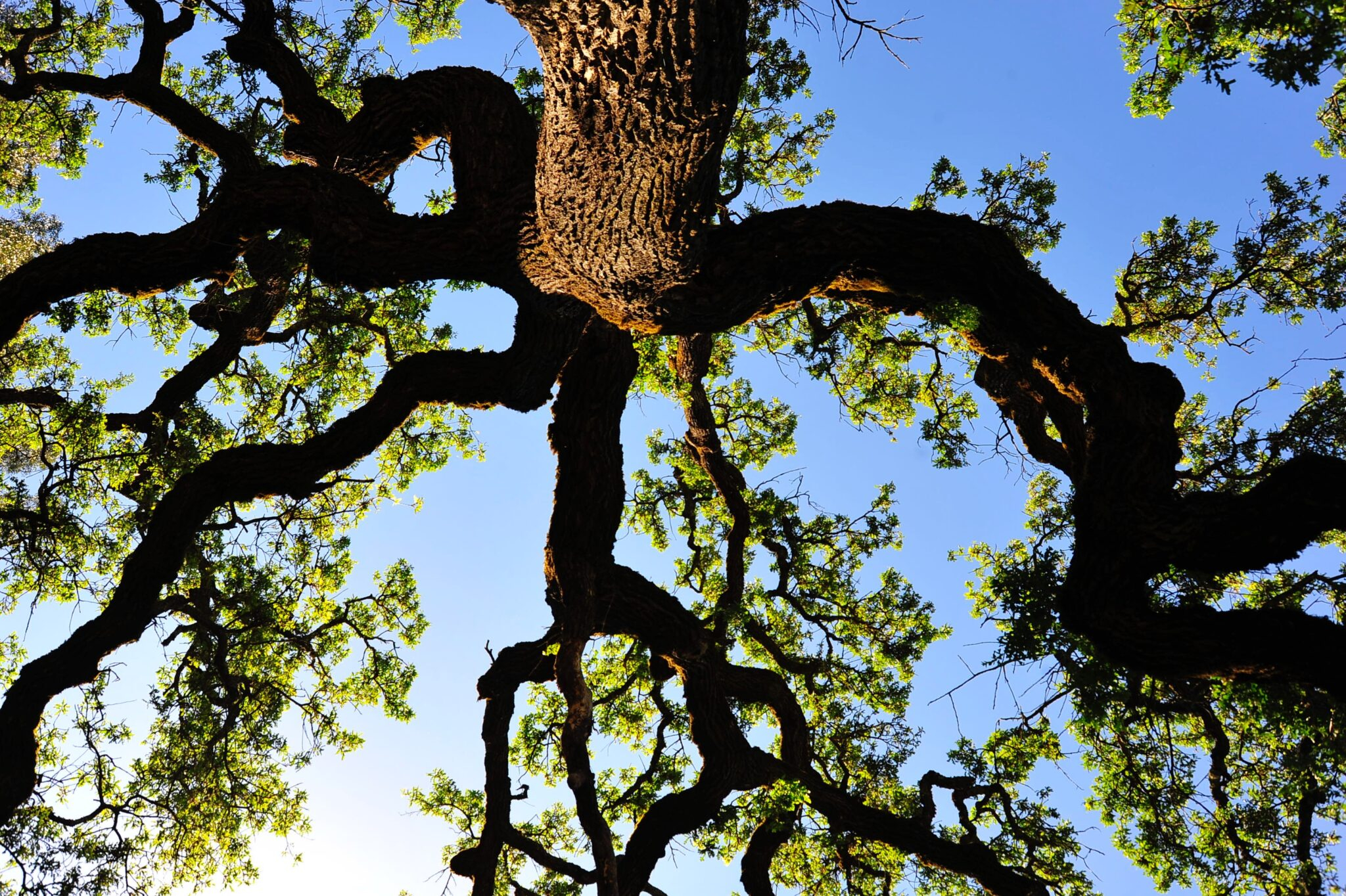 The canopy of a valley oak tree (Quercus lobata). Courtesy of Leander Anderegg

Then, in the 2016-17 season, the state was hit with storm after storm, piling onto the snowpack, replenishing the reservoirs and greening a once desiccated landscape.

Finally, there was widespread relief. For the survivors, that is.

Another quieter, more persistent change crept across wide swathes of land both during and following the drought: over 100 million dead trees, killed by unprecedented heat and dryness.

Take the blue oak (Quercus douglasii), a drought tolerant tree common in the Sierra foothills and the Coast Ranges all across California.

“In some parts, particularly the southern parts of this range, and on the southern foothills of the Sierra, [blue oaks] actually suffered from pretty extensive mortality due to that major, major drought,” Leander Anderegg, an assistant professor in the UCSB Department of Ecology, Evolution and Marine Biology said in an interview with the Nexus.

In sites north of Santa Maria, for instance, 50% to 80% of the oaks on the landscape died.

“For a blue oak that can live hundreds of years, seeing 50% of them die off in three years is pretty concerning. And so this has raised the specter for all of us like, ‘Oh, how vulnerable are oaks to climate change?’ Is this the Ghost of Christmas Future that we’re seeing?”

Spurred by the mortality they were observing, Anderegg and his collaborators at UC Berkeley, the University of Quebec at Trois-Rivieres and the University of Bordeaux have since studied oaks across the west in North America, hoping to understand the resilience that the trees have to drought from the evolutionary and hydraulic perspective.

Trees that are exceptionally dry are often killed by embolisms, which are air bubbles that can accumulate in their vascular system — the water transport system of trees — when the trees become so drought-stressed that they suck up air, blocking the flow of the water that sustains them.

The researchers realized that prior research looking into the vulnerability of oaks to embolism in the lab setting had come to wildly different conclusions, some claiming that oaks were resilient to drought, others claiming that oaks were actually very vulnerable. By looking at several different lines of evidence, Anderegg and his collaborators are hoping they have brought the debate closer to some sort of consensus than before.

“It’s really hard to measure the hydraulics [of oaks], because they’ve got these really long vessels, and that makes them really, really difficult to deal with in the lab. The whole way water moves in plants is under tension and when you cut a branch you mess with the water that was under tension,” Anderegg said.

“If you have these open vessels, you can get all sorts of weird answers when you’re trying to make measurements in the lab.”

The researchers used a measurement technique, the optical vulnerability method, to visualize the time frame in which an oak’s xylem — the tissues in plants conducting water and nutrients throughout the vascular system — dry out and become filled with air.

They then tied this data to evolutionary and biogeographic lines of evidence.

First, they mapped their observed vulnerability to the evolutionary tree of the Western oaks and found that the most drought-resilient oaks were also all closely related evolutionarily. Then, the researchers asked themselves if these also aligned with the geographic distribution of the oaks they were studying.

This is good news, according to Anderegg, because across the board, oaks were actually fairly resilient to drought. However, a rapidly changing climate might prove an insurmountable challenge to oaks, if greenhouse gas emissions do not rapidly fall in the near future.

“Clearly, [oaks are] still vulnerable because we’ve seen them die off in big crowds. And, you know, an organism is sort of paired to the environment that it grows in, and it’s hard to say that something that is really good at dealing with drought is vulnerable or not vulnerable because that depends on where it grows,”Anderegg said.

“And in some senses, the drought plus fire connection is leading to [mortality] all over California. I think that the million dollar ecological question — or billion or trillion dollar ecological question — is: ‘How much torque can we put on California’s ecosystems before you start having type conversions and the vegetation of a place fundamentally changes?’”