In 2017, the Santa Barbara City Council adopted a 100% renewable energy goal for the city’s energy use. As part of this objective, the Energy & Climate Division, housed within the Sustainability and Resilience Department of Santa Barbara, is working to establish all-electric requirements for new construction in the county. 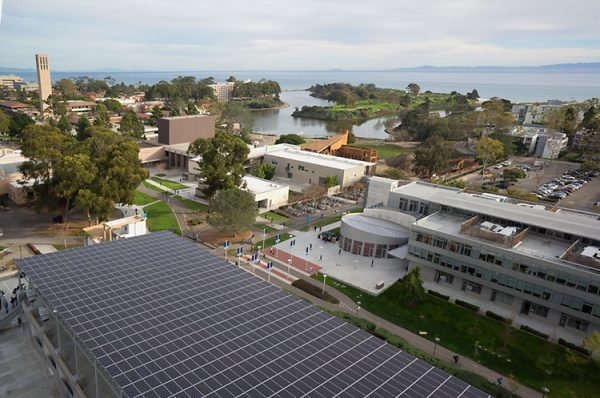 The University of California system has also committed to carbon neutrality. Courtesy of UCSB Sustainability

Alelia Parenteau, an energy and climate manager for the City of Santa Barbara, has served as the energy representative for the city and has worked for the past 10 years to create a detailed roadmap of strategies to meet the energy goal. Over the years, this has necessitated an expansion of her team to a designated Energy & Climate Division of the City of Santa Barbara.

This year, the focus of this division has been to implement all-electric requirements for new construction, as well as crafting guidelines and pathways for workers and staff to navigate said requirements.

According to a Council Agenda Report from Jan. 12 documenting the proposed energy code amendments for new buildings, energy use in buildings is the second-largest source of greenhouse gas emissions in California. According to Parenteau, lessening the carbon footprint of newer buildings offers opportunities to mitigate this and instrumentally improve energy efficiency and reliability.

The University of California system has also committed to carbon neutrality, and according to Parenteau, is positioned to provide the resources and innovation required to cut the cost of creating more sustainable sources of energy.

Currently, building electrification is the most cost-effective way to reduce carbon emissions. Mandating electric appliances such as electric heat pumps prove more efficient and safer than conventional natural gas methods of heating and space conditioning. In a study on residential building electrification in California, funded by the California Energy Commission, all-electric homes were estimated to “reduce annual [greenhouse gas emissions] by 33-56 percent in 2020 and 76-88 percent in 2050” compared to homes fueled by natural gas.

While there are encouraging advancements in making natural gases renewable, these methods remain cost-ineffective due to insufficient supplies to meet state or even county demands. With investment of time and money, renewable natural gas could prove as a tool in decarbonizing the natural gas industry. Until then, all-electric building regulation is currently the most viable and immediate solution.

Parenteau said that working to reduce greenhouse gas emissions at the local level as well as the federal level is just as, if not more important. As such, Santa Barbara has been a leader in efforts to take action against climate change.

“It’s easy to get stuck in the mindset that Santa Barbara is so small when, actually, we can create a lasting impact on a global scale,” Parenteau said. “The benefit of acting as a local government is that we can provide proof of concept by being bold and innovative. We can try out things that other governments or jurisdictions might not be as willing to try, and provide some understanding into how a program could work and what the costs and benefits could be.”

The council collaborates extensively with local governments such as the city of Goleta, Carpenteria and North County. Parenteau said these collaborations are essential to curtailing greenhouse gas emissions on a larger scale.

According to Parenteau, the Energy & Climate Division hopes to create a blooming effort in their region with their efforts, by inspiring neighboring counties to enact similar changes in building codes and new construction guidelines. As of January, 40 California jurisdictions sanctioned enhancements to building codes to either encourage or require all-electric buildings.

“Ultimately, as you get more cities taking that stance and making that happen, [we hope that] the state will recognize the movement and create statewide policy, ultimately showing the country that this is doable. California has always been at the bleeding edge of altering emissions and gas efficiency standards, and it’s local governments that keep it that way.”