The Daily Nexus
Opinion
Argument in the Office: Is “Attack on Titan” Worth the Hype?
March 18, 2021 at 9:00 am by Christine Tu and Hayson Tasher

“Attack on Titan” Is a Must-Watch. No Buts.

There are certain memories that remain in my long-term memory box: the day I got my dog, the first time I learned to ride a bike, among others, and of course, the day my brothers introduced me to the amazing show that is “Attack on Titan.”

Dare I say it? It might have been love at first sight. The character development, incredible world building and heart-tugging storytelling are just … *chefs kiss.* Honestly, there are no flaws.

From cinephiles to the most ardent movie haters, I think for the most part we can all agree that “Attack on Titan” is literally the best anime ever. If you’re not convinced, here’s why.

A main turn-off for most viewers can come in the form of Eren’s brashness, which stems from his hatred of the titans for killing — and eating, greek grape style — his mother. Also, his incompetence in the beginning of his training — especially when contrasted to his peers such as Mikasa, a childhood friend that effortlessly score perfect grades in every category — may seem irritating to viewers, especially given that as the main hero, Eren himself is supposed to be setting the standard for the rest of the cast. But in fact, Eren’s refreshing nature, and our negative reactions to it, show a divergence from the stereotypical nature of the superhero (Superman can fight crime, but can he find love?). Moreover, it demonstrates long-term thinking of the show’s plot: You’ve gotta start somewhere, and by having a character’s obvious — though grating — flaws crop up in the beginning, you provide room for growth.

The rest of the characters are perfectly crafted. Eren’s flaws are balanced out by the different natures of his friends and peers at the bootcamp where the young adults train to one day kill titans. Mikasa’s protective nature cements her as the main character’s sidekick while her flawless skills in titan-killing upend the particularly problematic stereotype of the damsel in distress. Armin’s lack of self-esteem balances out Eren’s overconfidence, and his growth into his self-awareness along with his loyalty to his friends make for great character growth.

The fact that I could watch “Attack on Titan,” almost 10 years after its release date and enjoy it like it was released yesterday lends to the expertise in which the timelessly enduring world setting was constructed. Set in a modestly vast civilization hidden behind three rings of walls to protect from the titans who have run over everything else, the world building is shown expertly through the lens of the various characters while exposing problems that provide parallels into our current society. For example, Jean’s reluctance to take on the dangerous role in the Survey Corps, instead wishing to leverage his good grades into a comfortable, yet exclusive, position as a guard in the protected city center, exposes the flaws in the societal system that prioritizes the wealthy, hidden in luxurious castles within the inner walls, while the poor are subjected to sudden and deadly titan invasions, enduring uncertainty of their safety. As the world is slowly revealed over the four seasons, its intricacy and richness continue to blow audiences away.

Not only are the characters perfectly constructed, but the plot is incredible as well. Right at the beginning in the pilot episode, “Attack on Titan” sets itself up for a “Game of Thrones”-worthy plot twist when Eren’s beloved mother gets devoured by a spine-chilling, creepily smiling titan and [spoiler!] in the middle of the first season when Eren himself becomes a titan — which is basically a twist on the same scale as when Ned Stark was beheaded at the end of season 1 of “GoT”). Mind blowing revelations aside, the most enduring and relatable aspects of the plot touch upon the themes that are brought up time and time again within the show: friendship, love and a desire to secure safety and a good future for loved ones. And, to cut through the highly strung emotions, interspersed throughout the show are moments of comedic relief, such as the girl who defied the fearsome command instructor by eating a potato during the first day of training.

Of course, there are always going to be haters, probably in the same category as those who hate ice cream and can’t stand puppies (jk, jk). And that’s okay! Also, given the grotesque violence of the titans, it’s definitely not for all audiences. But give it a try: binge watch it, or save the episodes for a rainy day. I can promise you, it’s worth watching. Or just read the spoilers; it’s better than not watching at all.

And in the words of Eren Jaeger: “I want to see and understand the world outside. I don’t want to die inside these walls without knowing what’s out there.” To those who still refuse to give “Attack on Titan” a chance, consider checking out what’s outside of those walls you’ve constructed for yourself. You might just find that you like it.

Christine Tu thinks that “Attack on Titan” is amazing and urges everyone and anyone to watch it. She struggles to understand: What’s not to like? 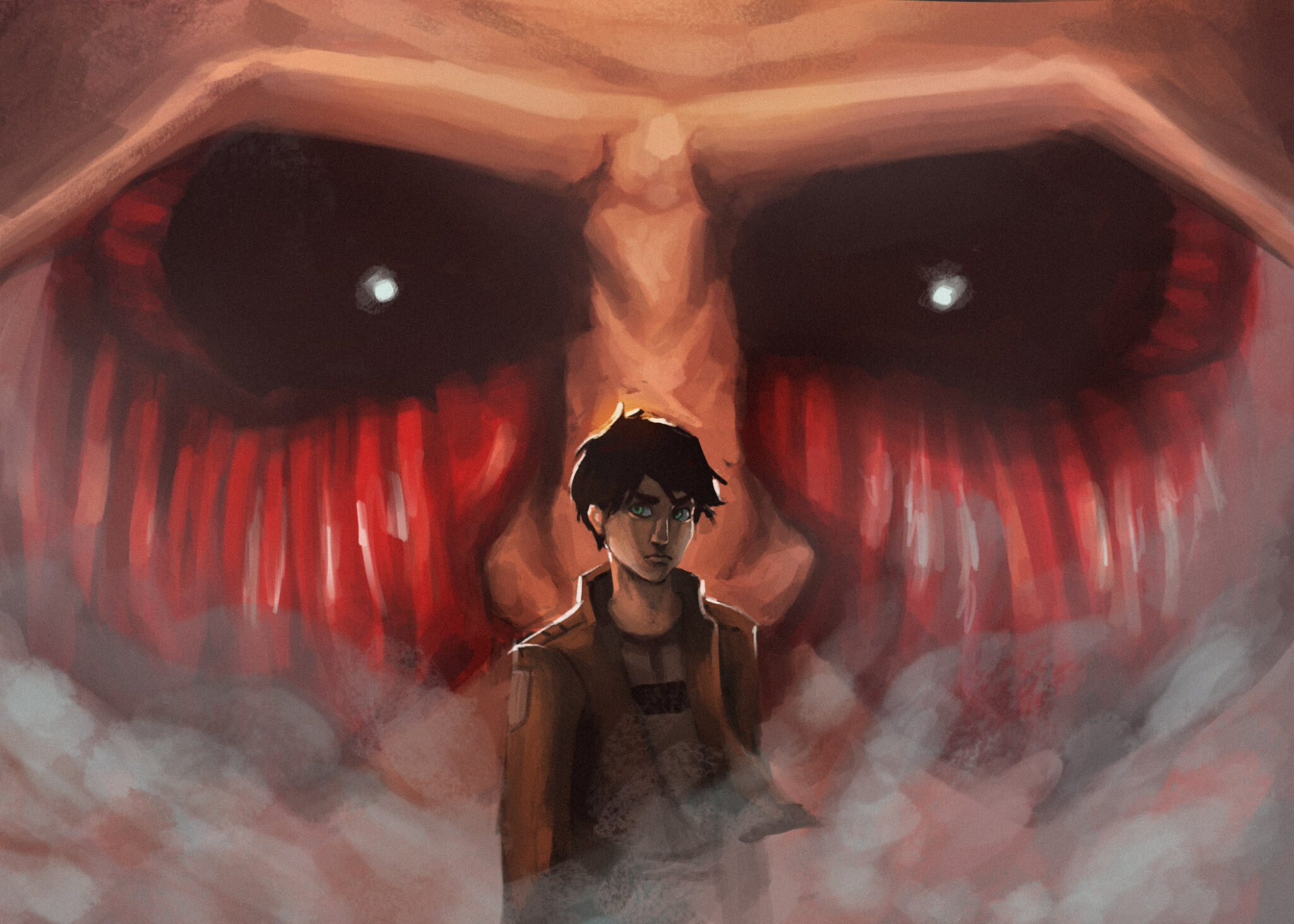 “Attack on Titan” Is Not Worth the Hype!

“Attack on Titan,” the anime whose recent season has taken the world by storm as of late, is about a world that is overcome by huge beasts who resemble tall grotesque humans called titans. Due to the world being overcome by titans, all of humanity has decided to live in different cities, which are built inside huge walls in order to protect themselves.

The anime begins when the city where Eren, the main character, lives gets attacked by titans. When the titans attacked, Eren’s mother was eaten and ever since then he’s harbored a never ending hatred towards the titans, giving him the desire to kill all of them. Eren is not the strongest in the show, but his drive to kill all of the titans and see the outside world with his adopted sister Mikasa and his close friend Armin prompts them to join the Survey Corps, the military that goes outside of the walls and protects humanity from the titans.

Even though there is action in the very first episode, Eren is just unbearable to watch. Eren seems like a very kind-hearted person who projects hatred towards one thing and one thing only: the titans. Eren’s character does change throughout the show, but very drastically and does not develop subtly in a way that allows the story to progress smoothly. In the show, Eren would repeatedly say something unsettling out of nowhere that goes against his character. It just seems way too forced.

The side characters, however, are very cool and have distinct personalities, but everyone who is not a part of the story literally gets treated like they have no worth whatsoever. There are so many deaths of civilians and other military members that it just seems way too unrealistic. The first time you see so many people die it is very emotional and it really touches your heart, but you quickly get desensitized from the titans killing so many people.

The side characters all have their moments of greatness, but there are a couple of betrayals in the story, and even though they keep the plot moving and deepen the story’s world, these traitors are extremely irrelevant until the betrayal happens. The betrayals happen suddenly and the characters are not interesting as their personalities do not allow for viewers to believe that they would actually betray someone.

I understand why Eren’s character changes throughout the show, especially considering the ongoing arc of the story, but it’s too drastic of a change to be realistic. The build up to the change of his character is hard to watch because he is constantly contradicting himself, crying and wondering why he cannot reach his goals. The world of “Attack on Titan” is very deep and full of mysteries, but the way the story is handled makes it hard for viewers to feel sympathy and understand characters’ motivations. Eren spends most of the story trying to figure out how he can make the world a better place. But as his character changes, he acts on his ideas much too suddenly and his actions cause him to seem irrational and without a clear goal.

Right now in the story, Eren embodies contradiction. Eren often does things that completely contradict what he is trying to achieve, making it very hard to follow his unclear motivations. It is unique and new to have a main character that becomes more of an antagonist as the story progresses, but the show ultimately fumbles in its portrayal of Eren.

The outrageous number deaths of many of the world’s background characters tries to make the audience feel sympathy for the world that Eren lives in, but instead it makes the audience become apathetic and unmoved by many of the other soldiers’ not-so-heroic deaths. Eren’s motivations and ideologies as a main character are different from most anime characters and deserve praise. But the show’s poor handling of character development hurts the story overall because it makes his character very unsettling and hard to watch.

Hayson Tasher thinks that… “Attack on Titan” is not that great of an anime. It does have it’s very good moments, but Eren is not written as well as everyone claims him to be.