The Daily Nexus
Sign of the Times
The Struggles of Applying to Law School During a Pandemic
March 9, 2021 at 9:00 am by Surya Swaroop 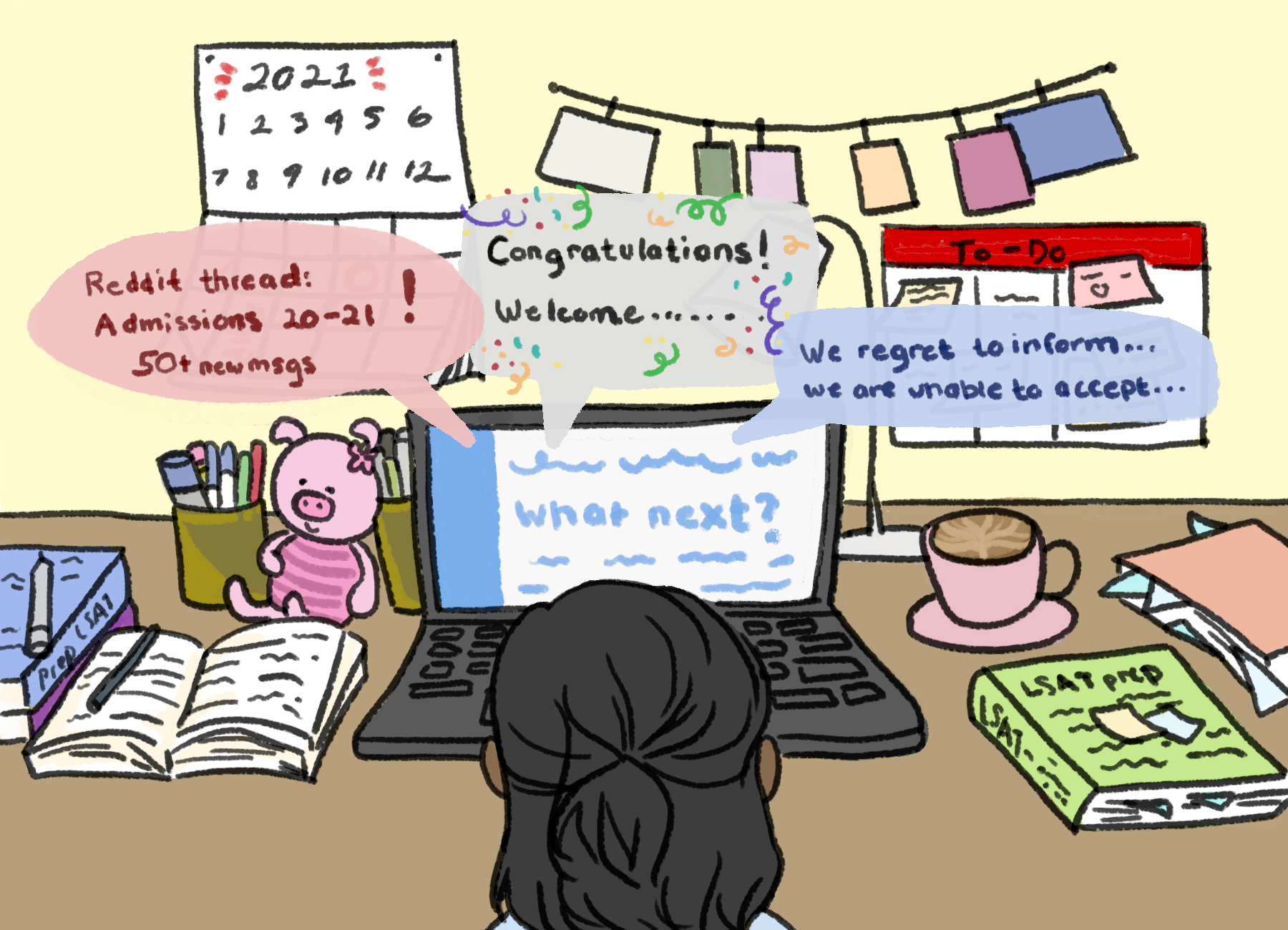 Like many other UCSB seniors, I am currently trying to figure out what my plans will be after graduation. Pre-pandemic, I knew that law school would be the ultimate goal, but I thought it would make sense to take a couple of years off from school and get some real-world experience first. Unfortunately, given the current state of the job market and my personal goals, I decided that it made more sense to up my timeline and pursue my J.D. immediately after graduation. Little did I know that countless others had the same idea and that the 2021 application cycle would shape up to be one of the most competitive cycles in years.

I spent all of last summer studying for the LSAT in the hopes that I would be able to score well enough to apply in the fall. One of the sad ironies of the new reality that COVID has imposed on us was that I didn’t have much else to do. After taking the test and receiving my results, I drafted a list of schools, prepped my personal statement and hit submit on all my applications while I hoped for the best.

Unfortunately, the optimism I felt at the beginning began to fade. I slowly learned that it is incredibly frustrating to remain patient, especially when there wasn’t much else to distract me from the process. COVID has resulted in a monotonous way of living for many of us and waiting to hear back from schools was no exception to this. I started a consistent routine of checking my email first thing in the morning, attempting to busy myself with school work, checking my email throughout the day and then feeling resigned when, more often than not, there was rarely any news.

One of the most toxic aspects of this experience has been constantly checking the subreddit for law school admissions and needlessly comparing myself to others. The first time I went on Reddit, it was out of a genuine interest to be around other people who were going through a similar experience. This quickly turned into learning a little bit too much about the obsession with rankings, the belief that certain schools were better than others for post-grad prospects and the way in which people would baselessly speculate about a process that no one had any real insight into. On some level, I understood this would in no way make the waiting game any easier, but I soon added “checking Reddit” to my daily list of activities.

I was receiving acceptances at schools that I was really excited about but, for some reason, the happiness I felt after hearing such news was fleeting.

I tried not to let my emotions cloud my judgment but this proved to be difficult as the weeks of waiting turned into months of waiting. I tried to rationalize this as yet another consequence that COVID has had on people’s lives, but this provided little comfort. It got to the point where I became frustrated with myself for even getting frustrated. I was receiving acceptances at schools that I was really excited about but, for some reason, the happiness I felt after hearing such news was fleeting. I started to realize that my transient reaction boiled down to two main causes.

First, the ranking system does far more harm than good. While there is somewhat of a basis behind which schools are considered to be in higher tiers than others, at a certain point this loses some value. I would find myself going into a panic spiral because I got into a school that was ranked 20 in the nation but hadn’t heard from a school that was ranked 18. When I tried explaining this to people, they looked at me like I was making absolutely no sense. And, quite honestly, I wasn’t. I was letting the posters on Reddit, who were by no means more knowledgeable than me, get into my head. I know that wherever I end up, I’ll be able to do well and have the career I want to have. I knew that going into this cycle but, along the way, I let my insecurities and self-doubt get the better of me and allowed myself to be swayed by the convoluted logic of an anonymous internet community and the arbitrariness of a U.S. News & World Report ranking list.

Another reason to which I attributed my fluctuating moods was the unfortunate new reality we have all had to adapt to. It was difficult for me to sustain a level of excitement about hearing back from schools because my overall mood had been dulled by months and months of life being exactly the same. It was hard to start planning for a future when I wasn’t sure how feasible it would be to potentially move across the country, and I certainly wasn’t looking forward to the possibility of yet another semester of online classes.

We’re all going through variants of the same experience in terms of not knowing when a definite end to this pandemic will be. It’s easy to become numb to anything that happens in life simply because this is lasting a lot longer than any of us initially thought. I’m definitely still a work in progress in terms of learning how to cope, but I am trying harder to not let the reality of the present interfere with the possibility of my future. This application process has been nothing like I thought it would be, but that doesn’t change the fact that, in about three years, I will be a lawyer. I often lose sight of that fact because it doesn’t feel tangible, but I’m starting to realize that I need to hold onto it because, amidst all the uncertainties, that is something that I know is true.

Surya Swaroop believes it’s ok to feel frustrated by uncertainty but it’s also important to acknowledge the positives in life.

Thank you so much for writing this article, I also applied to law schools during this pandemic cycle and related so hard to the struggles of self doubt but never really took the time to fully process what and why I was feeling the things that I did; like constantly checking my email to only find spam mail, and initially checking reddit to not feel alone in the waiting process slowly started feeding into feelings of inadequacy and not being to go outside and have a normal social life didn’t help either. I constantly went through cycles of believing in… Read more »