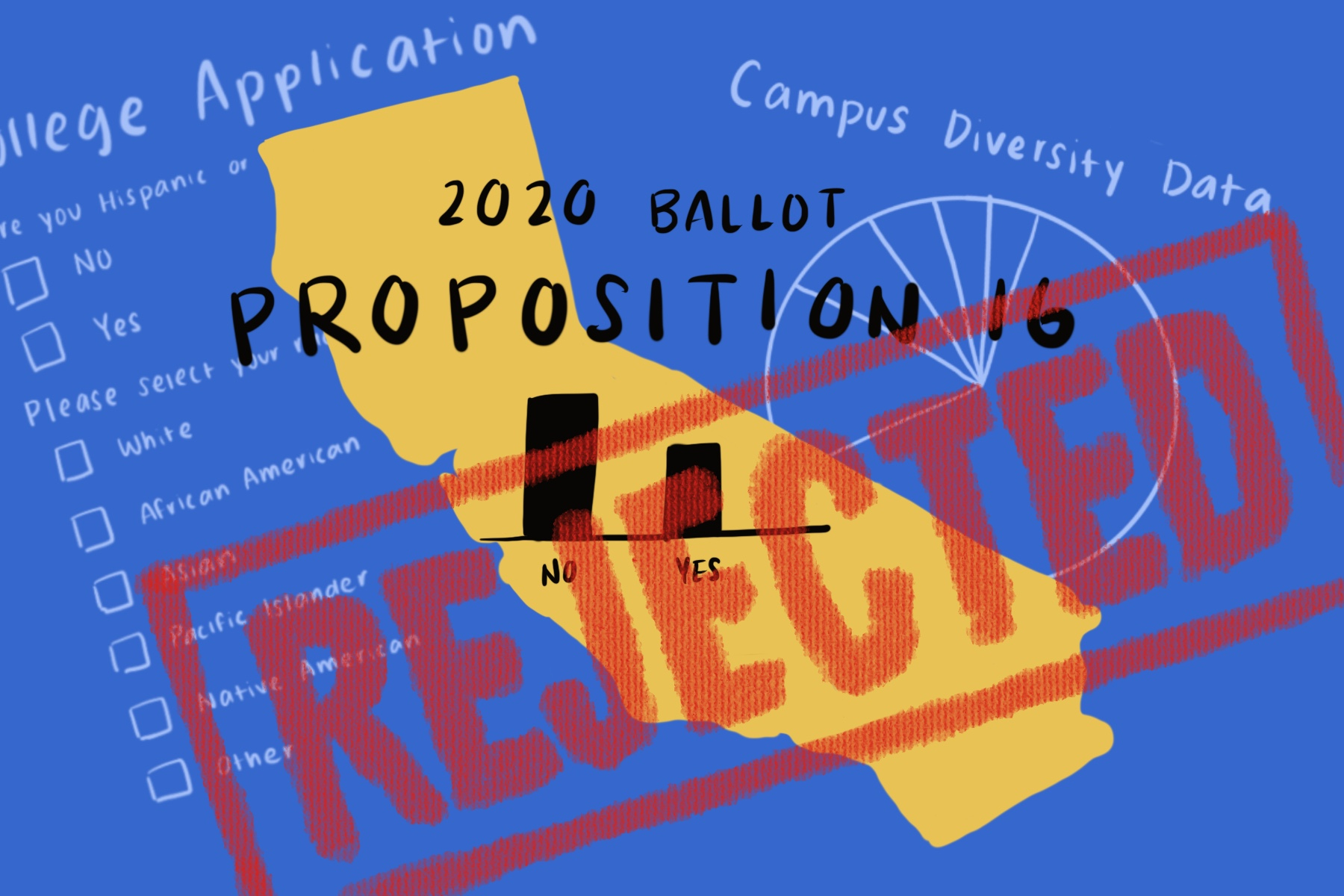 During the 2020 election, California rejected Proposition 16, a proposition that would reinstate previously banned affirmative action based on factors like race, sex and national origin. This proposition failed by a huge margin despite the disproportionate funding effort to support Prop. 16 and the support of the Democratic party demonstrated by various endorsements from prominent state and federal elected officials in California including Governor Gavin Newsom and Vice President Kamala Harris.

Affirmative action (AA), is the practice that public institutions voluntarily adopt to consider factors such as race and sex in their employment or admission practices to counter-balance historical racism by offering special consideration to members that were historically disenfranchised. In the context of college admissions, AA works to increase the representation of these groups at universities. The key here is not an equal opportunity, but a special opportunity for certain racial or ethnic groups.

Many colleges and universities adopted affirmative action in the ‘60s by setting quotas for certain groups of students. The aim was to increase the enrollment rate of minorities in colleges that were almost exclusively white before desegregation and the civil rights movement.

However, the practice of leaving set-asides and quotas were struck down by the Supreme Court in the landmark case, UC Davis v. Bakke. The first of its kind regarding affirmative action, this case acts as a standing precedent for others in modern times. In the opinion, Justice Lewis F. Powell reasoned that any quotas of race were unconstitutional under the 14th Amendment’s Equal Protection Clause and a violation of Section VI of the Civil Rights Act. This ruling effectively banned the practice of having racial quotas in all major universities, private or public.

However, the court further reasoned that a consideration of race in college admissions is allowed as long as it passes a strict scrutiny test. Therefore, this allowed affirmative action to be utilized as long as there was a “compelling governmental interest.”

But what exactly is that “compelling governmental interest?” Many might think it is to mitigate our long history of racial discrimination or lingering societal racism, but the court explicitly struck down those defenses for the use of affirmative action.

According to Bakke, past discrimination or current “societal discrimiantion” does not justify giving preference to certain groups. The new, viable justification provided by the court for affirmative action is to allow it only in the interest of cultivating a diverse student body

The biggest blow of this decision on affirmative action was that it took away its best and perhaps most accurate justification as a necessary step to mitigate past and current discrimination. The reason that people of color (POC) deserve a better opportunity for education is because many generations of POC were explicitly denied the opportunity to educate themselves by the government. But once that reason was taken away, higher education was left to navigate a much weaker, much more ambiguous goal of diversity.

The word doesn’t explain itself either. Questions like: “Who gets to decide the right ratio of diversity out of the expense of the taxpayer?”, “I’m a tax-paying citizen who pays the same amount of taxes as my fellow non-white citizens, why shouldn’t I or my kids get the same access to public help and resources if past and current racism is taken out of the equation?” and “Why does the skin color of the students matter if it is not for mediating past discrimination?” were never really answered by the court or government.

But affirmative action failed, even in liberal California. This could very much send a signal to the conservative justices and judges on the Supreme Court that it is time to finish the job while the public is on their side.

Moreover, with diversity as the only objective, some POC like Asian Americans who have systematically suffered and continue to suffer from racism are harmed by affirmative action more than Caucasian Americans since they overrepresent in elite universities due to on average higher SAT scores and GPAs. It doesn’t paint a pretty picture when universities — in which faculty members are disproportionately white — and politicians — also disproportionately white — get to pick which minority groups to give extra help and which minority groups to hold to a higher standard than the average white American. All those factors considered, the Bakke decision made AA seems like less of an opportunity to raise people up from past harms than a scheme of race pandering to further divide Americans.

In the most recent case regarding AA, Fisher v. University of Texas, the Supreme Court hit affirmative action with another major blow. This decision stated that schools have to not only explain why they want a diverse student body, but they have to prove that using racial preference is the only way that they can achieve it.

This is a harsh standard because this would prohibit many schools like UC Santa Barbara, which already has a racially diverse student body with race neutral standards, from the option of using affirmative action.

But affirmative action failed, even in liberal California. This could very much send a signal to the conservative justices and judges on the Supreme Court that it is time to finish the job while the public is on their side. The conservatives on the court are all aligned on this issue. John Roberts, the usual swing vote, voted to reduce the power of affirmative action in every major case and famously said: “The way to stop discrimination on the basis of race is to stop discriminating on the basis of race.”

The liberal bloc of the Supreme Court might also weaken their support for affirmative action. For example, Justice Stephen Breyer has already demonstrated his reservations about AA in a discussion with the late Justice Antonin Scalia. Justice Breyer is someone who believes that the will of the people should influence the court’s interpretation of the constitution. The failure of Prop. 16 could lead Justice Breyer to believe that the people’s view on race and education has changed and race should no longer play a role in diversifying the campuses.

To top it all off, there are a slew of cases heading to the Supreme Court in regards to affirmative action. Students for Fair Admissions v. Harvard challenges that Harvard University illegally used their “personal quality” evaluation to discriminate against Asian American applicants, therefore violating section VI . The Justice Department is also suing Yale University for similar violations. Given the conservative super-majority in the Supreme Court and a weakening opposition, the court could very likely see these cases as cause to reinterpret the 14th Amendment to ban racial consideration in public entities; as well as Section VI in government-subsidized private organizations, which include elite universities like Harvard and Yale, to explicitly outlaw any race-conscious programs.

They could also, just like Justice Clarence Thomas wrote in Fisher, overturn part of Davis and no longer consider a diverse student body as a “compelling governmental interest.” If that is the route that the Supreme Court takes, it would effectively end any affirmative action programs in America. The reach will be incredibly large. No school will be allowed to have any diversity programs, inclusion programs or programs delegated for female and minority students. Instead, all programs would be accessible by all students, presumably with exceptions for income and disability.

Would such a change ultimately be good or bad? I’ll let you be the judge. But this failed proposition surely shows a change in the attitude of Americans toward racial conscious admission in higher education. A whopping 73% of Americans already don’t want race to be considered. And conservatives on the courts now have the best chance in decades to get it done.

Nathan Lee invites a discussion on race and higher education.

The reason 73% of Americans don’t want race to be considered is because it is common sense. There are no “people of color (POC)”, as the article titles them, who are denied the opportunity for higher education. When was the last generation that was denied by the government to educate themselves?? Race should never have anything to do with admissions. If the role of higher education is to prepare individuals for the work force, then the most qualified individuals should be the ones who are selected for admission. This sentiment is spread across all applicants, you shouldn’t get special consideration… Read more »