The Daily Nexus
UC News
“Who Guards the Guards:” UC Black Staff and Faculty Organization Discuss the Past, Present and Future of Law Enforcement in Police Panel
February 28, 2021 at 7:16 pm by Sindhu Ananthavel

Academic and law enforcement experts discussed the difficult history of law enforcement in the United States and what a future without it might look like in “Defund the Police: Reimagining Public Safety,” a University of California discussion held on Feb. 17. 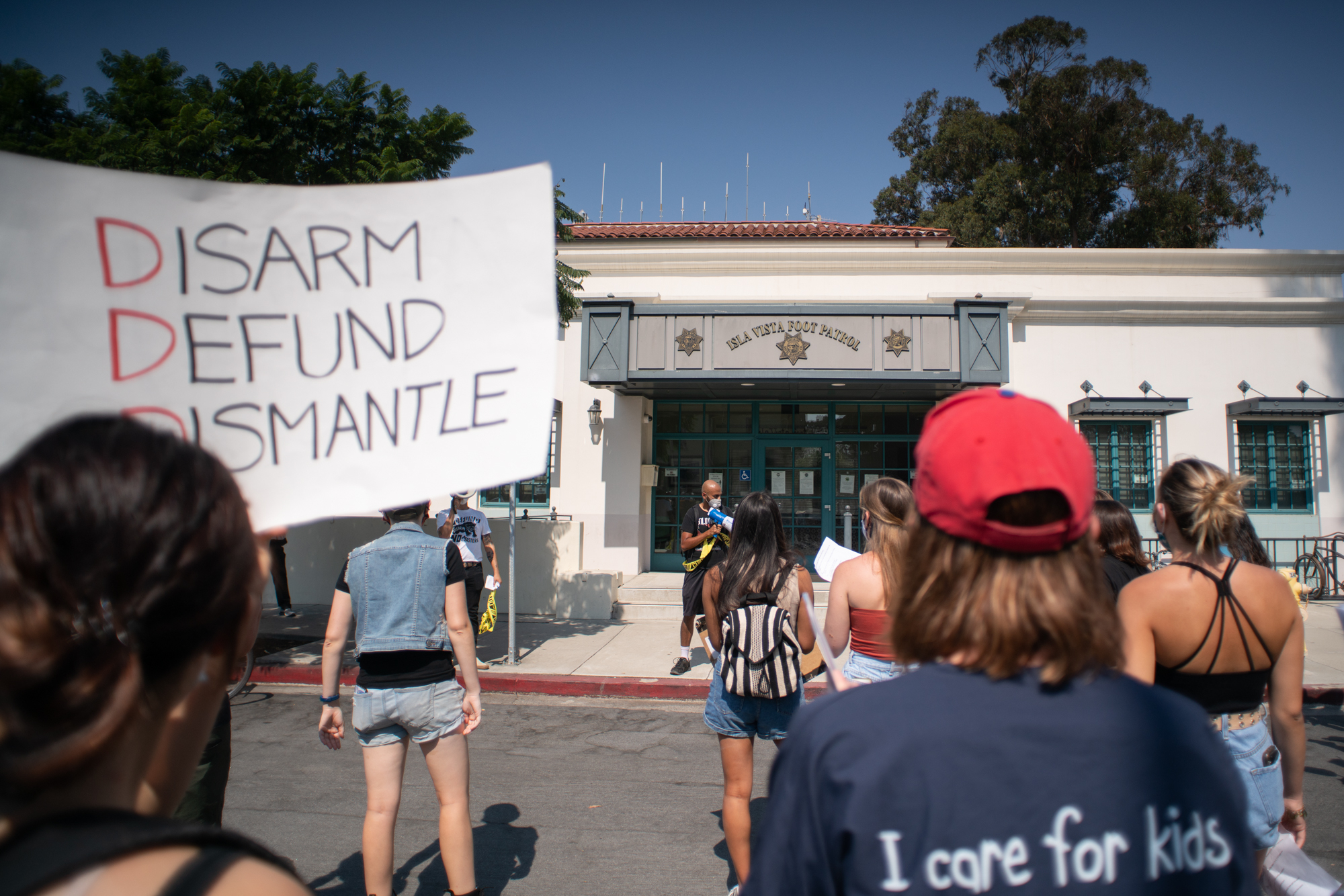 In the aftermath of the police killing of George Floyd last summer, the discussion around police brutality and violence against Black Americans has centered around defunding and abolition, Gibbs said before the discussion. Sicheng Wang / Daily Nexus

Organized by the Black Staff and Faculty Organization (BSFO), the discussion was a part of the UC-wide Black History Month virtual event series and was moderated by Geoffrey Gibbs, of the UC Legal Office of Special Counsel, and included Nikki Jones, a professor of African-American studies at UC Berkeley, Jennifer Cobbina, a professor at Michigan State University’s School of Criminal Justice and Major David Hughes, a former Virginia policeman known for his New York Times op-ed piece on police reform published last year.

In the aftermath of the police killing of George Floyd last summer, the discussion around police brutality and violence against Black Americans has centered around defunding and abolition, Gibbs said before the discussion.

“[We’re asking] a question people have been asking ever since human beings organized themselves in cities and gave certain other human beings the right to take them into custody and to deprive their individual liberty, and that question is ‘who guards the guards?’” Gibbs said.

Jones gave a brief history of law enforcement in the U.S. to open the discussion, highlighting its roots in slavery before the official establishment of police departments.

“There was a web of surveillance that existed to control Black people … you had slave patrols and slave catchers, and both of these forces influence the rise of policing in the West,” Jones said. “In order to understand how policing maintains that relationship to policing Black people and Black freedom, you have to understand that history.”

That historical relationship between white supremacy and policing extends to the present, a recent example being the storming of the Capitol by insurrectionists last month, Cobbina told the panel, adding that she was unsurprised that white law enforcement were complicit in the act.

“I know many were surprised to see law enforcement officials involved in the storming of the Capitol, but the reality is these concerns are not really new. As Jones stated, American policing rooted is rooted white supremacy,” Cobbina said. “So now police departments have become really attractive breeding grounds for white supremacist groups.”

As a former police officer, — now a Professional Standards Bureau Chief at the Newport News Sheriff’s Office in Virginia — Hughes’ perspective on the panel was different from the professors who study policing. He spoke about the racism he faced as a Black man within his police department in Norfolk, Virginia. He criticized racism in policing and called for reform in his July 2020 New York Times op-ed.

“I remember a sergeant who told me that Black folks should not be police officers, and that it was like letting ‘the fox guard the henhouse,’” Hughes said. “So when I saw [former] Homeland Security Chief Chad Wolf make a comment on television saying there was no racism in law enforcement in this country, I disagreed strongly with that, because I lived it. I just felt I had to say something.”

In contrast to other panelists, Hughes expressed doubt over the concept of defunding the police and what it would accomplish, voicing worries that taking away money from police departments would result in “the wrong people” being hired.

“The biggest expense is personnel costs. So when you take money from the police department, you are affecting the people that you are hiring, and if you can’t make the job attractive to people who want to come in and do the right thing, you will get people who do not necessarily have the right motivation to work in public safety,” Hughes said.

In response to Hughes’s concerns, Cobbina clarified the intention of defunding the police: to reallocate those funds to other social services rather than simply deprive police of funding. She referenced data from Urban Institute showing a large increase in police funding in state and local governments — from $42 billion in 1997 to $115 billion in 2017 — and said that the increase has not resulted in better policing.

“When there are calls to defund the police, that is referring to reallocating funds traditionally allocated for police to social service agencies such as education, healthcare, housing, employment opportunities, youth services and community resources because these areas are typically underfunded, especially in marginalized communities,” Cobbina said.

The panel also focused on the use of words like ‘defund’ and ‘abolition’ in relation to the police and how those words might incite fearful reactions.

“I think one of the things that really scares people [about abolishing the police] is they think it is only about tearing down, and certainly for some it is, but a number of others will say it’s not just about destruction — it is about building up life-affirming institutions,” Jones said.

Gibbs then asked the panelists who would be better suited to deal with a situation where someone mentally unwell posed a threat to themselves or others, a policeman or a social worker. Cobbina gave Advance Peace, a non-profit organization dedicated to ending cyclical gun violence in American urban neighborhoods, as an example of a community-based organization that works to reduce gun-violence and improve mental health resources within marginalized communities and has displayed success in dealing with situations like the one Gibbs described.

“What [Advance Peace] focuses on is building trust and relationships with people who are at the center of urban gun violence, and they recognize the trauma that many have experienced and understand that it can contribute to their use of violence. There have been outcome evaluations of their programs in Richmond and Stockton that show positive results,” Cobbina said, referencing the 40% decrease in homicides in Stockton, California since Advance Peace’s inception. Jones echoed Cobbina’s praise of the organization.

One problem brought up by the panel is the trend of police officers living outside of the communities they serve, be it because of financial restrictions or other reasons.

Questions were then taken from the audience to close off the panel. One audience member asked if the police could successfully be abolished altogether within a community, and Cobbina restated her stance on needing to reallocate funds and support social services to truly move toward abolition.

Jones said that the emergence of community-derived support and a resulting lack of reliance on law enforcement was notable, and an indicator of progress.

“We have to think about resources outside of policing that can provide safety and support to people in crisis,” she said.

Jones closed the event by discussing the importance of supporting community-based social services and noted the recent rise in community organizing.

“What we are seeing in this moment is the rise of mutual aid organizations,” Jones said. “We’re seeing communities for a number of different reasons banding together to provide the kinds of services that the government’s not providing, and not waiting right for the government to get their act together.”

ah yes the protest in front of the wrong police station. “de-fund the police” equals softball for “law and order” campaign equals loss of seats in house, a tie in the senate, and 72 million voting for Trump. no blue wave and four more years of rancor. find a new way to frame this. per Biden: “we are not de-funding the police.”

Ya’ll know that the cops in your area stopped an active shooter right?