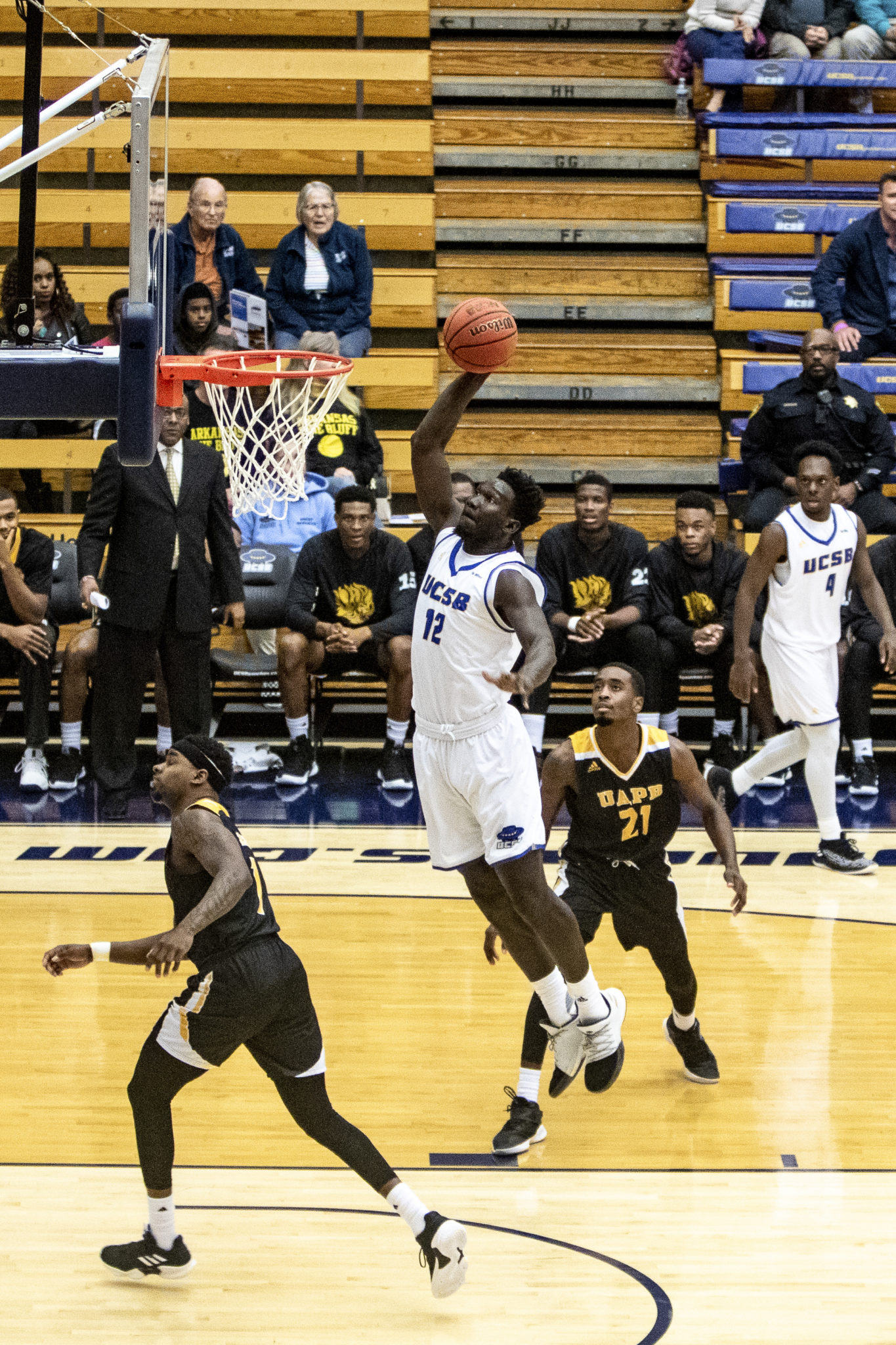 With their back-to-back wins against the Cal State Bakersfield Roadrunners this weekend, the UC Santa Barbara men’s basketball team has made history by breaking the school’s all-time win streak with their current 12-0 game run. The Friday game was shaping up to be a quality win, but a late rally by the Roadrunners made for a scrappy last five minutes in which the Gauchos still managed to secure a 71-66 win. On Saturday, however, the Gauchos gained enough momentum to execute a 63-44 rout of the Runners. Going into this week, the Gauchos have a conference record of 10-2 and are currently the prohibited favorites to hold onto the top seed spot for the Big West Conference championship tournament in March.

The Gaucho’s leading scorer, senior guard JaQuori McLaughlin, also had a historic weekend; on Friday, he became the third Gaucho to ever score a total of 1,000 points while also having 300 assists. Junior forward Miles Norris also had an exceptional weekend, scoring a personal career-high 27 points on 81.8% shooting from the field and 80% from deep in the Saturday rematch against Bakersfield, leading the team to its decisive victory.

Friday’s game was initially a very even defensive matchup, with both teams letting it fly from midrange and beyond; however, with Santa Barbara outshooting Bakersfield in the first half by 48.3% to 44.4% from the field and 40% to 28.6% from behind the arc, the Gauchos were able to build a 14-point lead in the first half, which would eventually be cut to 10 by halftime. Things got worse for the Runners when their forward Shawn Stith took a hard fall in the paint, sidelining their best paint finisher and impacting the rhythm of their offense.

The second half saw Santa Barbara build their largest lead yet of 19, but that soon fell apart when the motivated Runners squad started a comeback push late in the game as the Gauchos got sloppy. Starting with a clutch jumper by substitute Grehlon Easter with 3:33 left in the game, the Runners went on a 7-0 run to make it a two possession game with half a minute left at 63-67. With 13 seconds left, Easter made a crunch-time 3 to make the score 66-69, but an intentional foul on McLaughlin let the veteran Gaucho ice the game by making two free throws with 7 seconds left to hold onto the win. Overall, it was the depth of the Roadrunners that made for a close game, with their bench scoring a staggering 40 points compared to Santa Barbara’s 16.

Saturday’s matchup proved to be much less close, with the Gauchos’ offense starting the game on a 7-0 run and holding the lead for the entire game. It was not just a scoring exhibition, however, as Santa Barbara’s defense put the clamps on Bakersfield, holding the Roadrunners to single digits until there was 8:32 left in the first half. It was earlier in the first half that Norris started his personal-best scoring rampage by draining a jumper from behind the arc, kicking off an 18-point half for the junior who, by the end of the night, was also the top scorer of the game by a margin of 18.

The latter half of Saturday’s competition started with a score of 39-21 in Santa Barbara’s favor. While Norris continued his offensive crusade, the Gauchos also exhibited their team’s shooting abilities, netting 15 points from downtown on 50% shooting. It was with 6:20 left in the game that Josh Pierre-Louis would drain a 3-pointer to acquire the team’s largest lead of the game: 24 points. This would also be the last bucket for the Gauchos, but they wouldn’t need another as the ‘Chos held on for a 63-44 victory.

The Gauchos now have a commanding lead in the Big West and will face off against the Highlanders of UC Riverside in an away series this Friday and Saturday. As the Gauchos look to expand their already historic win streak and defend their lead at the top of the Big West standings, this weekend is sure to bring some exhilarating basketball.