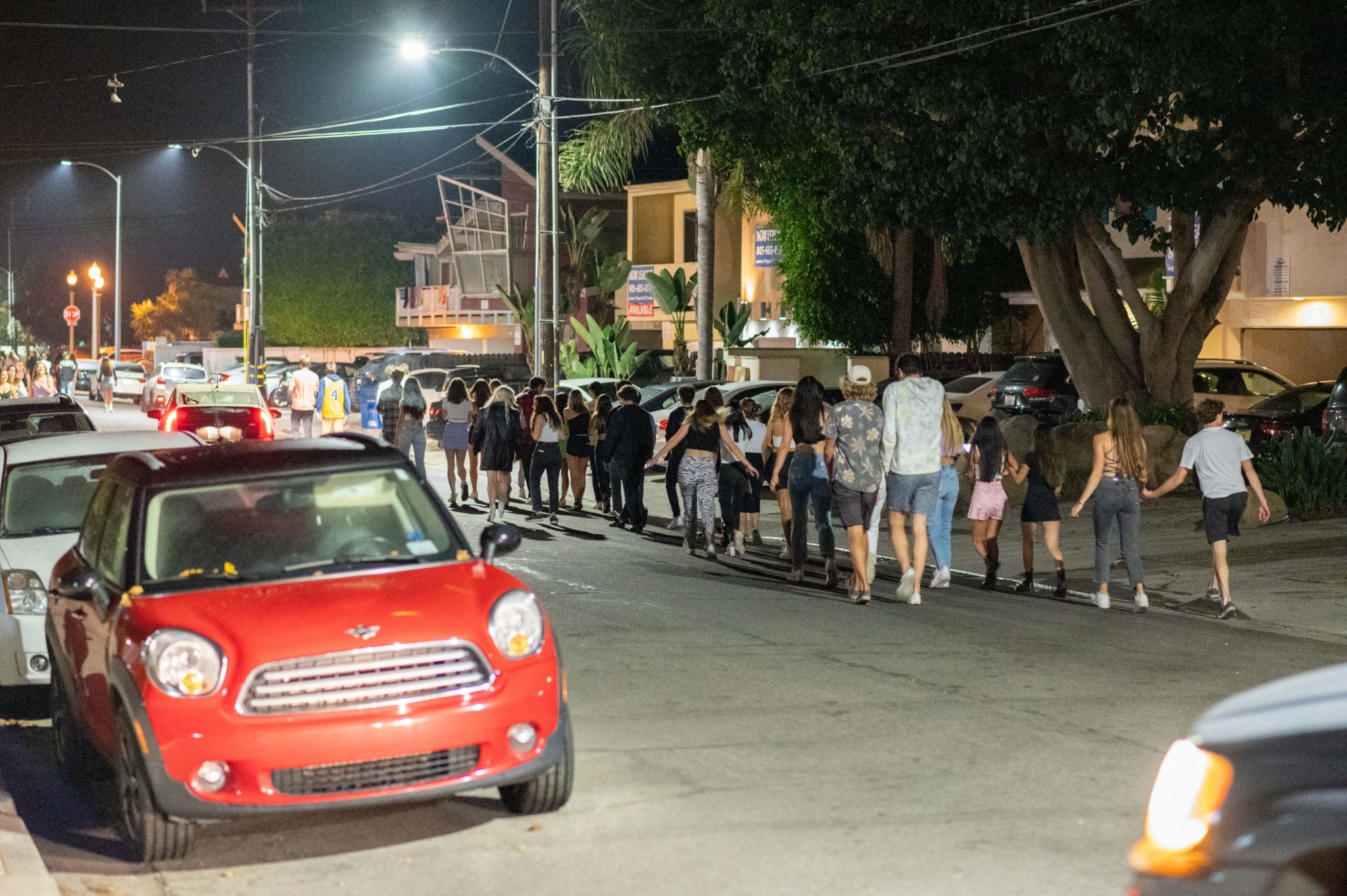 On Jan. 29, UCSB sent a campus-wide email to students that laid out the academic consequences of violating public health orders and stressed the importance of taking safety precautions, such as wearing masks and social distancing. As of the end of January, over 150 letters for alleged violations have been delivered to residences of UCSB students, with 100 individual contacts made by administration with identified students and less than 20 referrals of individuals and organizations to the Office of Student Conduct, according to the administration’s email.

“UCSB students are contacted individually by the associate dean in the Office of Student Life, and when violations involve SBCC students reports are forwarded to the appropriate entities there,” UCSB spokesperson Andrea Estrada said in a statement to the Nexus.

“Other actions involve warnings and sanctions against registered campus organizations, sending students through the formal conduct process when appropriate, and working with property owners when there are allegations of lease violations.”

UCSB Party — a project run by an anonymous UCSB student that began as a website for a class assignment — posts video evidence of large parties in Isla Vista on its Instagram, Twitter and Facebook accounts. The account’s owner, who spoke to the Nexus on the condition of anonymity citing privacy concerns, doubts that UCSB and the county’s public health guidelines are being strictly enforced.

“I feel like students definitely get the sign from the police and the school that it is okay to keep partying,” the account owner said. “Even if there was just an example of a few students being suspended, they might think twice.”

“I don’t feel like anything more will happen. It stopped with the ordinance of the fines being implemented,” the account owner continued, referring to the enforcement of the ordinance passed by the Santa Barbara County Board of Supervisors in October that established fines for residents in violation of public health guidelines, including a ban on large gatherings.

Gauchos 4 Transparency (G4T), a student organization that pushes for accountability and transparency from officials at UCSB and in I.V., has worked virtually both to get the ordinance passed and provide information on social media about COVID-19 related news.

“It has been a bit difficult to make sure [the ordinance] is being implemented because it is out of our hands,” G4T founder and third-year communication and economics double major Izzy Mitchell said. “I think the process in place — if they continue to successfully identify students and follow up with that — is fine. It is more of the issue of ensuring that these students are being followed up [with] and not just sent a single email.”

Third-year communication major Yu Ishii created a petition calling on the university to take firm action against non-compliant students, which has garnered over 2,000 signatures since Jan. 24.

“I think the people [in the UCSB administration] who are trying to reinforce restrictions are very out of touch with what is going on in Isla Vista,” Ishii said. “Tens of people go to these parties. They can easily split a $100 fine. One hundred bucks is probably less than how much they are spending on alcohol for these parties.”

The order violation fines issued by local peace officers and public health officials range from $100 to $500, according to Kelly Hubbard, director of Santa Barbara County’s Office of Emergency Management.

Universities across the nation have made headlines for enforcing social distancing guidelines among their student population, such as Ohio State University announcing the suspension of over 200 students for off-campus partying before the first week of fall classes and Northeastern University similarly dismissing 11 students from campus without full-tuition refunds, NPR reported.

“I’m just a student who wants the partying to stop,” Ishii said. “I don’t think I should have to come up with a whole plan of how to reinforce these things. But I think following suit from other universities is a good place to start.”

Within the UC system, schools that have welcomed students back to campus adhere to strict guidelines to meet a sufficient level of safety. Students at UC Berkeley are currently self-sequestering on-campus, with police officers walking the hallways to enforce the mandate, according to SF Gate.

UCSB students who are living in the campus apartments or working on campus must complete daily symptom screenings, take weekly asymptomatic screening tests and follow the no-guest policy, among other guidelines, according to Estrada.

Eight out of the nine UC campuses received “A” or “B” grades from a data-reporting Yale rating system on their COVID-19 dashboards to relay daily test results and local statistics. UCSB received an “F” due to the lack of an applicable dashboard, although there is one in place for violation response.

The UCSB Student Code of Conduct details the jurisdiction administration has over off-campus student behaviors, including Section 102.08, which cites university authority over any behavior that threatens the health or safety of any person.

Currently, I.V. has 30 active cases, but it has confirmed 1,219 COVID-19 cases and one death to date, according to the Santa Barbara County Public Health Department website. More than 150 Santa Barbara County residents with COVID-19 died in January, making it the highest monthly death toll since the pandemic began.

“You would hope that people would have common sense and courtesy to have a little regard for other people’s lives and safety, but I guess that is what comes with being a top 10 party school,” Ishii said.

Why isn’t the IV Community Services District addressing this problem? Residents are paying for an expensive staff and director’s fees for what?–nothing. Students are having to create their own governance when this idiotic and expensive “services district” is paid to do nothing. UCSB’s head in the sand approach is reprehensible. Hopefully belt tightening after the pandemic leads to the removal of worthless vice chancellors and assistant deans.

The administration’s unwillingness to hold UCSB students accountable for their actions during a once in a century pandemic is unforgivable. Similarly, the UCSB students who are choosing to party in this time of such great suffering is not only acting insensitively toward those students who are unable or are choosing not to be near campus, but is causing measurable harm to those within and without the community. I would hope that these students would simply elect to stop partying so that everyone can return to IV and campus sooner rather than later, but since they have demonstrated a total inability… Read more »

As I read your insightful comment there is a large crowd of maskless people gathered in the street outside my home. UCSB and SBCC are not holding their students accountable. UCSB’s numerous “deans and assistant deans of students” need to be fired. UCSB is overstaffed with do-nothing administrators who dropped the pandemic ball long ago.

Student groups are independently addressing public parties while Ethan Bertrand of the CSD is forming a party committee? What is wrong with this picture? Someone is on the wrong page.