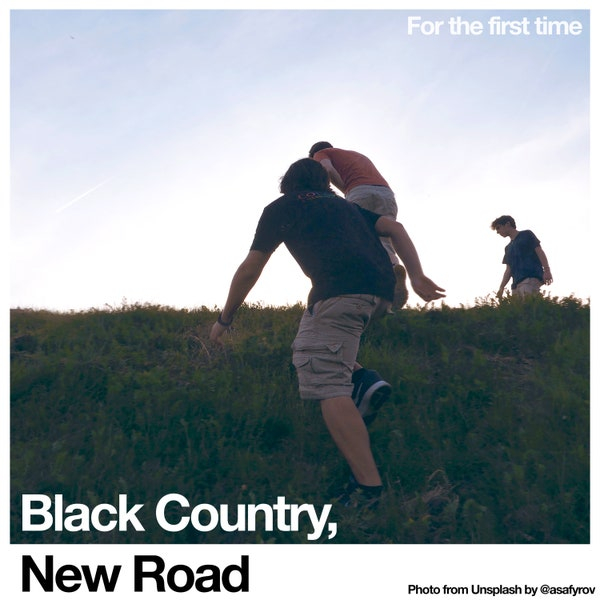 Black Country, New Road was born out of the ashes of predecessor band Nervous Condition, and with only a few singles under their belt, the London-based rock septet released their much anticipated debut album, “For the first time,” earlier this month.

Rising out of the famous Windmill Brixton music venue with other post-punk acts like Black Midi (both bands have even joined forces at one point under the moniker Black Midi, New Road) and Squid, the band has established itself as one of the most exciting new British exports, frequently drawing comparisons to the American post-hardcore band Slint.

Black Country, New Road (BCNR)’s sound is hard to pin down. Most of their songs have no tangible patterns to hold onto, which makes the songs on the record a study in tension building and release.

The album opens with the sounds of drummer Charlie Wayne’s bombastic and throbbing drum style on “Instrumental,” which are soon joined by bassist Tyler Hyde’s pulsating bass line. While both Wayne and Hyde hold down the groove of the track, keyboardist May Kershaw lays down a melody that seems almost out of place for the song, even only some 40 seconds into it.

The second track on the album, “Athens, France,” was originally released as the band’s debut single in 2019, and has since been reworked and refined for the project. The album version of the track is polished and less tinged with desperation and paranoia, opening with bass and guitars vying for center stage as Wayne’s off-kilter drums kick in. Lead singer Isaac Wood croons his lyrics, reminiscing on a tumultuous relationship. The song builds up before saxophonist Lewis Evans comes in, and the song becomes more subdued as Woods continues to sing amidst the mellow saxophone sound.

If there is one track on this album that highlights the best of Black Country, New Road, “Science Fair” is it. The song opens with what can only be described as feedback of some sort before Hyde and Wayne jump into the mix, immediately followed by Luke Marks’ Thurston Moore-esque inspired, distorted guitar playing. The lyrics tell a story of a science fair experience gone wrong, as Evan’s free jazz-influenced playing goes in tandem with that of violinist Georgia Ellery, growing in intensity until the tension can no longer be contained.

Clocking in at nearly 10 minutes, “Sunglasses” is the longest track on the album. Originally released as a single in 2019, the drums are subdued and less frenetic on the song as the guitar playing is melodic and free of distortion. On this track, however, Wood belts out lyrics that act as a sort of argument between the singer and the object of his frustrations. While the guitar, bass and drums remain subdued, the saxophone playing becomes more unhinged and reminiscent of screaming. Wood’s lyrics also become more absurd: “She sells chemtrails/To the students at Bedales.”

The second to last track, “Track X,” is a respite from the tension and franticness of the previous four tracks. Tonally one of the most melancholy songs on the album, the song opens with a repetitive guitar riff, as the other instruments — primarily the saxophone, keyboard and violin — come into the mix. Ellery shines on this track, having been overshadowed throughout the album thus far, and her playing complements Wood’s introspective lyricism well.

“Opus,” the final track of the album, is an instrumental piece, thus bookending the album by sound rather than words. While “Track X” served as a moment of recomposition, “Opus” brings together all the lyrical and sound elements of the album as a last gasp. Once again, the band moves between tension and release.

Overall, the album is an interesting, albeit fractured, debut that shows a band in search of a distinct sound, while also flaunting its members’ musical capabilities.

Gonna give them a listen! Great review!