A feasibility study conducted for the University of California Board of Regents was discussed during their Jan. 21 meeting, recommending the UC suspend its standardized testing requirements after 2025. 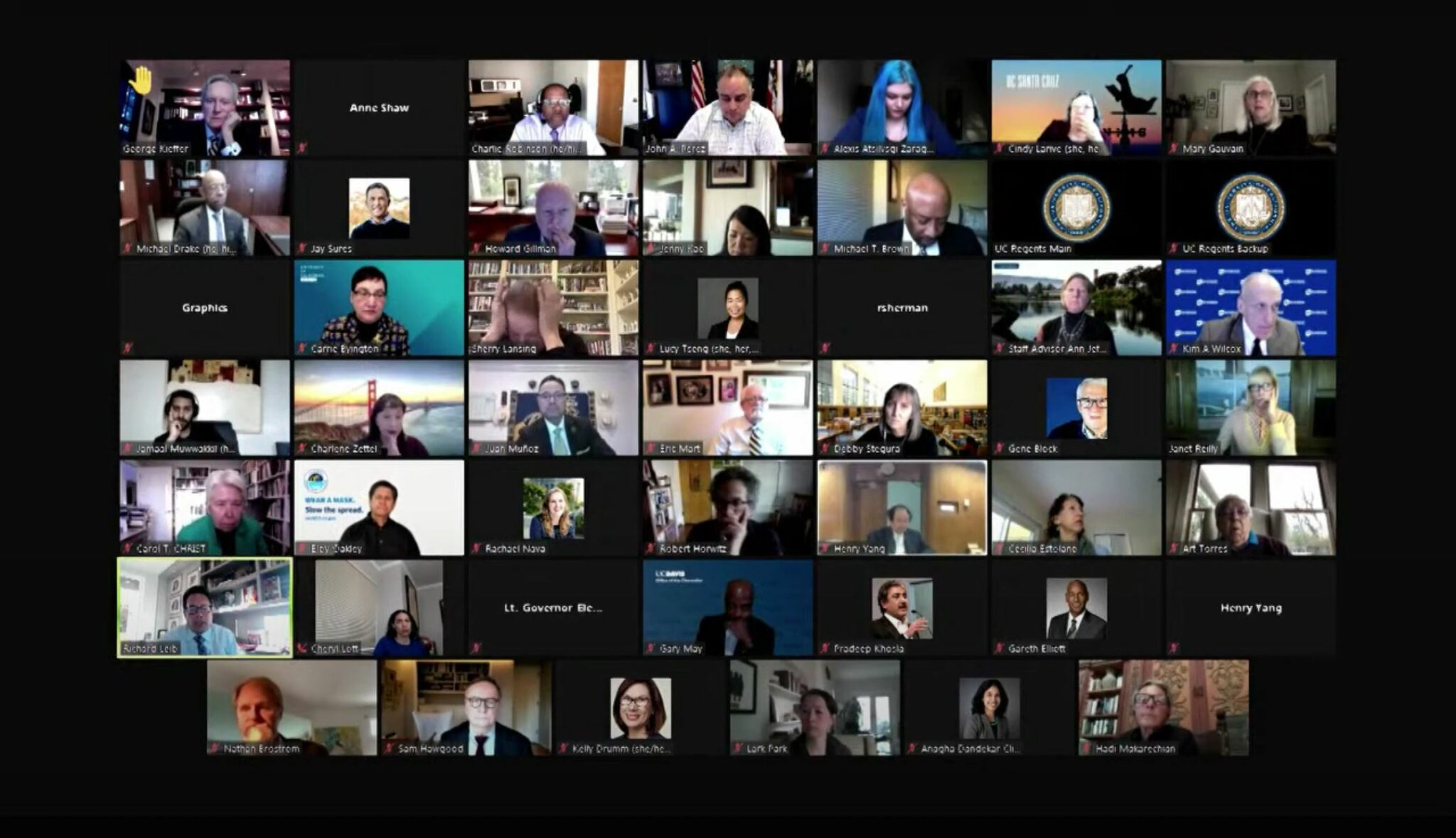 During the meeting, the Regents agreed on the need to eliminate high-stakes testing in the admissions process and aligned with the FSSC’s recommendation of doing so. Courtesy of the UC Regents

During the meeting, the Regents agreed on the need to eliminate high-stakes testing in the admissions process and aligned with the FSSC’s recommendation of doing so.

“We need to go about minimizing high stakes in the admissions process because it is a high-stakes environment that distorts education, poses psychological threats, generates inequity and is worthy of deep attention and exploration going forward,” said Michael Brown, UC provost and vice president of academic affairs, during the meeting.

The recommended course of action by the FSSC was to not have a standardized testing requirement included in freshman undergraduate admissions — starting with Fall Quarter/Semester 2025 applicants — but to instead consider adding a lower-stakes test as an optional data point for further consideration in admissions. The committee said that the Smarter Balanced Assessment Consortium (SBAC), a state-mandated public school test for Common Core State Standards, could be a viable low-stakes option.

“[The Smarter Balanced Assessment] is already required by all California public school students and is aligned with the state’s educational content standards and UC A-G requirements,” Academic Senate Chair Mary Gauvain, co-chair of the FSSC, said during the meeting.

The SBAC was developed in 2010 to assess students’ progress in the K-12 system under Common Core State Standards and is offered at no cost to public schools. Currently, 13 states are members of the consortium and administer the test. The California State University System (CSU) uses the SBAC as one way to place students in first-year English and math courses.

During the meeting, some regents expressed concerns that the SBAC isn’t the most equitable form of testing, since every state does not offer it, and neither home-schooled nor private-schooled students can take it.

“The use of testing to determine whether or not a student is eligible for UC is a practice of the past. We need to focus on gaining information on students and helping them get to a UC,” said Regent Eloy Ortiz Oakley, who is also chancellor of the California Community Colleges, said.

Regent-designate Alexis Atsilvsgi Zaragoza, a member of the FSWG, expressed concern about how students would be deemed eligible and if they would be barred from admission to the UCs if they didn’t perform well on the SBAC. She stressed that the focus of the FSWG was on exploring the usage of the SBAC in a strictly low-stakes capacity.

Speaking on behalf of the FSWG, Zaragoza stated that further modifications to the SBAC would be necessary if it were to be used in admissions — such as identifying and removing any racial disparities or biases within the assessment — but that there wasn’t enough time within the timeline to make all needed adjustments.

The concerns of the SBAC potentially becoming a high-stakes test, including possible biases and disparities in its questions, led the FSSC and FSWG to recommend further study and evaluation of the assessment to determine whether it can be equitably used in the admissions process, while still keeping it in consideration as a low-stakes data point.

“We don’t want to adopt a test for test’s sake; it has to work within the policies and priorities we have with respect to admissions,” said John A. Pérez, chair of the Board of Regents.

“The use of testing to determine whether or not a student is eligible for UC is a practice of the past.”

The inescapable “logic” of those charged with making admission to the UC more equitable and valid.

God help the UC and protect the institution from oversight by idiots.

Pretty soon that law degree from Costco, which dad had to pull strings to make possible will be the reality. Idiocracy will soon be upon us.