You’re scrounging around an archaeological dig when you come across the skull of an animal. It’s undoubtedly a canine, but which one, and how can you tell? This distinction is of paramount importance. The presence of a dog versus a wolf marks a significant paradigm shift and it will change how you think about the site you’re working in. 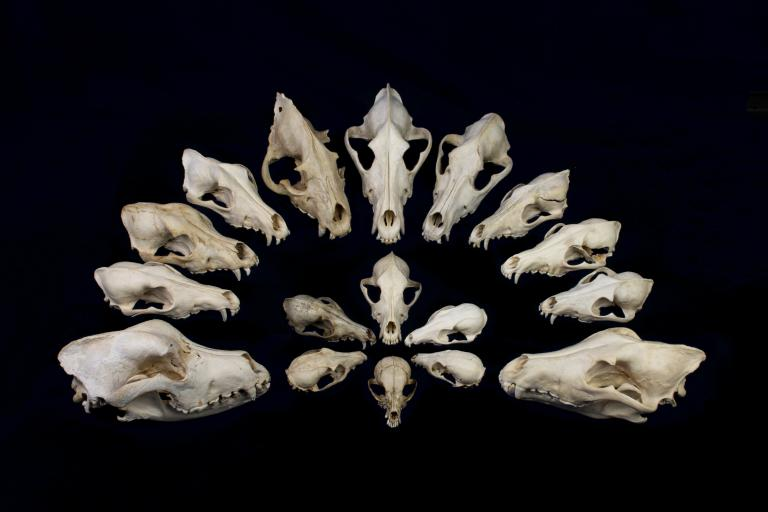 An assortment of skulls, including domestic dogs, wolves, coyotes, a jackal, a dingo, several species of fox and a hyena. Courtesy of Martin Welker and Susan Hamilton

So you think on it. You see that there are a number of methods used to identify canines in the archaeological record. Which one should you choose though, and why?

This is a question that Sarah McClure, a professor in UC Santa Barbara’s Department of Anthropology, and her collaborators at the University of Arizona and Utah State University have been grappling with. Their research, published in the International Journal of Osteoarchaeology, examined various methods used to identify dogs and other canines in the archaeological record.

The project began when McClure was working alongside a doctoral student, Martin Welker, at Penn State University.

Most methods used to identify dog bones in the archaeological record are predicated on the assumption that the archaeologists are specifically differentiating dogs from the grey wolf, the common ancestor of all dogs and — particularly before modern times — widespread all across the Northern Hemisphere.

However, during his studies in North America examining animal bone assemblages, Welker observed a number of canid species found alongside dogs elsewhere around the world complicated and perhaps lowered the effectiveness of such methods.

“How do these methods actually play out in a situation where you have a lot more diversity in the general family of dogs?” McClure said.

“That’s how this project started, with the idea that we could use the techniques that other people had been using and apply them to known collections in museums and research collections of known animals, and then evaluate which ones work best for what kind of canine.”

In order to identify animal remains, archaeologists often make use of known bone measurements to differentiate different specimens which would otherwise share a nearly indistinguishable bone structure. These include traits like the relative size of teeth and the curvature of the mandible, or jawbone.

“We use these measurements that have been standardized since the 1970s because they’re the most common ones that archaeologists themselves use. We wanted to be able to test the methods that people had created sort of emerging from these measurements,” McClure said.

“So everybody knows these measurements. They can be easily recreated and replicated. And so we just went through and started testing them to see whether statistical analyses would be able to place these known specimens into the proper species.”

These analyses compared tooth crowding, which is a measure of the disharmony between the size of the teeth and jaw, the length of the first molar, mandibular bowing, which is a measurement index of the manner in which the mandibles bow, or bend, and finally a general principle statistical analysis, which took all of the data the researchers had and stuck these into a statistical analysis.

“Unfortunately what we found was that there’s no silver bullet, there’s no one method, that is answer master. What we found is that it depends on what the question is,” McClure said.

“So if your question is: ‘Is this a wolf or is this a domestic dog?,’ you should either look at this first mandible length or you should use this principal component analysis that we did.”

Conversely, according to McClure, if one is working in the Western U.S., and they’re trying to distinguish a domestic dog from a coyote, looking at the bow of the mandible is a better bet.

“Essentially, you know, we tried to create a toolkit for archaeologists, where depending on where they’re working in North America or Europe they can use different methods to distinguish what they’ve found,” McClure said.