Only trailing after cardiovascular diseases in the United States — and now competing with coronavirus — cancer is a leading cause of death throughout the developed world, and results in much loss, grief and suffering.

Given this, a fortune has been devoted to cancer research, cancer therapies, treatments and prevention. In 2018, national expenditures for cancer care in the United States alone numbered 150.8 billion dollars, and, with a rapidly aging population, cancer rates can only be expected to rise — and cancer costs with it. 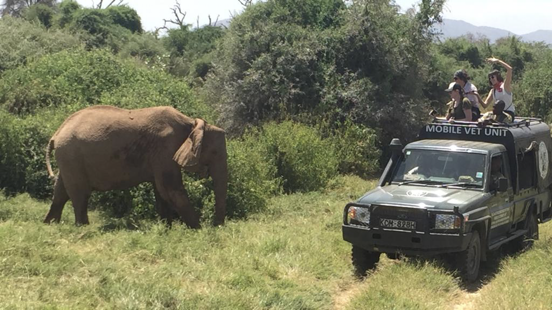 In stark contrast to humans, who only have one, elephants have 20 copies of p53, a tumor-fighting gene. Courtesy of Amy Boddy

However, as is the case for many subjects in the life sciences, important questions surrounding the complicated and multifaceted condition continue to pile on and remain unanswered. Worse yet, cancer research is often focused on cancer from a biomedical perspective, leaving the ecology and evolution of cancer relatively understudied in academia.

But there are rumblings of new developments. The times they are a-changin. Researchers across various disciplines have warmed to the idea of cancer research from broader perspectives, with many across various fields collaborating with the aim of extending the research reach of cancer into new, exciting disciplines and inviting needed perspectives.

Amy Boddy, a professor in UC Santa Barbara’s Department of Anthropology, in collaboration with over 30 researchers from across the world, has been working to identify future trajectories of research into cancer along this lens, with the hopes of steering cancer research from a foundation rooted in cross-disciplinary collaboration and an eco-evolutionary framework.

Around February of last year, Boddy began to advance some of her own questions and edit inquiries from others during the collaborative process. In total, 84 research questions from 33 experts were published, organized around nine major themes.

Specifically, Boddy had questions related to the evolution of cancer-prevention mechanisms across various species and the evolution of tumors — as well as lifestyle and social modifications used to prevent and treat cancer in humans.

“My particular questions really revolved around organismal evolution. Basically how other species solve the problem of cancer. I think evolution can provide a lot of insight for us,” Boddy said.

In addition, Boddy’s interests extend to the tumor itself and how the ecology of the tumor, tumor growth and evolution can be predicted using the same principles ecologists and evolutionary biologists use to understand organismal evolution and life history.

“Why a mouse becomes a mouse versus an elephant becomes an elephant. Why development is fast or slow. I’m interested in whether we can use these principles of life history theory to understand and predict tumor evolution as well,” Boddy said.

It was only as recent as 2013 that Boddy, whose specialty is evolutionary medicine, began studying cancer biology. The field was experiencing one of its first initial surges in growth and interest.

Having previously studied evolutionary principles and taken a comparative approach to studying other diseases, looking at phenotype with regards to disease and comparing various types of animals, Boddy expected there to have already been a body of research looking into cancer from a similar vantage point.

But such a body of research was nowhere to be found.

“I was quite surprised when I started studying underlying the evolutionary principles of cancer biology that we don’t know much about other organisms and their cancer rates,” Boddy said.

Boddy began studying comparative oncology hoping to understand why some species are better equipped to weather cancer than others, such as naked mole rats and long-lived species like elephants. What cancer-suppressor mechanisms exist across the animal kingdom? What genetic toolkits have evolved over history with the aim of defending against cancer? Boddy and her colleagues are itching to better understand these things.

Among these were people like Carlo Maley, a co-author of this publication and a researcher with the Arizona Cancer Evolution Center at Arizona State University. Maley participated in research which uncovered the duplication of TP53 in elephants, a gene which fights cancer cells.

From a more anthropological perspective, Boddy also fielded questions pertaining to patients’ own perspectives regarding cancer and how to shift the mindset around cancer in modern society, particularly with the advancement of cancer treatments like adaptive therapy.

Unlike in standard cancer treatment, the goals of adaptive therapy — rooted in evolutionary theory — dictate that patients and practitioners give lower doses of drugs to prevent creating resistance to chemotherapy drugs. Such practices using the adaptive map work well in mouse models and have been carried out in clinical trials for humans with prostate cancer and breast cancer.

“This challenges our perception on understanding cancer. Many of the terms around treatment and tackling cancer are very much like ‘war on cancer, we’ve got to combat it, we have to fight it,’ things like that. And that can be very problematic when suddenly we’re dealing with a paradigm shift and saying you can actually live with this disease,” Boddy said.

In fact, understanding the patient’s perspective and bringing in more cross-disciplinary research in cancer is key, according to Boddy and her collaborators.

“This perception of the patient side of it I think is really important, and that really comes from having some people in this cross disciplinary research team in the humanities. So, kind of having this perspective on how people will perceive this change is also key,” Boddy said.

“Some people in the EEMB perspective might just think about the ecology and evolution of tumor drivers and all of that, but we always have to bring it back to human patients if that’s what we’re really interested in solving.”