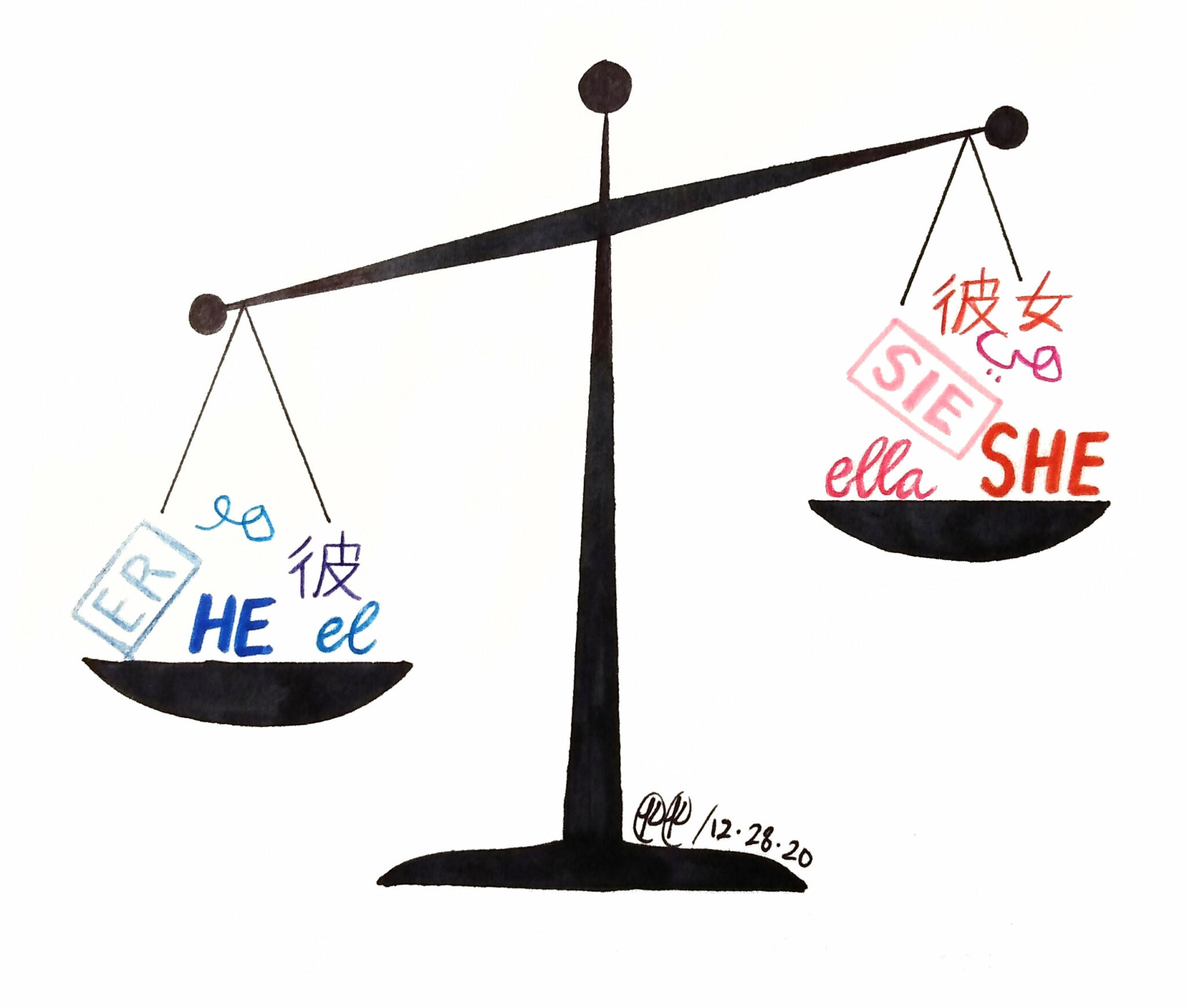 Sometimes my family wonders why I repeatedly point out disparities in gender equality. It seems superfluous; there are countless fights to fight. Who am I to nitpick these instances of inequality? And what am I contributing to changing this culture? While I can agree there has been significant progress in the image and production of gender in the mainstream, there are still things that bother me.

This is not my feminist manifesto. I want only to point to one of many problems. Our vernacular — it’s a man’s language.

“She was warned. She was given an explanation. Nevertheless, she persisted.”

There are specific words directly associated with the act of breaking glass ceilings. They illustrate pictures of women deviating from society, often in negative hues. This vocabulary celebrates women’s resilience and becomes mantras of social movements. But for how much longer are we going to chant, “It’s [insert-year] now; [insert-social-inequality] is not acceptable”?

She was already a mother and a wife. But she wanted more.

The stories of men who want more from life other than marriage and procreation are told without preface in our textbooks. Conversely, Dolores Huerta — civil rights activist and labor leader — was criticized for raising her eleven children while co-founding the National Farmworkers Association. Yet Huerta’s story was effectively written out of history.

She was rejected and her application was returned, as the position required heavy responsibilities.

Patsy Mink, the first US Congresswoman of color, was rejected from medical school and various jobs on the premise of gender. Vocabulary such as “heavy responsibilities” reiterates binary gender stereotyping where dominance and strength categorize men as masculine. And where congeniality and sympathy define femininity in women.

The English language is riddled with problems other than inconsistent grammar, overused slang and unpredictable pronunciation. Though not a gender-based language, there exists a blatant sexist tone. There are no male counterparts to words like “working mother,” or “career women.” Men and women have irreciprocal words to describe their individual position and status. In English, more words exist to describe men, although the number of lewd expressions to describe women is ten times greater.

Yet gender inequality is not only present in English. Specifically in Romance, Semetic and Classical languages, gendered nouns are employed. This means that many words switch gender in the presence of a different vowel or ending — for example the Spanish “-o” or “-a” ending. This has less to do with a feminine or masculine connotation of words, but rather the added effort to include women in the conversation.

The implicit sexist quality of language does not solely silence women. Rather, it renders them invisible.

Languages with grammatical gender often require more complex conjugations. In Italian, the feminine ending “essa” is added to a masculine noun. For example, the masculine “professore” changes to “professoressa” in the feminine noun. Furthermore, it is common for plural conjugations to be labeled by male-gendered pronouns. In a group of ten women and one man, the masculine form of third-person plural is used.

The implicit sexist quality of language does not solely silence women. Rather, it renders them invisible. It honors an unsaid agreement that the prototypical human being is male. As a world, we stand at a precipice after having normalized sexism through our use of language.

Like many fellow Gauchos, I took Spanish throughout high school. It was exciting to learn a language other than English. I did not understand the need for gendered nouns, nor the focus on masculine grammar. I dismissed this, because I often feel privileged to be a native English speaker. Students around the world are required to learn English, beginning in early grade school. Although adopting it as a second language may contribute to a more communicative world, it will not be any more of an evolved world. English simply reflects the same universal gender disparities.

I am now learning Arabic so that I can communicate with my extended family in Lebanon. Though I am proud to take time to understand and celebrate this sector of my identity, I can’t help but be hypersensitive to the distinct differences in culture.

Aware of the often-pious Arab culture, I find countless parallels between the language and the subjugation of women. Girls do not become women until they are married off, no matter their age. Unmarried women are sometimes called “beyra” (بايرة), meaning unwanted and unprofitable land. Women are attachments of men, objectified, and not separate beings. As a result, the speech does not reflect what a speaker wants to say, but instead expresses what is socially accepted. This silencing of women is nearly palpable.

But it is not all negative. Many languages around the world are working to create gender-neutral vocabulary. In Arabic,“huma” (هما) and “intuma” (انتما) are being implemented as pronouns for gender-nonconforming people. Awareness of this inclusive language is not widely advocated across the many Arab countries. However, efforts are being made to educate people, such as Wiki Gender, a collaborative dictionary for gender-inclusive Arabic.

Sometimes the most powerful action we can take is to use our words. But when that vocabulary reflects a history of invisibility, inequality and gender stereotyping, I suggest we make a new one.

Maya Salem looks to the day when culture is not reinforced by the constructs of language.