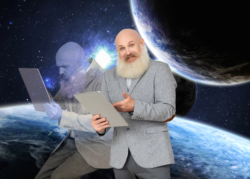 While some professors were initially skeptical, the department has quickly adopted it as its main method of teaching, and its benefits have quickly become apparent. Students no longer need to practice basic hygiene to look presentable on camera, nor possess a corporeal form at all to attend their lectures.

“Scientifically, our spirit bodies have been shown to transmit data 10 times quicker and more reliably than a Comcast internet plan,” explained someone from the religious studies department. “Attendance has been up almost 250% in the last quarter! From 22% to an astounding 54% on average.”

Intro to Astral Projection (AssPro, as it’s commonly referred to) is usually taught as a full course in a given quarter, but department professors have instead started implementing one-week crash courses on the mastery into their lesson plans in order to prepare students for the quarter.

“I’ve always had trouble mustering the motivation to attend my digital lectures,” explained second-year religious studies major Spirie Tual. “But now, my projected consciousness can learn the intricacies of Pre-Tridentine Catholicism while my body plays Minecraft with the boys!”

Additionally, students with particularly busy schedules during the day are now being accommodated with “dream” lectures, which are lectures that are metaphysically sent to students late at night in the form of dreams — although many students complain of forgetting about 95% of the lecture within 10 minutes of waking up.

Despite its obvious benefits, drawbacks have also surfaced, such as complaints of students occasionally getting lost in the astral plane and a lack of password protection occasionally allowing for wayward spirits to crash lectures (dubbed “Spirit Bombing”). Hoping it will soon overtake local internet service providers, professors are still working on implementing security features for AssPro attendance. The process of clearing the astral dimension of the demons, ghouls and Comcast employees who live there may take some time, but AssPro professors are confident in their techniques.