The Daily Nexus
Opinion
Giving White Literary Canon the Boot
December 19, 2020 at 9:00 am by Kiana Perez-Granados 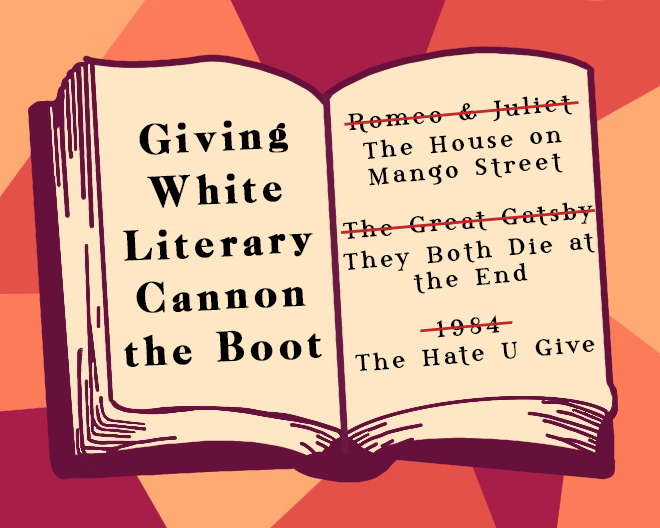 When I was younger, I never found myself attracted to Shakespearean dramas or to the archaic language that doth be in those fancied works. Though such works do not appeal to me, it is clear that they are implemented into curriculum across the United States for the sake of savoring history and putting white men on a pedestal. The problem with our schools’ curriculum is that they shy away from authors of color, as well as women authors of color, who imbed their own rich culture in their works and diversify the nation.

It is recognized that most of what we read in school is written by white people. For example, the titles “Romeo and Juliet,” “Lord of the Flies,” and “The Illiad” may seem familiar. It is important to acknowledge that while these stories are not written by people of color, they are also not about people of color. To justify this, Pamela Mason, director of Ed School’s Language and Literacy program, states that teachers’ comfort with white literary canon plays a significant role.

In other words, teachers are afraid to experiment with other literature because they haven’t been fully equipped for the change; many would rather stick to the “common” range of compositions that involve “middle class, white, cisgender people,” as stated in a Harvard article discussing the need to modernize reading lists.

This obtuse issue extends not only to middle school and high school literature, but younger children’s literature as well. In order to raise accepting generations that diminish racism, it is important to implement diverse works from an early age. It is unfortunate to think about all the children of color who might ask one day: “When will I get to read something by someone who looks like me?”

The point of exposing these white-washed reads is not to completely shit on them. In fact, some of these books — including “The Great Gatsby” by F. Scott Fizgerald, “Pride and Prejudice” by Jane Austen and “1984” by George Orwell — are considered favorites. However, it does not make up for the lack of diversity in the school’s literary curriculum.

Upon researching which specific works are taught in English high school classes, an article published by Eric Digests, an academic article archive, relayed that the majority of public schools teach “Romeo and Juliet; Macbeth; Huckleberry Finn; Julius Caesar; To Kill a Mockingbird; The Scarlet Letter; Of Mice and Men; Hamlet; The Great Gatsby; Lord of the Flies.” This list only justifies the argument that these are the primary works being shown to the youth, and not a single one of them are written by an author of color, a woman of color or an author in the LGBTQ+ community.

Nearly all of the plotlines in many white literary canon novels have white protagonists. In an effort to counter this, the novel “To Kill a Mockingbird” by Harper Lee touches base with issues of race, but even these kinds of books “relegate characters of color to the side while white characters take the spotlight.” Furthermore, women and LGBTQ+ authors are tossed to the side.

Publishers refused to take on works written by women due to the overwhelmingly “sentimental” plots. To put it simply, according to them, women were much too soft, especially for the public. Books that were published and garnered popular only gained attention for being controversial or problematic.

I firmly believe the curriculum of schools should reflect progress, specifically the change involving how people have learned to love one another for being human and nothing else.

As a senior in high school, I had my own experience reading a highly “sentimental” book written not only by a woman, but a woman of color. “The Joy Luck Club” by Amy Tan highlights four different distant relationships between mother and daughter. The excellence of this novel stems from how Tan discusses generational and cultural differences. This novel touched and enlightened me because I was previously ignorant to the topics that were mentioned. I consider myself lucky to have read this book and could only hope that other students have similar experiences with other diverse literature.

Moreover, the LBGTQ+ community deserves literary representation as well. Seeing as it is a common goal in society to live peacefully, there is no better way to do so than to include everyone, especially in literature. Anyone who identifies as other than cisgender or heterosexual has felt the pain of ommision and seclusion.

It is said that, “With the lack of LGBTQ+ related content in history and health classes, many students struggle with questions of sexual orientation and gender identity.” Incorporating texts with LGBTQ+ characters or by authors from the LGBTQ+ community can be valuable for students and people struggling with their identities. It may also reach people who identify as cisgender to further understand the complexities of the culture and become accepting toward sexual and gender diversity.

The diversity gap not only extends to what is being read, but to what is being published. It is much harder for a black woman to get published when we live in a canonized world. This not only strips one of their dignity, but of their potential to be heard. Mostly white creators are awarded for their works, and it is “classic” novels that are sold at a cheaper price than newer novels. A marketing tactic like this one makes books of white literary canon more accessible to the public in order to reel in audiences, ultimately leaving authors of color in a tough spot.

While living in the year 2020, one might assume that society is continuously evolving for the better. This statement wouldn’t be entirely wrong, but if the dilemma still stands that schools are shying away from diversity in all aspects, there is a major issue. I firmly believe the curriculum of schools should reflect progress, specifically the change involving how people have learned to love one another for being human and nothing else.

This world is still very imperfect, but it wouldn’t hurt to grab books like “The Hate U Give” by Angie Thomas, “They Both Die at the End” by Adam Silvera or “The House on Mango Street” by Sandra Ciscneros. Representation is key and there are millions of unread stories that can change the world.

Kiana Perez Granados believes it is never too late to start reading something with a bit more flavor.

This is nonsense! Books like things fall apart, esperanza rising, their eyes are watching god, 12 years of slave, and the joy luck club has been an important member of the literary canon for decades(I’ve read all of them). New books by minority authors like the fishermen have been added to the canon as well. Let me tell you why there is no diversity in old English writing because there isn’t any author who identifies as a minority in 11-17 century Europe. There is no equivalent of a minority Shakespeare that fundamentally changed English literature. That is not to say… Read more »