The Daily Nexus
Sign of the Times
“Harry Potter” and the Heat Death of the Author
December 18, 2020 at 9:00 am by Katie Caracciolo 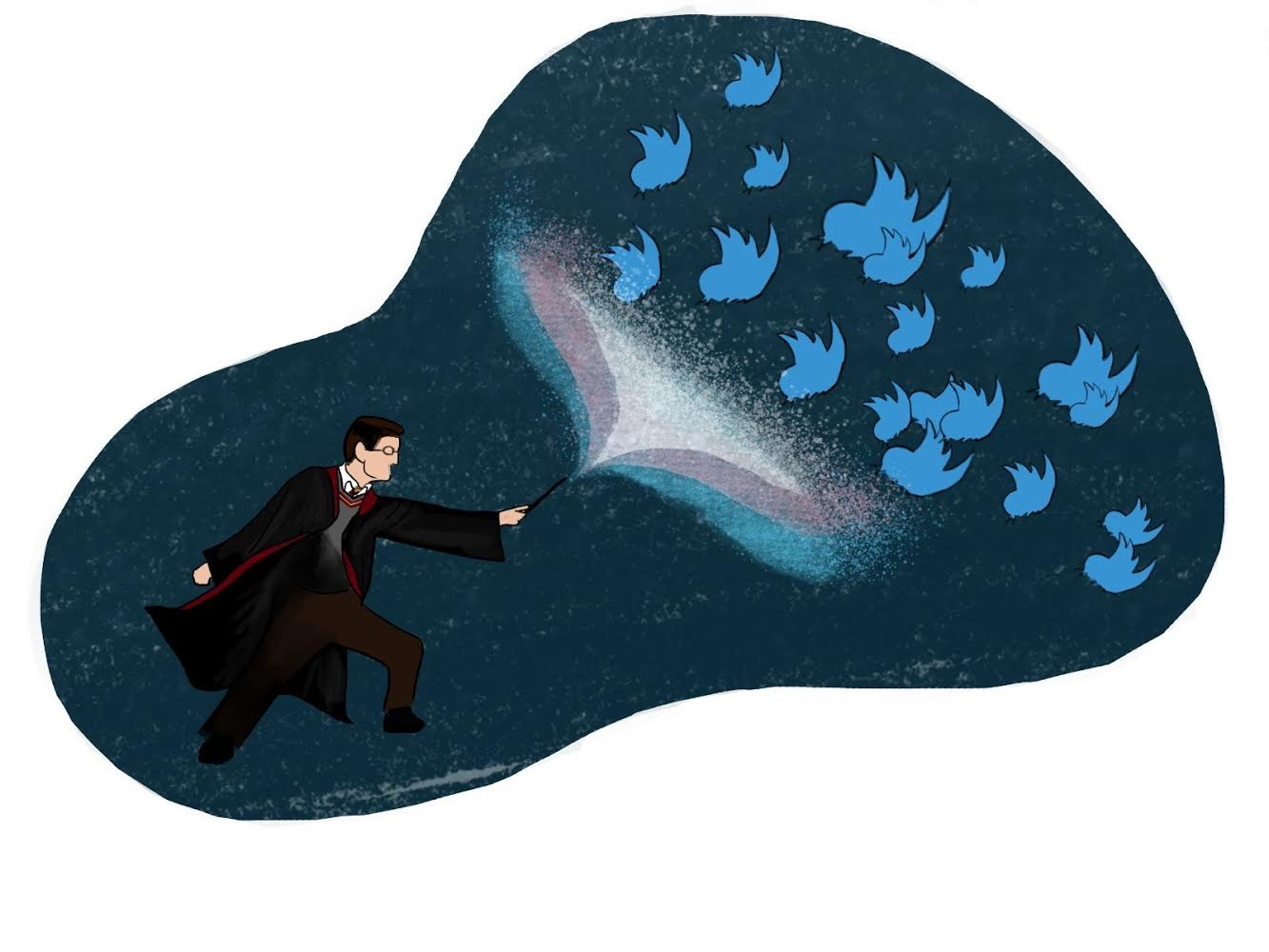 This September, I embarked on one of the final rites of passage of my young adulthood: the last “Harry Potter” movie marathon of my life. For reasons that will soon become evident, I streamed the films illegally and sat with feelings of mixed discomfort and nostalgia as the adventures of The Boy Who Lived unfolded on screen.

Several months ago, infamous “Harry Potter” author J.K. Rowling published a transphobic tirade to her Twitter account, the hateful text of which I will link but dare not repeat here. Suffice to say that millions of readers worldwide, including myself, took to social media to condemn Rowling’s words and express their deep hurt, especially considering the series’ surface messages of inclusion, acceptance and the power of friendship. As Twitter user @notafootstool puts it, “I grew up as a trans child reading your books as an escape. I would often pick out names from characters to give to myself, before I ever felt comfortable in who I was. This decision, to support people that hate me, and want to do me harm. It brings me to tears… Why. Why?”

This bigotry, however, did not come out of the blue, as longtime readers and critics of the “Harry Potter” series will know. From the reprehensible comparison of lycanthropy to the AIDs epidemic to the deeply anti-semitic portrayal of bankers of the Wizarding World as money-obsessed goblins, J.K. Rowling’s sloppy and hateful rhetoric shines through in the prose of every “Harry Potter” novel. Perhaps most notable to those who are not even familiar with the novels is Rowling’s belated insistence that Headmaster Albus Dumbledore is a gay man, months after the final book’s publication and years after she had already killed off the iconic character. Even before the dawn of Twitter, the examples of her bigotry bleeding into the pages of her children’s book series are countless.

Yet, if one were to simply open TikTok, it would seem that none of this heartbreak had occurred. In fact, “Harry Potter” seems to have a stronger presence than ever on the app used widely by Gen Z and millennials, as seen in the rise of “#dracotok” (a tag that, as of writing, has 6.1 billion — with a “b” — views), and the popularity of Hogwarts student POVs. While countless videos critical of JKR’s bigotry and deeply problematic portrayal of minorities have graced my “For You” page, the majority seem to focus on the joys of the text while ignoring its undeniably problematic elements.

In much the same way that the LGBT community has reclaimed the word “queer,” it seems that Gen Z is attempting to reclaim “Harry Potter” from its hateful creator. In many ways, I support this stance, as a progressive reading of the text not only fits within the real, diverse world that J.K. Rowling seems to be in denial of, but it would also surely make the author squirm.

We see things in those stories that Rowling could never have seen, and certainly did not intend to suggest. We see that Luna Lovegood and Harry Potter’s ostracization by their peers resembles the hardships of young trans people. We see that the love between “best friends” Remus Lupin and Sirius Black could surely be more than platonic. For years, countless readers have headcanoned Harry and Hermione Granger as POC and countless characters as LGBT. Even as far back as the theatrical release of “Goblet of Fire” in 2005, fans have mined the series for homoerotic content. The text, and indeed the fandom, has long since taken on a life of its own, far outside the author’s control.

What concerns me, however, is the high volume of TikToks that praise the series without acknowledging the hateful rhetoric of the author or of the text itself. Not only is this denial exclusionist and deluded (not to mention the repugnance of thirsting after underaged characters and actors), but it is also intentional. As TikTok user @corygott comments on a video about problematic classic authors, “My brain has done for [infamous racist and anti-semitic] Lovecraft what people are trying to do today with Rowling. As far as I’m concerned Cthulu itself manifested and wrote all that.” 158 likes.

I have delighted in seeing the ways young people have bent the “Harry Potter” stories in ways that Rowling would hate, but that does not mitigate the harm done by supporting Rowling’s work in any way.

As much as I argue for the  “death of the author” in the context of the interpretation of a work, that does not apply to the current situation where any support of Rowling’s work could directly destroy the lives of already oppressed communities worldwide. She is the “second highest-paid author in the world,” according to Forbes, meaning she has the power and wealth to influence British and worldwide policies on trans issues, fund conversion therapy and outwardly protest trans rights. She has the power to kill.

Further proving the danger of Rowling’s hateful rhetoric, after reading Rowling’s blog post that I refer to at the top of this article, GOP Senator James Lankford of Oklahoma quoted Rowling’s “transphobic manifesto” when he “blocked Senate consideration of the Equality Act,” which “would amend civil rights bills … by adding ‘sexual orientation’ and ‘gender identity’ to their lists of protected classes.” This example proves the danger of Rowling’s far-reaching influence, especially when combined with her recent transphobic comments and subsequent doubling-down on TERF ideology.

I have delighted in seeing the ways young people have bent the “Harry Potter” stories in ways that Rowling would hate, but that does not mitigate the harm done by supporting Rowling’s work in any way.

As a “Harry Potter” fan, I can make all the excuses I’d like. I can say I will only pirate “Harry Potter” movies or buy merchandise secondhand. I can point to past movie casts’ rejections of the ideology of the author, whose work formed the foundation of some of the actors’ careers and funded their entire lives (with the exception of “Fantastic Beasts” star Eddie Redmayne’s halfhearted defenses, as he still stands to lose a paycheck), but in the end, the only true solution is the outright rejection of J.K. Rowling and her work as one and the same.

Rowling herself brazenly declared that “None of that may trouble you or disturb your belief in your own righteousness. But if so, I can’t pretend I care much about your bad opinion of me.”

And, certainly, if I were a billionaire who wrote children’s novels filled with hateful stereotypes and bigoted metaphors, I wouldn’t care either. That is, until that wealth and renown are unequivocally threatened and condemned. This means that we need not only a boycott of all content owned by Rowling but a complete erasure of She Who Shall Not Be Named from the collective cultural consciousness.

Truthfully, I know that these characters will live rent-free in my mind for the rest of my life. A series you’ve dedicated years of your life to, particularly your childhood years, does not vanish from your psyche overnight. But I believe that J.K. Rowling’s fall from grace, like countless other disappointments and horrors of the last 20 years, will turn out to be an essential part of the full maturation of our current society’s youngest generations.

Katie Caracciolo will not be reading the “Harry Potter” series to their future children.

What parts specifically in Rowling’s essay do you take issue with? It seems like a nuanced look into her experience and thoughts on trans issues. Cancel culture is a cancer and you are spreading it blindly.