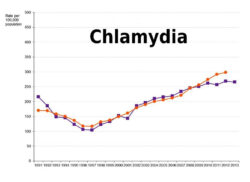 While the coronavirus pandemic grips the nation’s news cycle, UC Santa Barbara students have trended toward a more niche infection: chlamydia. We spoke to local third-year Logan Bautista about his experience with the STD.

“Yeah, I used to want to get COVID-19 so I could post about it and break the stigma,” Bautista said. “But then so many people got infected, and it became too mainstream. So the next logical step was to get chlamydia. You know, reopen the conversation about STDs or whatever.” Bautista has been a trendsetter in the community, spreading chlamydia to at least three other voguish students in the past week.

There have been some concerned about this latest fad. Local second-year Jack Soduke had some notable comments on the growing craze. “Hi there! I’m Jack Soduke, here on this fine Thursday to engage in the debate regarding chlamydia versus no chlamydia,” Soduke said. “I am representing the recently formed ‘Just Say No to Chlamydia’ campaign, brought to you by Associated Students. Chlamydia is a harmful STI, and those with chlamydia are nasty freaks, according to a 2014 study.”

Soduke’s points were not wholly untrue. An even more recent poll has shown that 52% of Isla Vista residents consider those with chlamydia to be “total downers” and “should not be allowed within a square mile of Goleta Elementary School.” Others opposed to the chlamydia craze have said that they “wished more trends were accessible to virgins.”

The opposition to Soduke, Manny Fuchs, issued a rebuttal: “Jesus Christ, Jack, stop being such a weakling. You’re just salty because I get more chlamydia than you. Ol’ Chlammy is just embarrassed to be around anyone who has anything to do with Campus Cucks.” Jack Soduke is indeed the social media chair of Campus Cucks (Formerly Campus Republicans). “Chlamydia has gotten me more points, clout and hoes than anything else in the past year. It’s totally the move right now, bro. Quit talking crap and start spreading the clap. It’s time.”

Fuchs is supported by the majority of Isla Vista, even by those who consider chlamydia to be foul. Social media has been abound with various “Clap Challenges” and calls to get STI/STD tested “for points.” I.V. resident Big Z Fishman tweeted, “I’m about as OK with frats burning couches as I am with how much it burns when I piss,” in a clear display of pride for his diagnosis. UC Santa Barbara has issued no statement on the 800% increase of chlamydia cases in Isla Vista.

Stew “Soupy” Gumbo does not have chlamydia but likes to keep up with the latest trends.