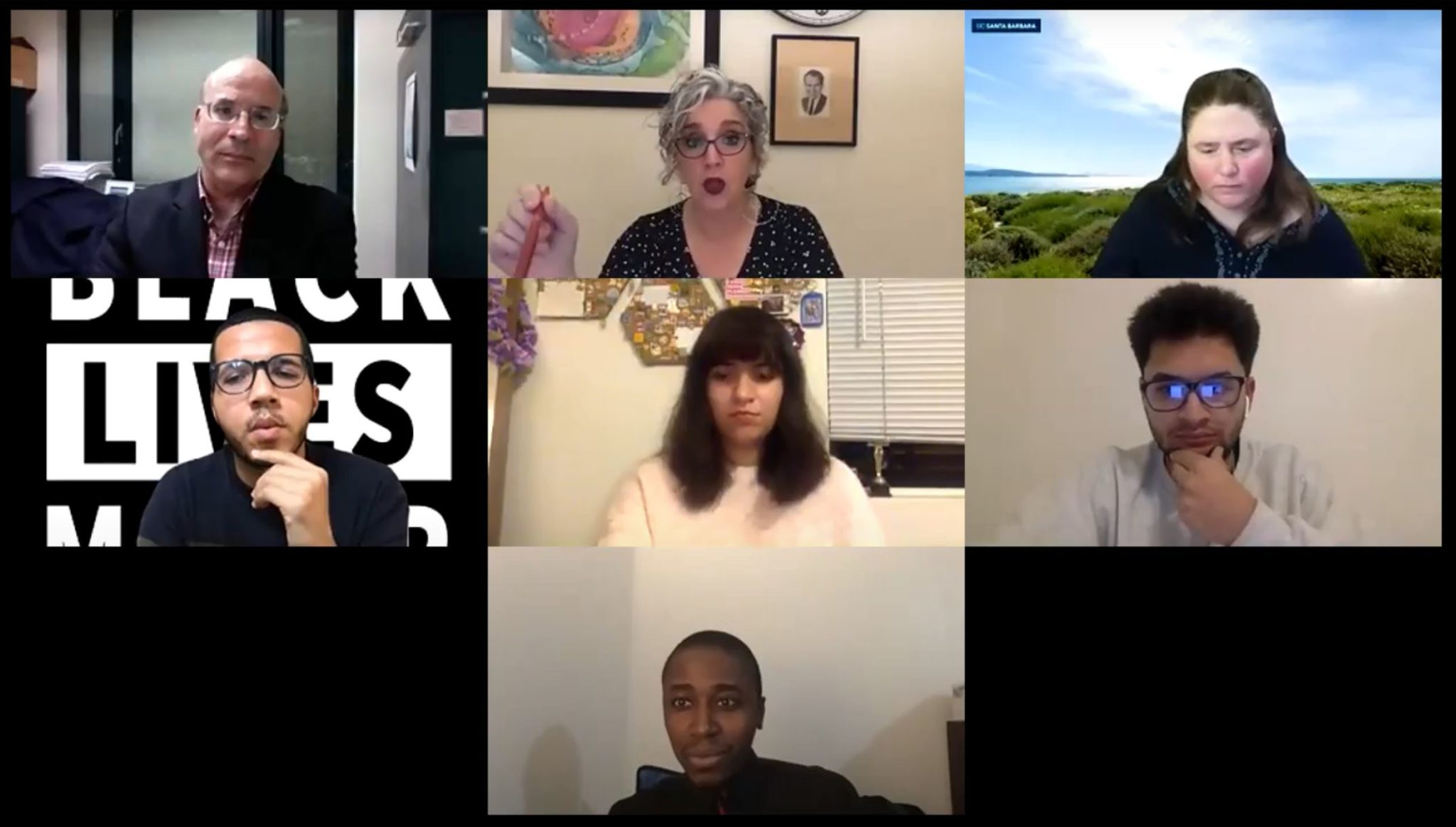 The panel began with personal introductions and segued into a group dialogue about the importance of public political forums and discussions. Courtesy of the Walter H. Capps Center

The first panel of the two-part event, which took place on Oct. 26 prior to the election, revolved around the topic of  “what students want” from the election results. In the post-election discussion, participants reflected on how they felt about the results, Trump’s four years in office and the future of the U.S. under the leadership of Biden and Harris.

The panel, which also included history professor Salim Yaqub and Black studies professor Terrance Wooten, began with personal introductions and segued into a group dialogue about the importance of public political forums and discussions. Later, panelists fielded election questions from the online audience, who tuned into the event through Zoom and Facebook live.

Barthelemy felt compelled to join the panel due to the current political climate in this country.

“I wanted to participate because college students hold so much promise for the future and we all need to be familiar with what is going on in our country politically,” Barthelemy said in an email interview with the Nexus. “The stakes are too high for us to not pay attention.”

One of the most pressing topics discussed during the event was the close margin of the race and what that signified about division in America. At the time of the panel, Biden had received 279 electoral votes to Trump’s 217 and was leading the popular vote by over five million votes, according to the New York Times. Barthelemy said she experienced anxiety and sadness from the results after having seen millions of Americans cast their vote for the incumbent.

“My feelings and opinions between the first [panel] and the second remained the same, but I found myself more emotional during the second event. That is because I have been struggling emotionally with the fact that 71 million people voted for Trump even when he flames the fires of division, and emboldens white supremacist hate groups,” Barthelemy said.

The panel later moved into a more detailed conversation about their faith in American democracy amid Trump’s election fraud claims and his refusal to concede.

“We see a lot of change concurrently happen because of people raising their voices and I think that happened this election as we saw a huge voter turnout,” Padilla said during the discussion. “The ideology that the election was stolen from [Trump] is false and we shouldn’t keep bringing it up because if you look at the numbers, it is just factual that more people voted for Biden and the electoral votes went to him.”

Wooten recounted his feelings throughout election week as results came in, noting that while Biden was not his ideal candidate, his victory was necessary for the immediate future of America.

“Every day comes with some new level of uncertainty and anxiety,” Wooten said during the panel. “I have a spout of hopefulness for our nation as I think about what a new administration’s response to this pandemic might look like.”

Alsayed noted that Biden and Harris had many points of contention during the Democratic primary debates earlier this year on issues such as public school funding and police, leaving him wondering how that will affect their leadership.

“How can the future president and vice president make sure that they aren’t butting heads and that their ideologies don’t clash?” he asked the other panelists. This led the group into a dialogue about cabinet members and governmental checks and balances.

With the majority of school events online this fall, Barthelemy emphasized the importance of the UCSB community coming together, to educate and converse with one another.

“These are really stressful times we are living in, both politically and in terms of COVID, and being on the panel reminded me of how much I need to be able to engage with others to feel both supported and challenged,” Barthelemy said. “I hope we provided an example of how you can engage in productive dialogue with one another and that it isn’t about scoring points, but rather listening earnestly with open hearts and minds.”