The Daily Nexus
Sign of the Times
From Cobwebs to Commentary: Horror Films Have More To Offer Than You Think
October 31, 2020 at 11:00 am by Mikayla Buhbe 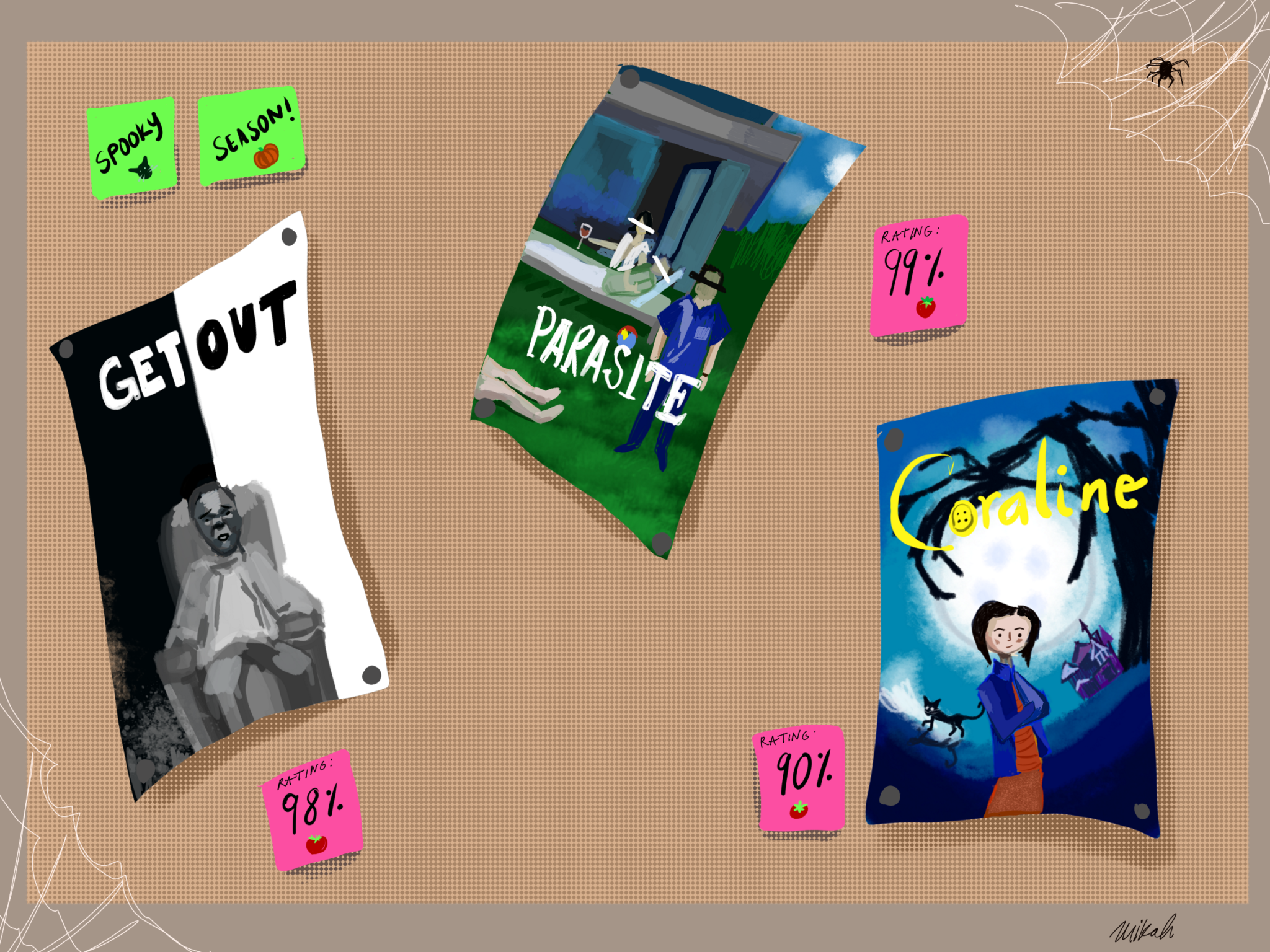 Love ’em or hate ’em, horror movies are a token part of the Halloween tradition. In my family, the scary movie fest runs from the beginning of October all the way through midnight on Halloween, and the vibes are stellar. Whether you go for a binge of the classics or the childhood nostalgia (and trauma) of a  “Coraline” watch party is up to you, but it’s officially spooky season! That means we’re breaking out the jump scares, popcorn and debates over who in your friend group would be the first to go if you were all trapped in a haunted house.

From slashers and psychological thrillers to gruesome monsters and ghosts, horror as a genre has an incredible range of content that can appeal to an equally impressive range of audiences. Perhaps even more importantly, horror is in a unique position to use that range as a vessel for social commentary.

For the most part, films that directly tackle complex societal issues force audiences to confront such problems head-on. While this approach is absolutely valuable and key to initiating further dialogue, horror movies can create distance between moviegoers and social issues without downplaying their intensity. They use allegories and parallels that are impossible to ignore, all while pushing audiences to consider what is actually at the core of their fears. By doing so, horror films allow us to address that age-old revelation: The real monster is ourselves … and our fucked up society.

Horror as a genre has been making commentaries — both good and bad — on topics like race, gender and sexuality for decades. Many of these films unfortunately end up adopting tired or just straight-up offensive tropes, like those centered around mental illness or cultural appropriation. Other times, horror films do contain key messages, but they show up in the form of throw-away lines or vague relationships that creators refuse to openly address. Lately, however, horror seems to have taken a turn for the better. In the past few years, the genre has been pivoting toward stories that are explicitly centered around social commentary and social justice, targeting a wide range of audiences in the process.

The most obvious example is Jordan Peele’s critically-acclaimed and award-winning 2017 film, “Get Out.” Even if you haven’t seen the movie, chances are you’re familiar with the wave of attention it got from critics and audiences alike, as well as the massive cultural (and meme-related) impact it had. Without spoiling too much of the story, the plot essentially centers on the main character, Chris Washington, a successful Black photographer, as he visits his white girlfriend’s family over the weekend — a trip which ultimately turns out to be a trap.

Not only does “Get Out” brilliantly subvert the Black-character-dies-first horror movie trope, it also tackles the many, many layers of racism in America again and again throughout the film. From police interactions to microaggressions, systematic racism and white liberal racism are at the center of the movie’s social commentary. Using the angle of a white suburban setting especially heightens the impact and relatability of the movie as a whole, particularly in terms of the target audience. Peele describes how the movie was written for Black audiences to identify with Washington’s experiences and the “horror [in] America,” but the nature of the movie is also powerful in its challenge to “woke” white people. “Get Out” is the film that reminds audiences that we don’t have to be exploring abandoned cabins or far-removed summer camps to find horror — it’s been right in front of us at Whole Foods the entire time.

While “Get Out” is a fantastically literal approach to social commentary, other films make use of subtler and simpler perspectives. “Scary Stories to Tell in the Dark,” a film directed by André Øvredal and based on the book series by Alvin Schwartz, was released last year to considerably less acclaim than “Get Out,” but with similarly relevant themes. And, yeah, those are the same books we all checked out of the school library in third grade and returned instantly because the pictures freaked us out. In movie form, “Scary Stories to Tell in the Dark” is a classic teen-ensemble horror flick set during the Vietnam War, complete with a spooky book written in blood, haunted houses and various monsters created with each character’s specific fears in mind.

Not only does “Get Out” brilliantly subvert the Black-character-dies-first horror movie trope, it also tackles the many, many layers of racism in America again and again throughout the film.

Despite its somewhat basic storyline, the movie is chock-full of underlying messages about war, familial abuse, racism and environmentalism, all of which tie in beautifully and boost “Scary Stories to Tell in the Dark” to greater levels of complexity. Perhaps most importantly, the social commentary isn’t just tacked on for brownie points — all of the themes are incredibly pertinent today. From corporate greed as a direct cause of environmental degradation to blatant racism against Mexican-American workers, the movie clearly points out how the societal issues of the 1960s are still very much present today.

Though “Scary Stories to Tell in the Dark” isn’t as intricate or poignant as some of the other films within the horror genre, it’s not necessarily trying to be and that’s the point. Unlike “Get Out” or “Us,” Peele’s other horror masterpiece, “Scary Stories to Tell in the Dark” is directed at a much younger audience. The movie is like an introduction to the genre, and what better way to start young horror fans off right than by showcasing how these stories can mirror real life?

Horror movies with social-commentary themes also aren’t something that appear to be going away any time soon. Director Scott Cooper recently announced that “Antlers,” an upcoming horror movie about the wendigo, an Algonquian spirit, will be released in early February 2021. While working alongside producer Guillermo del Toro, a horror movie veteran known for his work on “Pan’s Labyrinth” and “Crimson Peak,” Cooper described how the wendigo spirit serves as a reminder of how mankind — Americans in particular — have been abusing the environment and Native American lands for decades. The film was made with the guidance of several Native American advisors and experts, who further elaborated that the representation of “greed and colonialism” is at the core of the wendigo story.

Judging from the trailer, “Antlers” will definitely fall into the adult horror category. Only time (and the reopening of movie theaters) will tell what the reception of “Antlers” is for an American audience confronted with the realities of a colonial past, but personally, I know I’ll be first in line for the premiere.

Obviously, not all horror movies have intense, deeper meanings or social justice themes attached to them, and that’s absolutely fine. Sometimes, a scary movie is just a scary movie, and those can be fun to watch, too! But all too often, horror gets ignored or disregarded as a genre that can be incredibly powerful and relevant. Just six horror films have ever been nominated for Best Picture at the Academy Awards (not counting the genre-splicing “Parasite”), and only one has won. As we continue to become more cognizant of the massive impact that these films can have, I hope you remember that Halloween only comes once a year, but horror movies are there to keep you up all night whenever you want!