The Daily Nexus
Sign of the Times
The Case Against Amy Coney Barrett
October 29, 2020 at 9:00 am by Sophia Lovell 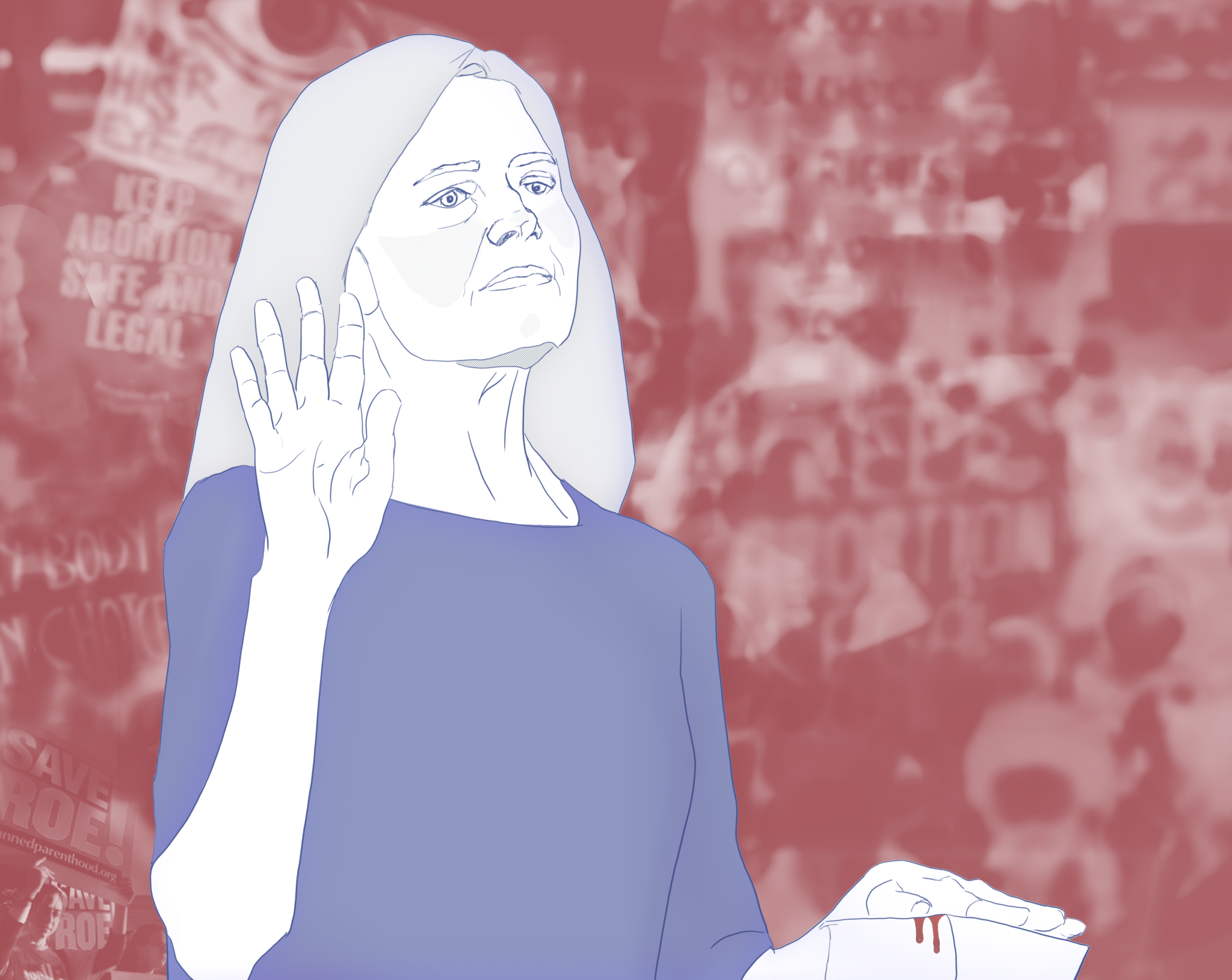 In the early morning on Oct. 27, Amy Coney Barrett was sworn in, confirming her position in the United States Supreme Court. She has filled the open seat left by the death of the beloved Ruth Bader Ginsburg. Previously, the court had been split at a 5-3 ratio to the conservative side, raising concern for liberals. With the confirmation of Coney Barrett, the court is now split … President Donald Trump nominated Coney Barrett and left it to the Senate to vote before the election. Coney Barrett was confirmed by a 52-48 vote in her favor and is the third Supreme Court Judge nominated by Trump.

There was speculation as to whether or not Trump was correct to nominate a judge so close to Election Day. Coney Barrett was sworn in a mere eight days before the 2020 election. This mimics a similar situation that happened in 2016 at the end of former President Barack Obama’s second term. Obama’s nominee, Merrick Garland, was denied both a hearing and vote, with Republican Senator Mitch McConnell, saying, “The American people should have a voice in the selection of their next Supreme Court Justice. Therefore, this vacancy should not be filled until we have a new president.”

Obama had nominated Garland the March prior to 2016’s election, while Trump’s nomination of Coney Barrett was a mere 48 days before the 2020 election. However, Coney Barrett was granted a hearing and a vote by the Senate, despite the process followed with Obama only four years earlier. The Democratic Party held a talkathon protest against this hypocrisy of the Republican Party from Sunday, Oct. 25 into Oct. 26, immediately before the confirmation of Coney Barrett.

In addition to being an abuse of power, the confirmation of Coney Barrett is disrespectful of the wishes of the late Bader Ginsburg. According to her granddaughter, days before her death, she stated,  “My most fervent wish is that I will not be replaced until a new president is installed.” Bader Ginsburg opened many doors for women and other minority groups throughout her time on the bench, such as the inclusion of the protection of women in the Fourteenth Amendment’s Equal Protection Clause. After fighting for 20 years, Ginsburg also presented the court’s majority opinion in a case against the Virginia Military Institute when the court decided their admission of only men to be unconstitutional. She fought for the abolishment of the Nebraskan law  against “partial-birth” abortions. She also voted majority in Ledbetter v. Goodyear Tire in an effort to grant Lilly Ledbetter back pay for the loss in pay compared to her male counterparts over her years working. Bader Ginsburg opened several doors for women everywhere, including Coney Barrett, who now poses threat to these very victories.

There has been a major rise in concern about the possible overturning of Roe v. Wade, as the Supreme Court now holds a 6-3 split to the conservative wing, which will surely alter the court’s ideology for a generation. The threat to those who were born with the female reproductive system’s autonomy in regards to abortion, birth control and contraceptives is very real. The reversing of the of Roe v. Wade decision would allow for states to make abortion illegal and potentially some forms of contraceptives as well.

According to NBC, there is much dispute about when life begins, although many anti-abortion groups argue that it begins with fertilization. This could jeopardize any form of birth control that prevents the implantation of a fertilized egg, which includes IUDs and the morning-after pill.

Further, Coney Barrett’s confirmation poses a threat to millions of Americans’ healthcare. The Affordable Care Act, which was put in place by the Obama Administration, will be up for a hearing in November, soon after the election. As Coney Barrett represents another conservative justice on the court, it is possible that the act could be overturned. This poses a threat to 20 million Americans’ access to healthcare and health insurance. The law, which allows for young adults up to age 26 — including many students — to remain on their parents’ health insurance, would be in jeopardy, as well as protections for those with preexisting conditions. While it is unlikely that all portions of the Affordable Care Act will be overturned, the reversal of any part could still endanger many people’s access to affordable healthcare.

Disregarding my disagreement with Coney Barrett’s political stances, it is arguable that she doesn’t even hold the proper qualifications to sit on the highest court in the United States. Coney Barett has 15 years of teaching experience under her belt, as well as a short-lived term on an appellate court. According to the Northwest Progressive Institute, “She has never tried a case, never argued an appeal, never argued before the United States Supreme Court, and did not become a judge until 2017. Furthermore, she has very little experience handling criminal cases.” Whether or not you agree with Coney Barett’s potential threat to democratic ideals, it is clear that her qualifications are inadequate at best.

One of the most beautiful things about living in a democracy is that you have the ability to make a difference. I know that, for many of us, this situation with the court makes us feel powerless. Many of us may be personally affected by the consequences of Coney Barrett’s confirmation, but the positions of the Senate and Supreme Court are ultimately influenced by your opinions and your vote. While the Supreme Court is now a Republican majority, democrats have the chance to take back the Senate. If you haven’t yet, I encourage you to register to vote. If you missed the deadline in California, you may register at the polls on Nov. 3. Your vote matters. As many of us students have now risen to the age where we have the right to vote, it is important that we take that right and use it.

Sophia Lovell expresses her fear and disappointment in the appointment of Amy Coney Barrett.

I’m sorry I didn’t know we live in a monarchy or inherited aristocracy where a position in a republic should be influenced by the wish of its last holder. If that is the case why do we even have elections and appointments? Justice Ginsburg can feel what she wants(Or people say what she wants) the government does what it does.

You just argued against yourself, “where a position in a republic should be influenced by the wish of its last holder”. Case in point, Amy Barret was sworn in with the election being less than a week away, if Trump loses then doesn’t that mean that the position was “influenced by the wish of its last holder”? Logistically, it would make sense for the American people to vote for the president who would serve this next 4 year term, if Trump were to win great! We chose him, he gets to appoint the next scotus, however if Biden were to… Read more »

The American people elected Trump for four years and also elected a conservative senate majority for two years, not 3 years and 10 months and 1 year and 10 months.

Judge Ginsburg also said she doesn’t support expanding the court. Does that mean the progressive Dems are going to follow her wish and not expand the court? Of course not! In the eyes of progressive Dems, they are justified to do whatever they need to beget power because they are morally and ethically superior to the other side.