UC Santa Barbara students and organizers gathered in Isla Vista on Oct. 16 to rally student support for Proposition 16 which, if passed, would reinstate affirmative action in California. 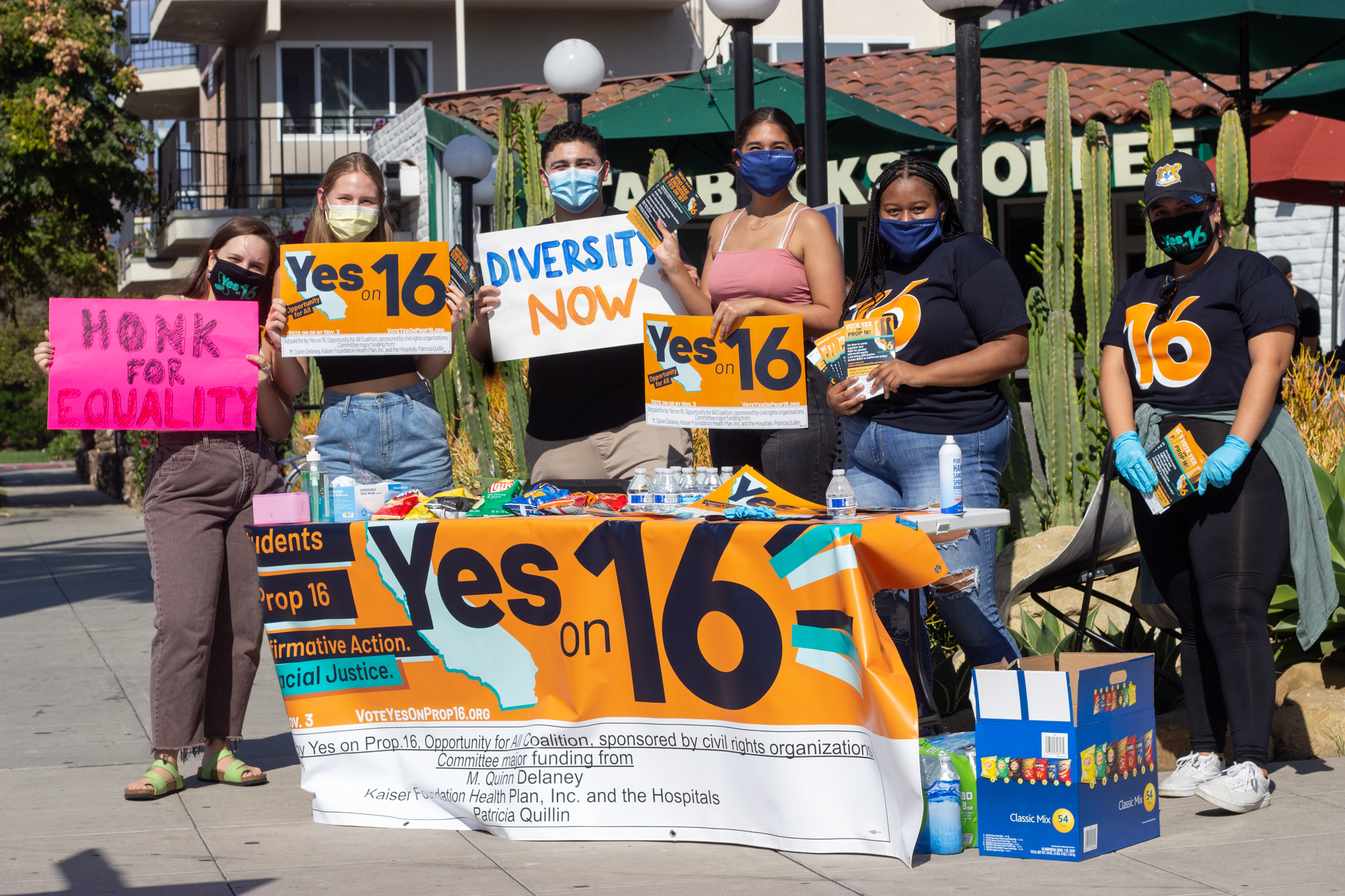 The rally, held at noon on the corner of Embarcadero del Norte and Pardall Road, was part of a statewide initiative titled “16 on 16.” Sophia Ramos / Daily Nexus

Proposition 16, one of 13 propositions on the Nov. 3 ballot in California, would repeal a proposition from 1996 that banned affirmative action in California. Opponents of affirmative action see the proposition as a way to legalize discrimination and preferential treatment based on race, sex, ethnicity and nationality, but supporters say that it equalizes opportunities for marginalized groups in school admissions, employment in the public sector and public contracting.

The rally, held at noon on the corner of Embarcadero del Norte and Pardall Road, was part of a statewide initiative titled “16 on 16” that included 16 rallies in various cities on Oct. 16, organized by the group Vote Yes on Prop 16.

Vote Yes on Prop 16 Organizer and former UC Los Angeles student Nazaret Nuñez, Associated Students (A.S.) President Daevionne Beasley and fourth-year political science and environmental studies double major and student organizer Ciara Thrower staffed the rally, along with other members of A.S. Staffers handed out flyers to passersby as they walked and skateboarded to the nearby businesses. Staffers also answered questions from the public about Proposition 16.

Nuñez said that as a first-generation Latina student, she didn’t feel as if she had programs to support her and wanted to change that for future students.

“The spaces at public institutions are not accessible, and that is what motivates me. I want to create a better space for others,” Nuñez said.

“We are out here because we want to repeal the ban on affirmative action that exists in California,” Nuñez said in an interview with the Nexus. “It is one of the easiest steps we can take to tackle gender and racial discrimination within education systems, the workplace and a lot of other public institutions.”

Nuñez got involved with Yes on Prop 16 through friends that she made as a student organizer during her time at UCLA.

Thrower said that she was inspired to get involved with Vote Yes on Prop 16 after seeing a lack of diversity at UCSB and across the UC system.

“If we bring affirmative action back to California, we could definitely see more diversity in the UC. UCSB specifically has a really low Black population, so being a Black student, it’s kind of hard being at a place where there’s not a lot of people that look like you,” Thrower said. “So, I just want to give that opportunity to other future students, to have an environment that they feel more comfortable in.

Prop 16 is a blank check for the government to do discrimination. I voted no.

Great article! Very well written. Thanks for sharing how important this proposition is!

Very clear and well-written. Excellent review of the issue.

Ms Thrower, Ms Nunez, and others just favour the admission of other people who look like them in place of those who look different, which is a pretty superficial approach to diversity. And did this rally invite any representation of students who were rejected by UC Santa Barbara, in spite of having superior academic qualifications to those of many of the students accepted, under the guise of “holistic admissions”, which has sanctioned covert affirmative action since the process was implemented by UC in 2006, regardless of state law as expressed by the will of the taxpayers who voted for the… Read more »