The Daily Nexus
Sign of the Times
Prop 22 and the Tech Industry’s Continued Exploitation of Gig Workers
October 13, 2020 at 9:00 am by Katie Caracciolo 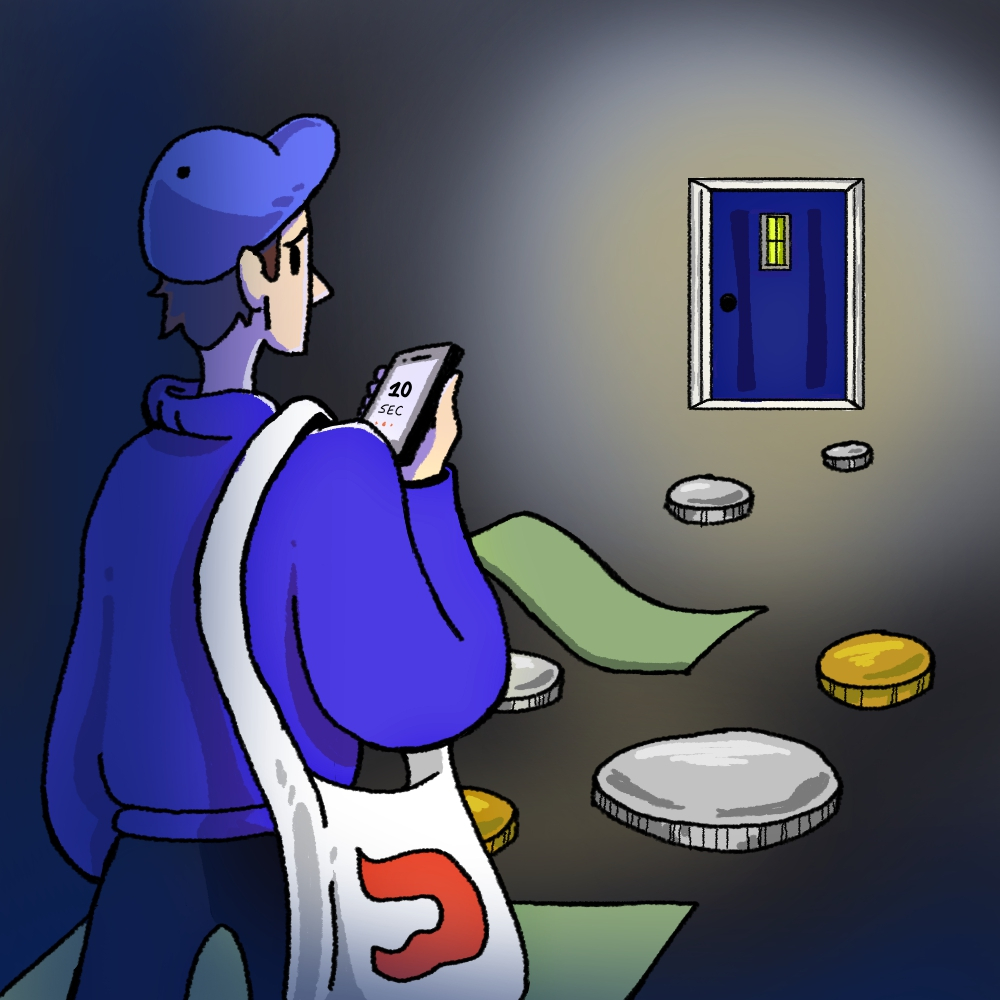 This past summer, amid quarantine shutdowns and a faltering job market, I joined hundreds of thousands of Californians in supplementing my income with app-based driving. Specifically, I signed up to be a delivery driver for DoorDash, an opportunity I was eager to take advantage of both for its flexibility and apparently undemanding work. I could earn money on my own schedule from the comfort of my own car, complete with my own playlists and podcasts. Best of all, it allowed me to make money without exposing myself to COVID-19 — pickups were quick and unfailingly masked, and most drop-offs were entirely contactless.

My excitement, however, quickly faded when I realized I was making far below minimum wage, often waiting up to an hour for a new order to come in, all while still paying for my own gas and vehicle insurance. If I experienced car trouble, a delay at a restaurant, a confusing dropoff or a dishonest customer submitting claims that I did not, in fact, hand-deliver them boba to their third floor office, I was subject to the whim of a faceless algorithm that treated me not as an employee or client, but simply a cog in the ever-growing machinery of app-based labor.

This all came to a head when I received an email from DoorDash asking for my support in the passing of Proposition 22, a California ballot measure that they claimed “is good for customers, good for restaurants, and good for Dashers” and would “protect the ability of app-based drivers to choose independent work.” As soon as I did some digging into the actual text of the bill, I first became skeptical, and then furious.

Prop 22 aims to “define app-based transportation (rideshare) and delivery drivers as independent contractors and adopt labor and wage policies specific to app-based drivers and companies.” While this may sound like a healthy compromise between progressive ideals, like a living wage and secure healthcare, and the budding online economy, it falls short of guaranteeing the benefits granted to “traditional” workers.

The partial benefits outlined in Prop 22 include “a net earnings floor based on 120% of the minimum wage applied to a driver’s engaged time and 30 cents, adjusted for inflation after 2021, per engaged mile” as well as partial healthcare subsidies and vehicle insurance if meeting certain minimums for “engaged time.”

Even on the surface, Prop 22 fails to address the longstanding problems that gig workers face. As stated in an article from The Verge, “Uber and Lyft drivers have long complained about poor pay, lack of protections, and an inability to unionize to collectively bargain with the companies. There have been stories about drivers sleeping in their cars because they can’t afford to live in the cities where they work, struggling to make ends meet, and feeling totally at the mercy of a faceless algorithm that dictates when and where they drive and for how long.” Prop 22 does not assuage these issues, and its meager offerings fall far short of guaranteeing a living wage and proper benefits to the lifeblood of these companies.

Essentially, as researchers with the Partnership for Working Families (PWF) and National Employment Law Project (NELP) wrote, “the benefits contained in the initiative pale in comparison to what workers are entitled to under state law.”

It is downright dishonest for rideshare companies to insist that this Proposition is in the best interest of California laborers when it is funded by the very corporations that exploit them on a daily basis. According to the ballotpedia article on the Bill, “DoorDash, Lyft, and Uber—each placed $30 million into campaign accounts.” This immense use of resources on funding the bill is immediately apparent, due to the fact that upon a simple Google search of “prop 22 california,” the top result is an ad for the “YES on 22” campaign.

It is downright dishonest for rideshare companies to insist that this Proposition is in the best interest of California laborers when it is funded by the very corporations that exploit them on a daily basis.

Perhaps if they spent resources on improving their business model rather than on funding predatory state bill measures, they wouldn’t be struggling to stay afloat.

Prop 22 represents simply another step in the battle between rideshare behemoths and the state of California over the classification of app-based workers. Last September, California lawmakers passed Assembly Bill 5 (AB 5), which defines “independent contractors” only as workers who are “free from the hiring company’s control and direction in the performance of work … doing work that is outside the company’s usual course of business … [and] engaged in an established trade, occupation, or business of the same nature as the work performed.” Under this three-factor test, rideshare drivers would certainly qualify as employees of companies like Uber, DoorDash and Lyft, whose whole business model is built around their labor.

However, rideshare companies, who misclassify their workers as independent contractors, have strongly resisted “[reclassifying workers] as employees instead of contractors,” arguing, in the words of Uber’s chief legal officer, “that drivers’ work is outside the usual course of [their] business, which is serving as a technology platform for several different types of digital marketplaces.” This ridiculous claim reveals the tech conglomerates’ unabashed resistance to following California labor law, a system from which they feel they are exempt. As Judge Ethan Schulman stated upon granting an injunction in favor of the state of California, “[Uber and Lyft’s classification of workers as independent contractors] flies in the face of economic reality and common sense … To state the obvious, drivers are central, not tangential, to Uber and Lyft’s entire ride-hailing business.”

We have already seen Uber and Lyft threaten to shut down business in California entirely if Prop 22 does not pass, rather than adjust their business model to correctly and legally classify their workers as employees. These companies are losing money anyway, so why not do it while treating workers like human beings? Jerome Gage, a Lyft driver who supports reclassification, points out the selfish nature of these threats when he states, “They’re playing with people’s lives threatening a shutdown … They treat us like it’s all about them and their bottom line.” Clearly, rideshare companies do not have drivers’ best interests at heart as they threaten to shut down business in California.

As Assemblywoman Lorena Gonzalez, the lead legislative sponsor of AB 5, responded on Twitter, “What if [Amazon] threatened to stop doing business in California if we didn’t allow them to pay their warehouse workers less than minimum wage & exempt them from paying unemployment, etc. What if it was your employer? That’s the precedent [Uber] is trying to create.”

The tech giants funding Prop 22 aim to maintain the status quo, for in the words of the President of Lyft, “We are focused on operating as we are.” For these companies to (correctly!) qualify their workers as employees, who are essential to business operations, they would have to completely restructure their business model, which may be costly to customers in the long run. True, app-based services like Uber and DoorDash as they are now have brought a new level of convenience and comfort to modern living, as well as “an accessible, low barrier-to-entry way [for drivers] to earn income,” but a business model that relies on exploiting workers should not be allowed to function undeterred.

The state of California has a responsibility to protect all its workers, not just those who participate in the “traditional” economy. As we’ve seen, tech companies will bend over backward to avoid offering their workers the proper protections guaranteed by state law. As voters, we have the power to insert order and justice into the expanding online economy, and as a disillusioned former DoorDash driver, I am begging you to do so.

Katie Caracciolo will be voting No on Prop 22 this November.

Yes on 22 – Uber, Lyft, Door Dash, etc. are not employers… they are an app that connects people (e.g. a driver with someone needing a ride). If 22 does not pass, simpletons do not understand the ramifications. If you want a job with benefits and social security, GET ONE. The costs of these services will increase astronomically if 22 does not pass. Protect the freedom of Gig economy workers.

I’m sick of this BS about “exploitation.” This is America – you’re free to do what you want… if you don’t like the pay that Uber, Door Dash, Grub Hub, etc., find a different line of work. A few people are bitching about not being classified as employees, which is ruining it for the tens of thousands of others who like working for the Gig economy. Disgusting.