On an early September morning, the sky above fourth-year voice performance major Megan Ashley’s home in Tollhouse, California was rendered a grayish haze after four days of raging fires in northern California. Heavy plumes of smoke and ash darkened the hills in Ashley’s hometown as the Creek Fire drove temperatures above 90 degrees in the middle of the night. Several days later, she was forced to evacuate her home. 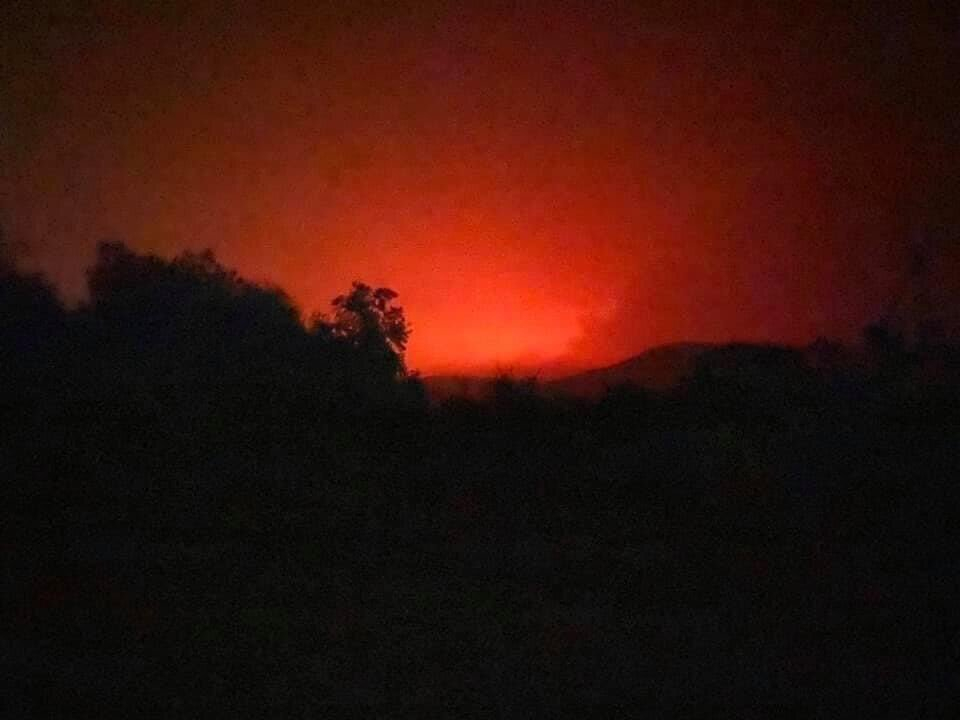 Heavy plumes of smoke and ash darkened the hills in Ashley’s hometown as the Creek Fire drove temperatures above 90 degrees in the middle of the night. Courtesy of Megan Ashley

This year, wildfires have burned a record of 4 millions acres across the golden state, twice as much compared to September, several of which forced the evacuation of UC Santa Barbara students from their hometowns and disrupted their day-to-day lives.

At 62% containment as of Oct. 4, the Creek Fire has displaced countless homes after flames have erupted near Big Creek and Huntington Lake in Fresno County.

Several of Ashley’s neighbors and community leaders blamed forest mismanagement, but she said she believes climate change played a bigger role in the fires’ destruction.

“I wish a lot of my members of my community feel the same way about climate change,” Ashley said. “They just think you need to log more trees but that’s specifically not the case … Wildfires are an essential part of the forest, but this forest shouldn’t have been allowed to get this bad.”

Amid natural disasters among the likes of the Creek Fire, Ashley said many communities have lost not only their properties but also the stories and memories embedded in their homes and neighboring buildings. For instance, Ashley recalls heading up to Cressman’s General Store — which was burned down in the Creek Fire — on her way home from high school to get cinnamon rolls.

“When you view a disaster through the news cameras, there’s always a degree of separation,” Ashley said. “It was different because I knew the people that were being affected.”

The closest wildfire to I.V. is the Bobcat Fire, which has burned over to 115,000 acres in the San Gabriel Mountains in Los Angeles as of Oct. 7, according to the Mercury News.

Maya Fuentes, a first-year history major at California State University Channel Islands, lives at the Storke Ranch apartments with her boyfriend Jordan Gray, a new transfer student at UCSB. After encountering the Thomas Fire in 2017, Fuentes said she can only imagine how other communities are dealing with wildfires threatening their homes all over again.

“It’s sad to see a lot of the beautiful nature and people’s homes being destroyed,” Fuentes said. “It’s really upsetting to have to see other people constantly pack up their homes in a couple hours and just hope for the best.”

In addition to the health risks of COVID-19, Gray added that the poor air quality poses an extra layer of burden for families who are already feeling the heat from wildfires.

“[For] a lot of us that are staying in our homes and families that are not really going out — besides going outside to the beach or on bike rides — the smoke and the ash really affected everyone because it kept everyone from going outside and doing the only things they could to really get out of their homes,” Gray said.

Poor air quality poses a health risk for those prone to asthma or lung complications, especially among children and the elderly populations, according to the Asthma and Allergy Foundation of America. Fuentes said she suffered from dry throat and nose whenever she went outside.

Despite her symptoms, Fuentes and Gray said they are grateful to have their homes intact and empathized with communities that were forced to evacuate their homes.

“We got really lucky by not having a fire here,” Gray said. “I feel like it’s almost every year we have a wildfire in Santa Barbara despite all of the precautions we take. We just feel really fortunate to have our homes still and have our families and not have to worry that we are going to lose our homes to a fire.”