For fifth-year computer science major Alex Funk, his venture into watercolor painting started as a discovered passion while he was a freshman living in Santa Cruz Hall. Now, inspired by the natural beauty of Santa Barbara and saddened by the onslaught of tragedies in recent months, Funk wants to help his community through his art. 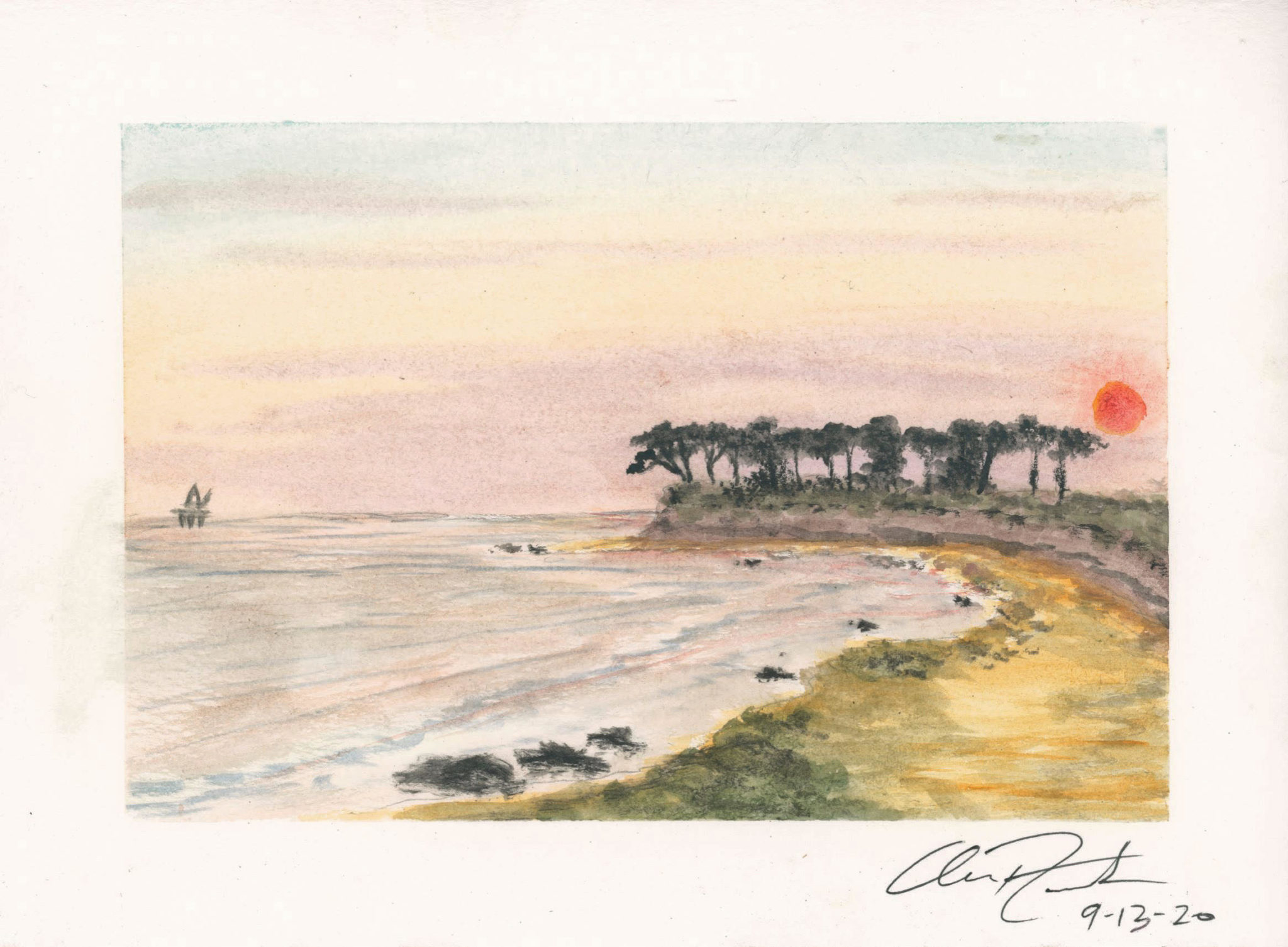 Funk began selling his paintings locally about six months ago, starting with I.V. Open Market and the UCSB Free & For Sale group on Facebook. There was enough demand for his work, he said, that he decided to set up a website where people could browse his art online. “So many people wanted to buy a painting that I had made, which was really humbling.”

Once he realized that he was bringing in more profit than expected, Funk was prompted to explore the various organizations that were looking for funding to help those in need.

“I felt like I should give back somehow. I wanted to figure out what cause I could raise money for that I felt was important right now. It was tough because there are so many important causes that need money to properly function.”

He ultimately chose the California Wildfire Relief Fund, a nonprofit that helps families affected by the wildfires with recovery and rebuilding efforts.

“I’ve been raising money for the Relief Fund for two and half weeks or so, and my primary avenue for finding customers is through Facebook and word of mouth,” Funk explained.

While Funk noted having very little artistic background, his love for the natural beauty of Santa Barbara was his motivation to continue painting. “I have gotten better bit by bit, and it’s amazing to look back at some of my older paintings and see how far I’ve come.”

When asked if there was any specific landscape that encouraged his art, Funk immediately mentioned the sunsets on the beaches of Isla Vista, which captivate the beachside community’s residents every evening.

“The sunsets in Santa Barbara are just so unbelievably pretty, unlike any other experience I’ve had. Sunsets happen every single day but there’s something very special about the ones that happen in Isla Vista. That’s really where it all began.”

One of Funk’s favorite spots to paint is on Devereux Beach, where he will arrive an hour or so before the sunset and sit on one of the benches along the bluffs. “When the painting is complete, it’s almost like a time lapse of the sunset, [with] each different stage of the sun setting — the sky turns pink, the water turns bright orange, the shadows vary, and the painting that comes out in the end is almost like a bit by bit version of the sunset.”

After he finishes a painting, Funk typically scans the canvas and does some digital work. He then takes the final depiction to a print shop and makes the piece available on his website. “When someone places an order, I print out a label, throw it in an envelope, write a thank you note and send it out,” Funk explained.

Funk’s preferred medium is watercolor painting, and he credits the ease of transporting and setting up the materials. “Watercolor is really the only way I’ve learned. I’ve always been kind of afraid of staining all of my clothes with oil or acrylics.”

Funk is grateful for all of the support he has received thus far, considering that he never felt like he was naturally gifted in art. “I’ve been humbled by how it’s transformed into something that other people appreciate.” He hopes to continue to be able to make a difference in his community with this creative outlet.

“I just want to make people happy and feel a reminder of the beauty of the natural world. I think that’s where the focus of future campaigns will go — funding ocean and wildlife preservation efforts. That’s the goal.”

http://www.artfunk.org
Thank you so much for the support. It means the world to me.
If you’d like to learn more, please check out the link above.