The Daily Nexus
Opinion
The Sands of Death: Why Beaches Should Be Closed
July 7, 2020 at 1:07 pm by Peter Figueira 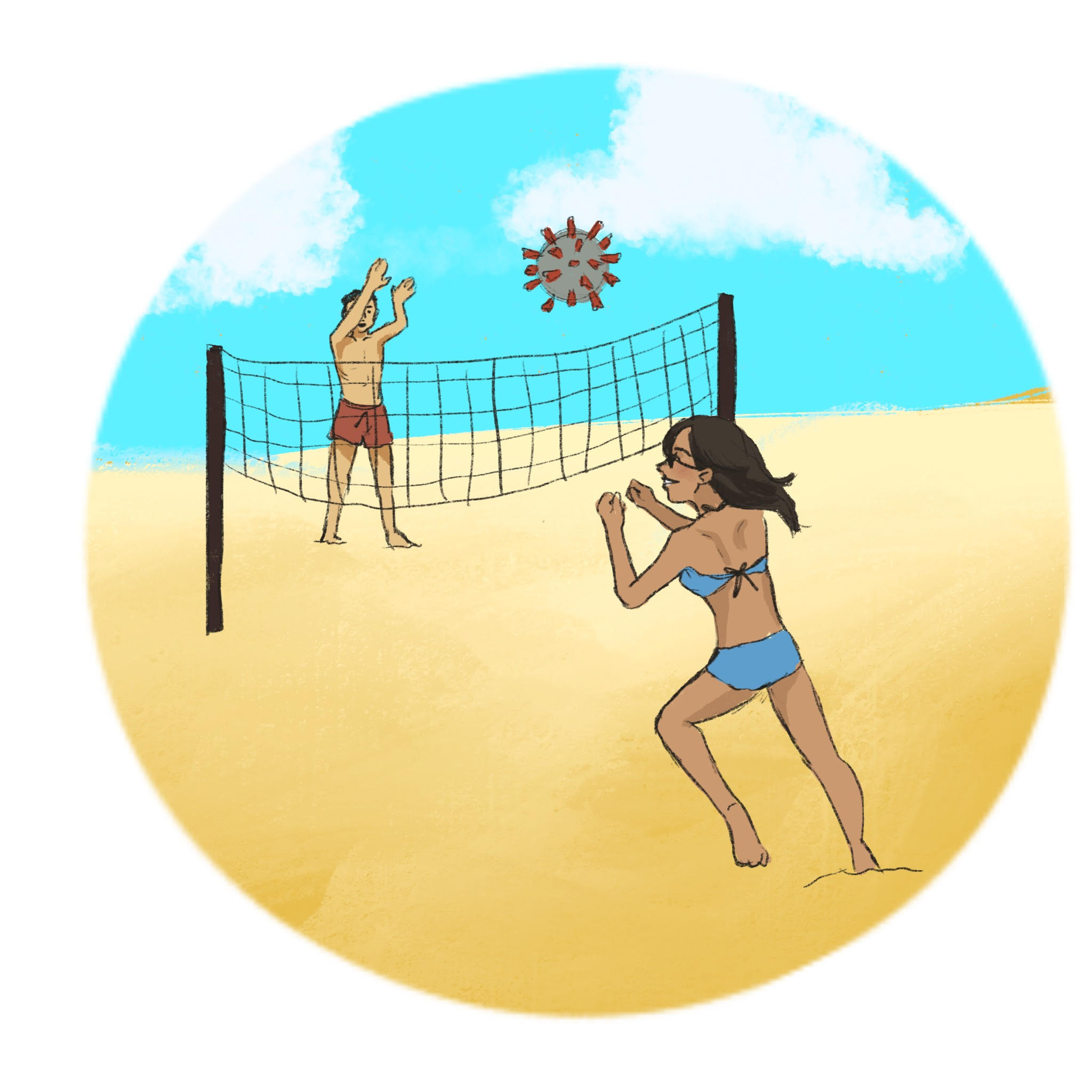 Yes, our beaches should be closed.

Yes, I know I’ll get some hate for saying so.

When the current pandemic forced Chancellor Henry T. Yang to end all in-person instruction, fear was wrought in everyone’s eyes as people began to realize that the coronavirus was no joke. Now, with about 45,324 new COVID-19 cases reported in our beautiful county on July 5, that fear has surprisingly receded, and a complete disregard for public health safety measures like social distancing has become ubiquitous.

Sure, many of the stores and student housing away from Del Playa have kept up with the re-opening standards. For instance, Costco requires face masks for all shoppers and San Joaquin Villages has converted one of their study rooms into a testing center. Yet, as you stray further from society above sea level and traverse closer to the beaches, the lack of care for the current pandemic becomes more apparent.

It was a Friday afternoon. I had just finished my last online assignment for the spring quarter and felt like going for a walk as a much-earned reward. So I asked my friend, who has also been social distancing in their apartment, if they wanted to tag along.

Garnishing our double-layered cloth masks, we set off for a stroll around Isla Vista.

The streets in our once lively town seemed barren. Every restaurant was lonely, lacking the youthful Gauchos that had once sat on the now caution tape-covered benches. Often, handmade signs in the windows of establishments emphasized the Centers for Disease Control and Prevention (CDC)’s “6-feet apart” guidelines for social distancing, and tape marks were spread uniformly on the floor to support the precaution. Some signs warned that service could be denied if a mask was not worn.

Despite many people being angry about the COVID-19 precautions, these safety measures are necessary. Yet many seem to have forgotten (or ignore) the need for such action.

Our walk continued to the legendary Del Playa Drive. To our surprise, the streets there looked as lively as ever. People who live on DP were still enjoying their time with their housemates despite the circumstances and, honestly, I was happy for them. That they could find joy amid a pandemic is a gift many are not able to acquire.

Almost all of the activity we saw on DP was enclosed in a home, contained within front yards with only handfuls of people suntanning or playing beer die. Assuming many were taking similar precautions seen throughout our county and town, we continued our walk to the beach. What my friend and I saw, though, changed our perspective on those around us.

Huge groups of people laughing and playing. Volleyball games with way more than six on a team, beer die ON the beach, groups of drunk people coming in and out of the beach entrance, waves crowded with surfers — but specifically not a single face mask in sight.

My friend and I stood out like sore thumbs, staring in shock with our mouth covers at the astonishing number of people on the beach. At first, the sight seemed like a mirage of the past, before a virus began blanketing the nation. But no, this was real.

Despite a statewide order telling people to stay at home in an attempt to slow the spread of COVID-19, I quickly realized that many people are not taking the governor’s mandate seriously; some seem not to be taking the pandemic seriously in general.

Then I realized that those on our beach are not the only ones being careless. All over California, people have been storming the sun-covered sands, putting hundreds if not thousands of people at risk. When I went on that walk, I genuinely believed the crowded beaches would soon bite us in the ass, and it’s incredibly apparent how accurate that belief was when looking at the current rates of infection in states like Florida, Arizona and California.

I know what people are going to say: “Oh, but I’m young! Oh, but I’m not going to let a virus dictate the way I live my life! Oh, but what about herd immunity?! Oh, but who the heck are you anyway?!”

Well, here are some answers to such comments.

According to a study posted in a peer-reviewed journal titled “Strong Social Distancing Measures In The United States Reduced The COVID-19 Growth Rate,” areas that have not been maintaining social distancing policies yield significantly greater risks for infection, with a 35 times increased chance of COVID-19 spread than those areas taking precautions. Yet many on the beaches near Del Playa are acting as if they’re outliers to the facts.

I realized that those on our beach are not the only ones being careless. All over California, people have been storming the sun-covered sands, putting hundreds if not thousands of people at risk.

And yes, you’re young, but that doesn’t mean you’re untouchable. The CDC has updates on COVID-19 cases in the U.S. daily. As of May 18, 2020, there were 80,000 infected in California, with more than 3,200 dead. Now, just two months after the premature reopening, there are over 260,000 infected in our state alone and 33% of all cases are between the ages of 18-34. With such a statistic and the clear lack of distancing many young people have shown on the beaches, it makes me wonder what’s going to happen when individuals start heading home to their older, more susceptible parents and family.

Let me give you a scenario. According to CDPH’s website which provides statistics daily on the current pandemic, only 1% of those infected between the ages of 18-34 die. So, let us say that most of I.V. gets infected for not giving a fuck about what is happening but aren’t showing symptoms so they don’t care — that’s about 27,000 people. Now, let us take the previous percentage of those within the aforementioned age group in California, 33%, and apply it to I.V. 33% of IV is 8,910 infected. Now, if the statistics are correct (1% of the infected would die assuming they are 18-34), that means that 89 people, who maybe you know or don’t know, would probably die. That’s an entire backyard on DP filled with corpses.

And sure, living your life your way, without letting anyone or anything stop you (let alone the first pandemic known to be caused by a new coronavirus) might sound like a noble cause, but I hate to break it to you — you sound selfish. You’re not untouchable. There are people around you who are more vulnerable, and the older they are, the less their body can fight off the virus. So your “self-righteous” cause of being “free spirited” or “unchained” or “the gatekeeper of your destiny” is selfish, and quite frankly, you’re putting other people’s “destiny” in your hands. Kinda hypocritical, don’t you think?

Now, on the topic of herd immunity. For some odd reason, the argument on achieving herd immunity is circulating throughout the internet. Many I have talked to oddly state that going out and exposing themselves to the virus will contribute to herd immunity and, therefore, be helpful in the long run.

Herd immunity is ideal but, by definition, not a preventable measure without a vaccine. Herd immunity, also known as “community immunity,” only works well if most people in the population are vaccinated or immune. Also, this all depends on the type of disease.

With measles, around 19 out of every 20 people (about 95%) need to have immunity/be vaccinated in order to stop it from spreading completely to those who are not vaccinated. That’s known as the herd immunity threshold for measles. Fortunately, COVID-19 is much less infectious than measles and therefore requires less infected people to reach herd immunity (about 70%). However, therein lies the issue.

Since 70% need to be infected though there is no available vaccine, by definition, it is the opposite of prevention. Why? Because 70% are just simply sick and dying! Plus, the chance that only young people are that 70% and are also immune is ludicrous. If that were the case, then there would quite literally be a large population of nonimmune older people who would constantly risk their lives just by going outside.

Furthermore, let’s say that this route of community immunity starts snowballing. The consequences would be catastrophic. The crude mortality rate for COVID-19 is around 3-4% (in the U.S., it is about 6%). Therefore, if 70% get infected to reach herd immunity without a vaccine, we would see millions upon millions upon millions of deaths.

On top of that, hospitals would become even more overwhelmed, and the above statistics would become significantly worse due to the lack of treatment.

Look, I’m not saying that herd immunity is out of the picture. I think someday it’ll be possible. But to use that as an excuse to head out to crowded beaches and ignore the CDC’s and the governor’s social distancing orders is unrealistic.

The fact is, for COVID-19 to go away, we need a vaccine and to suggest herd immunity as a preventative measure without one is just dumb.

A month or two from now, when young people who frolicked carelessly on the beach with their large group of friends go home, when suddenly there are hot spots in their hometown and people near and dear are suddenly getting sick, I hope nobody acts surprised and that people start taking notice of the truth.

Until then, there are plenty of safety measures to help prevent the spread of the current pandemic. Yeah, it’s going to suck being locked inside for long periods of time during the summer, but in the long run, we will save lives.

We cannot let ourselves become victims of our own ignorance. Unless hardcore safety measures are put in place to prevent the immense crowds I saw on our beaches, then closing them is the right thing to do to save lives.

Peter Figueira believes closing the beaches in Isla Vista will save lives.

Research herd immunity. Masks and shutdown laws do not halt the spread of the virus, they only slow it, making it harder to reach immunity.

Let’s be serious. After the “authorities” gave a pass to “protesters” doing their thing sans masks or distancing, but harassed innocent people only wanting to go to church and worship, they lost ALL credibility. So if you want to go to the beach, why not? We can’t believe or trust what “they” say.