The Daily Nexus
News
From Four Members to First Place: The Trajectory of UCSB Taara Dance Group
July 3, 2020 at 9:00 am by Sofía Mejías-Pascoe

Huddled together in the corner of the stage at Wilshire Ebell Theatre in Los Angeles, the 12 UC Santa Barbara Taara dancers peeked over each other’s heads, wobbling side to side to catch a glimpse of center stage. 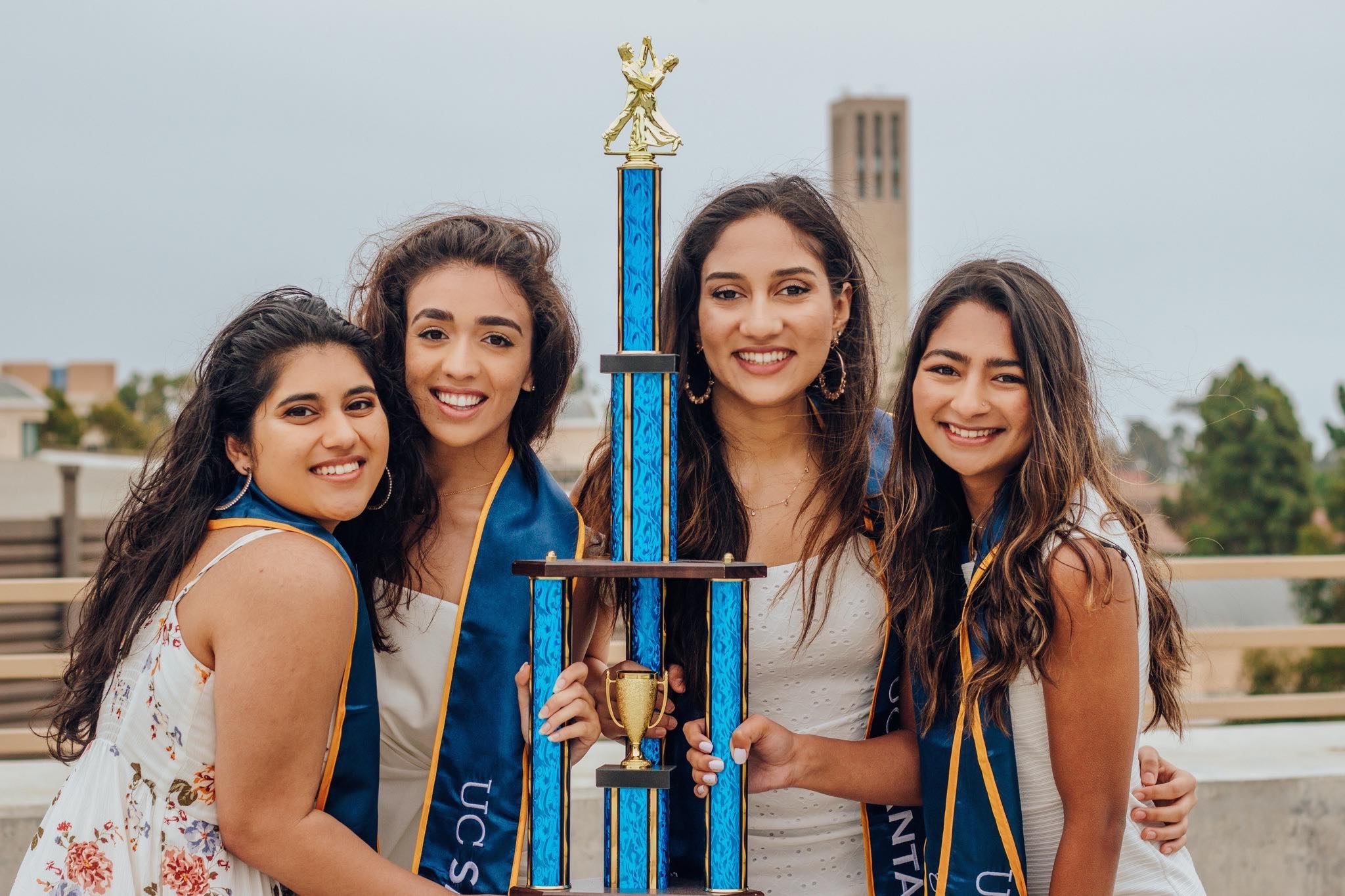 The judges of the 2019 UC Los Angeles Bollywood Fusion dance competition Jhoomti Shaam were about to announce the winners of that year’s competition. But the women of UCSB Taara — a dance team performing South Asian dance styles — had already decided they wouldn’t place at the competition.

“There were so many amazing teams and we had accepted it. We were like, ‘You know what, we’re going to get last. And that’s okay,’” Natasha Nema, one of the group’s four founding members, said. “We were genuinely fine with getting last because we just couldn’t even believe that we were there in the first place against that many amazing teams.”

The group had been together for less than a year, and after scoping out the competition, they thought they didn’t stand a chance.

Then the judges announced the winners –– they placed third.

“We didn’t even comprehend that our name was being spoken, that we just paused for a little bit. And then we screamed, it was like two seconds later,” she said.

In less than a year since the group’s inception in June 2018, the four hopeful members became a winning team of 12 in their dream competition. That was in March 2019.

This June, the four original members of UCSB Taara –– Nema, Shivani Shah, Sejal Chandra and Jashanna Walia –– graduated from UCSB and said goodbye to the group they envisioned, nurtured and led to victory over two years. For those four women, leaving Taara “Gen One,” or what they call the first generation of UCSB Taara dancers, meant leaving a lasting legacy at UCSB.

“To have our literal legacy on this campus and a part of us still at UCSB forever, I think, to me at least, is really, really special. It’s like a home you’ll always have when you visit campus and a bond you’ll always be a part of, no matter how old you get,” Shah said.

Nema, Shah, Chandra and Walia recently passed the baton to a new generation of dancers, but they expect to watch the group progress for years to come.

Beginning in the summer of 2018, the girls buckled down in brand building and recruiting efforts. They decided on their official name –– Taara, which means star in Hindi –– designed a logo, ordered team jerseys and hired a DJ to create a dance mix for their group.

Nema handled the marketing side, which meant legitimizing the team, recruiting new members and defining their style.

“We really wanted for people to take us seriously within the circuit because there were already so many amazing teams.”

Before creating Taara, Nema, Shah, Chandra and Walia were all in other Bollywood or Bhangra dance groups at UCSB but had frustrations with the groups’ leadership. So the four decided to create their own group: a competitive, all-female team that fused the styles of Bollywood, Bhangra, hip-hop and more.

But starting a new group meant that Taara didn’t have a proven reputation to help recruit dancers. New members would have to take a leap of faith, and the original four had to convince recruits  that Taara could go the distance.

Nema took to social media, scouring Facebook pages for incoming freshmen and potential recruits, and even went as far as downloading dating apps. Some of the others made friends with dancers already in the competition circuit, Desi Dance Network, to learn insider tips.

At tryouts later that year, Taara accepted 12 new members, bringing the team to 18. But that number was quick to dwindle.

By the time their first competition came around, their group was down to a solid 13 members, just one member more than the minimum required to compete.

That year, UCSB Taara competed in back-to-back competitions for three straight weekends. After the first competition, one teammate dropped out on the drive back to UCSB. Now, they were down to 12, and the team had to rearrange dance formations for the next two weekends of competition.

The founders said that competition season was grueling for the team. Between balancing school schedules with dance practice, the four struggled to keep the team motivated.

Taara didn’t have its own designated space to practice on campus, so the captains had to get creative in finding a space to dance.

At the next weekend’s competition, Taara placed eighth –– last place. The girls used the week between that competition and their next to rearrange parts of their performance with feedback from the judges. At the last competition that season –– Jhoomti Shaam –– Taara placed third.

“Winning that, not only was it just amazing because it was our dream competition, but I think it finally showed the team that everything we did was for a reason,” Shah said.

The team knew at that moment, claiming their trophy, that the tireless hours of practice, sleepless nights and long drives to competitions had paid off. For a team that wasn’t expecting to place at all, taking home third place was more than a victory — it was proof that Taara lived up to its name.

While a new generation of Taara prepares to take the reign, Nema, Shah, Chandra and Walia agree that Gen One created a precedent –– and a bond –– that will live on.

“Gen One, especially, everyone just grew so close and over everything, it was just a family. I think even leaving it, I know that everyone’s still going to be a team forever, as cheesy as it sounds,” Walia said.

It was no accident that Taara Gen One became a family since it was one of the group’s first goals when they set out to create Taara. They wanted to compete and impress, but mostly, they wanted to dance with people they loved.

“We were 12 small girls, but we were the loudest girls in every room and we were just having the best time. And I think that like, like positive energy really just attracted others to us,” Shah said.

“Taara isn’t just a dance team. We’re also people, we’re good people. We want people to know that we’re friendly people and that is part of why we dance. It makes us happy. We want to share that happiness.”