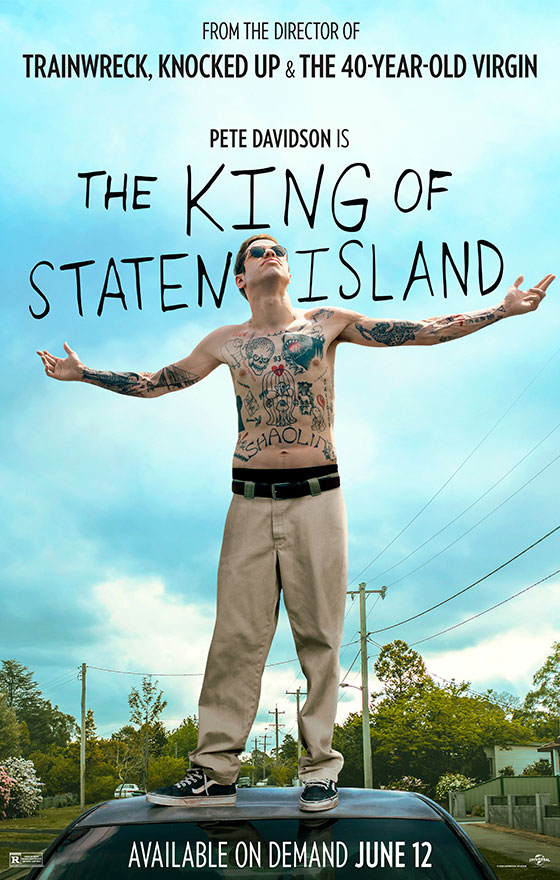 Judd Apatow has long found his niche in Hollywood with films that drive their lovable yet woefully aimless protagonists to take a hard look in the mirror, with a dramatic transformation often materializing right before they hit rock bottom. With his latest comedic venture, “The King of Staten Island,” the director trades in his signature smutty jokes and raunchy shticks (think “Knocked Up” or “The 40-Year-Old Virgin”) for a more down-to-earth approach to themes of grief, ambition and self-worth.

This film is a clear departure from what audiences have come to associate with Apatow, as he taps Saturday Night Live’s Pete Davidson for a loosely based retelling of the stand-up comedian’s upbringing in the New York City borough of Staten Island. If you’re watching the movie as an invested fan of Davidson’s or are committed to watching any and all Apatow films, the 137-minute runtime may not be a big deal. When the dust settles, however, “The King of Staten Island” amounts to more or less what you would expect from an Apatow-Davidson collaboration: a subliminally funny yet at-times sluggish plot that milks Davidson’s life story for all it is worth.

Davidson stars as Scott Carlin, a 24-year-old high school dropout who lives at home in Staten Island with his widowed mother Margie (Marisa Tomei), and his younger sister Claire (Maude Apatow), who is about to leave for college. Scott, who has never fully recovered from the sudden death of his father when he was seven, openly embraces his miserable existence and tendency to inflict pain on himself as he proceeds to wreck every personal relationship in his life.

Scott’s unresolved sense of loss surrounding his father’s passing, a fireman who was killed in a hotel fire, draws from Davidson’s own experience losing his father, a fireman who perished in the 9/11 terrorist attacks. For the past 17 years, Scott’s life has effectively been paralyzed, which he is acutely aware of yet comfortable ignoring. He passes the time  — perpetually high — by lazing around with his friends and hooking up with a girl named Kelsey (Bel Powley), who desperately wants to take their relationship to the next level while Scott is determined to keep things the same. His one and only aspiration is to open a restaurant which doubles as a tattoo parlor, to be named “Ruby Tattoos-days.” (With ink covering pretty much every inch of his body from the neck down, Scott claims that the pain of the needle relaxes him.)

When his mother starts to date another fireman named Ray Bishop (Bill Burr), who is incidentally the father of a little boy who Scott tries to tattoo in a park, Scott sees this as the ultimate act of betrayal against his deceased father and does everything in his power to break up the two. His mother, who finally wakes up to the fact that her son is a grown man who has been coddled for far too long, kicks Scott out of the house until he is better equipped to deal with his problems. Scott finds refuge in an unlikely place: the firehouse where Ray works, where Scott learns more about his father and about sustaining the relationships that matter to him.

In true Davidson fashion, “The King of Staten Island” tackles Scott’s serious underlying issues with abrasive sarcasm and laugh-out-loud one-liners, and it is his charming knack for self-deprecation that makes the largely forced writing bearable. Not forced, however, is Davidson’s acting — a pleasant surprise considering the number of comedians-turned-actors who have delivered lackluster performances over the years. Scott’s awkwardly dark humor and goofy facial expressions are so reminiscent of Davidson’s real-life persona that it is easy to forget that a camera is not just following him around as he meanders through Staten Island.

While the storyline is simply not gripping enough to justify its lengthy runtime, the film genuinely translates as an inside look into Scott’s muddled, THC-infused mind, as well as into the forgotten borough which shaped Davidson/Scott into the man he is today. The casting seems a little uninspired — Marisa Tomei in yet another mom role and Steve Buscemi makes a gratuitous appearance — but they serve their purpose as prop characters while Davidson takes center stage.

If you stick it out to the end, you may be wondering why this film came to fruition at all, since there is nothing that Davidson hasn’t addressed in his stand-up a million times already. Apatow, who has struck comedic gold with films that our generation will talk about for years to come, undoubtedly fell flat with this one. Some may find Scott’s childlike temperament to be too much, in which case there is nothing here for them. If, however, you find Scott to be incomprehensibly endearing, like me, you just can’t help but root for him.