The Daily Nexus
Society & Psychology
The Economics of the COVID-19 Crisis with Peter Rupert
May 18, 2020 at 7:00 pm by Anna Basa

In a shared effort, UCSB’s interdisciplinary research centers, Novim and Cottage Health have begun a lecture series, “Issues, Approaches, and Consequences of the COVID-19 Crisis,” to offer insights into the scope of the virus’s impact in various fields of study. The sessions convene on Tuesdays from 1 to 2 p.m. via Zoom and extend until June 9. 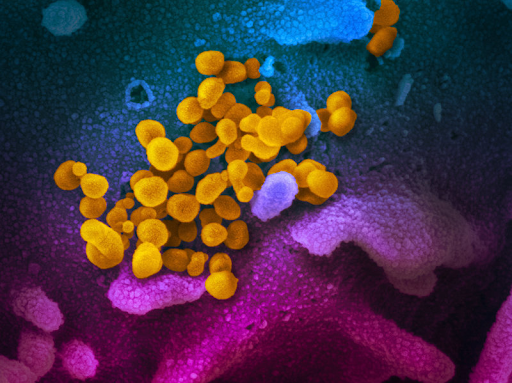 SARS-CoV-2 (yellow) emerges from the surface of cultivated cells. Courtesy of NIAID-RML

Rupert began the seminar by citing an article from The Wall Street Journal, speaking to humanity’s collective lapse of memory of past pandemics. “The Hong Kong virus killed over 100,000 people and more than a million in the world,” Rupert said, explaining that there was no sense of urgency to take proper precautions back then.

“[There were] people attending Woodstock in 1969, there was no shutdown and the pandemic lasted about three years; one of the things to note is how these things can respread.”

In highlighting a history of neglect in pandemic responses, he brought to light how the current COVID-19 crisis is no different.

Pointing to contrasting mortality rates from Anthony Fauci, director of the National Institute of Allergy and Infectious Diseases, and Jay Bhattacharya, a lead researcher in vital COVID-19 studies being done in Santa Clara and Los Angeles Counties, Rupert said, “I want to caution us all, at the end of the day we know very little [about the science behind COVID-19] and we certainly don’t understand much of the economics.”

Presenting two projections from early March, Rupert reported that, according to the Economic Policy Institute (EPI), Americans would lose 19.8 million jobs by the end of June 2020. In contrast, the Federal Reserve Bank of St. Louis believed that there would be 47 million jobs lost. This projected range of unemployment, according to Rupert, averages to somewhere between 10 to 40% — not sufficient to predict the future of the economy.

The shockwaves of this virus have indubitably illuminated the ill-preparedness of the U.S. to respond to pandemic crises.

Offering his expertise and calculations from his most recent paper, he later explained, “When we simulate the model to U.S. data, if there is no government intervention, total unemployment rises to 10% to 35% with quarantine.”

Compartmental epidemiological standards like the S.I.R. model provide a foundation for virologists to better track and structure the progression of pandemics. This mathematical bookkeeping of people is an arrangement which categorizes people as susceptible (S), infected (I) or recovered (R), and functions to show the spread of a disease. To translate this information properly into economic terms, Rupert introduced the Mortensen-Pissarides model for unemployment to the S.I.R. model for infectious diseases to estimate the effects of COVID-19 on the labor force in his most recent research.

His calculations indicate that “quarantining works, but we can do better if we somehow impose a tax on the infection and consider it a negative externality. We are thinking of taxing businesses on vacancy creation to stop businesses from hiring people [and furthering the spreading of the disease]. Incentivize businesses to stay home and make money.” More literature related to this can be found under the research tab on his website.

The state of emergency initiated by the crisis has left grocery store shelves barren of goods like flour, yeast and toilet paper. Encompassing the dire state of the American economy, essential goods are running low and people are increasingly becoming unemployed. He revealed that, in March, 3.3 million people applied for unemployment insurance. “[The amount of people applying for initial claims] are going up by the millions and we are now up to 26 million people.” This has already surpassed the projections of the EPI as we creep up toward the projections from the Federal Reserve Bank of St. Louis. 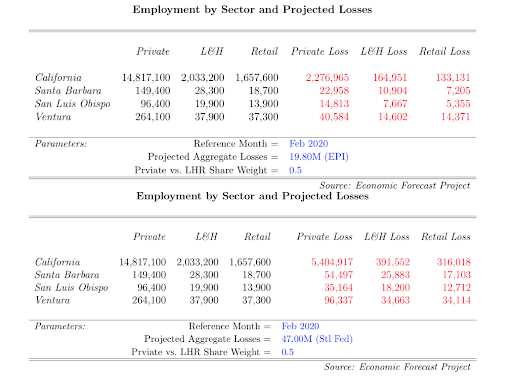 With quarantine forcing many businesses to close temporarily, many cannot sustain themselves with no customers for prolonged periods of time. As a result, Rupert exclaimed, “A third of all businesses will close. In fact, many local restaurants on State Street in downtown Santa Barbara will likely close if this quarantine continues until the end of the summer.”

During times like these, it is easy to underestimate the implications of figures on a screen. But, as more problems manifest as a result of the pandemic, people are losing not only their lives but also their means to live. During a later interview with the Daily Nexus, Rupert explained, “The disease has preyed on the most vulnerable and has always posed a predatory position to those who are immunosuppressed. But, it also targets those who are most financially vulnerable.”

He continued, “40% of women with children under 12 are facing food insecurity” and “all the people who were making lower wages are increasingly losing their jobs, causing the average wage of the working class to go up.” These statistics are just a few among the many that indicate harsher ends as the virus spreads.

There can be no resolve to the financial collateral of quarantine without obtaining information about where the virus is spreading and what the rate of infection is moving toward. Without this knowledge, humanity is playing a guessing game. As a remedy to diminish the scourge of the virus, a crucial step in all of this is to get adequate testing. Rupert emphasized that “solving the first problem to this virus remains a common ground in medicine and economics. We need testing.”

This virus is testing the tact of humanity and our institutions, and without proper attention to its demands, we risk lethal economic and medical consequences.