For many UC Santa Barbara students, returning for fall quarter elicits a certain nostalgia for college life at the beachside campus: the bikes whizzing through Pardall Tunnel; the squeak of lecture hall chairs and pull-out desks; the chatter and laughter of pocket-sized groups at Sands Beach, friends meeting again for the first time since summer break. 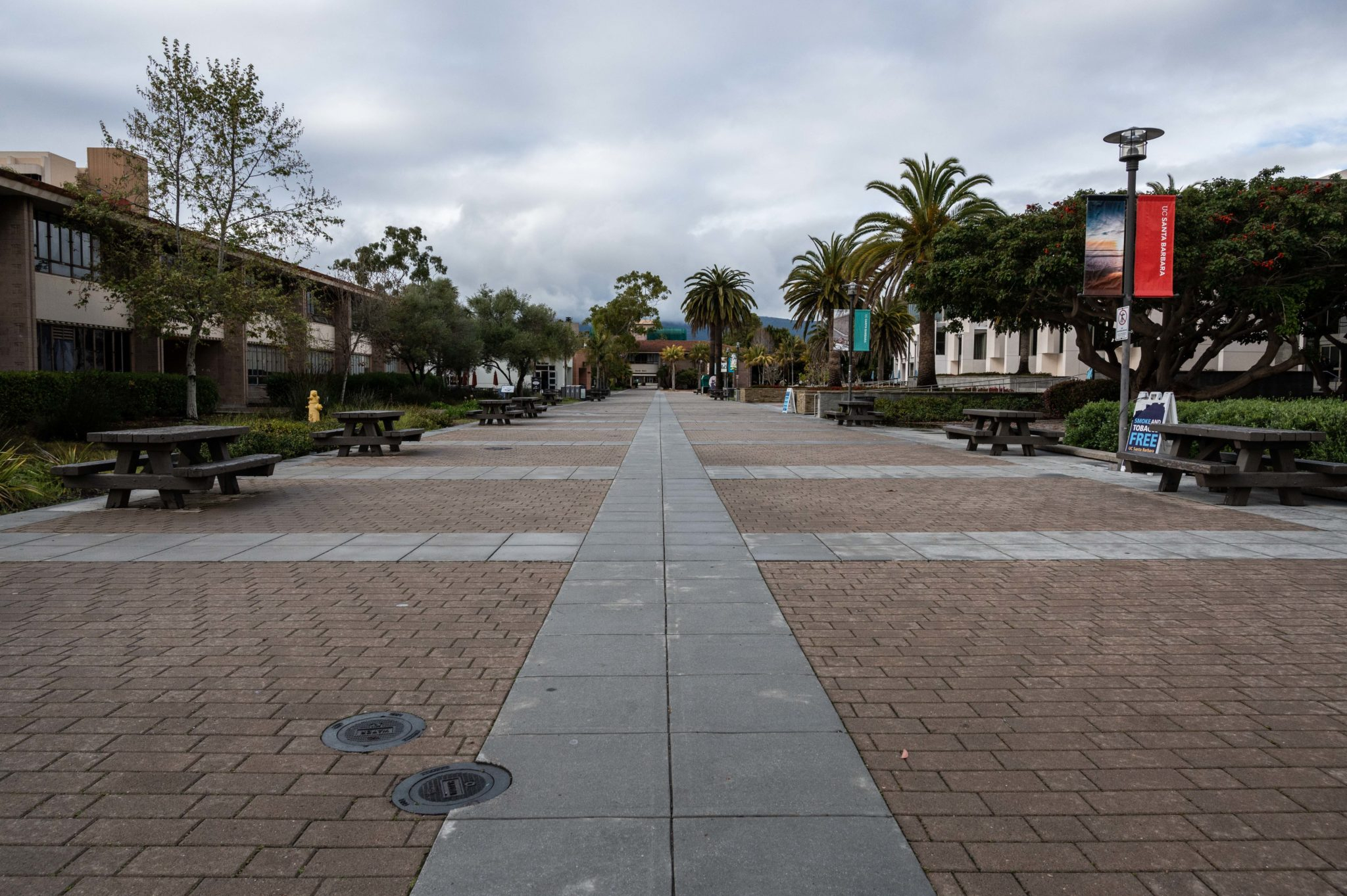 The campus has been empty since in-person classes were canceled in March. Max Abrams / Daily Nexus

With the recent announcement from UCSB administration that all summer sessions will now be conducted online, students are wondering about the fate of an in-person fall quarter, as the start date in late September inches closer. The university, however, has yet to make an official decision about the status of fall quarter instruction.

“I don’t think it’s out of the question,” Ali Javanbakht, interim Student Health service executive director and medical director, said in an interview. He’s been participating in almost-daily phone calls led by Chancellor Henry T. Yang, in which leaders from UCSB groups give updates and discuss the future of in-person instruction at UCSB.

“I think the general consensus is it’s not gonna be 100% in-person again. I don’t think anybody thinks that would be wise,” Javanbakht said.

“But I don’t think that anybody thinks that having a completely remote fall quarter would be reasonable either. Most people are feeling like it would have to be some kind of in-between,” he added. “Some kind of hybrid.”

The idea behind a hybrid-instruction quarter is to disrupt the transmission of coronavirus by reducing the opportunity for it to spread from person-to-person in close-contact environments like classrooms. Campbell Hall’s 900-person lectures and sections with students sitting desk-to-desk could be a thing of the past, at least for now, Javanbahkt said.

Yang’s COVID-19 Response Working Group, which includes leaders from all corners of the campus from Housing, Dining & Auxiliary Enterprises to the Academic Senate, is discussing ideas for new course structures and campus practices such as having in-person classes with smaller groups, face mask distribution to all students and faculty and single rooms for students living on campus.

“The steps need to be in place to limit how many times [and] how often different students congregate,” Javanbakht said.

For hybrid classes, this could mean placing students in alternating groups for each course that switch between in-person instruction one day and remote instruction the next day, so that if a person in one class group gets sick, the virus would have less opportunity to spread to more people, Javanbakht said.

The use of face masks could also become a widespread practice on campus, as the working group is considering making them available to everyone who uses campus facilities. Implementing widespread use of face masks entails creating “the culture and the awareness” to encourage young people and students to use them, Javanbakht said.

For housing, UCSB is considering allowing only singles or doubles in its campus dorms and residence halls. However, there’s concern among the working group that there aren’t enough rooms available for this change, a problem that could potentially “push more people into Isla Vista, a place that we don’t have control over,” and where the spread of the virus could go unchecked, Javanbakht said.

Javanbakht said I.V.’s unique population of UCSB students, Santa Barbara City College students, working adults and families means the path to testing must be pursued collaboratively by both the university and the county.

“[The university] can certainly offer services and testing and give them to UCSB students in Isla Vista but that’s about half the Isla Vista population,” Javanbakht said.

Most scientists agree that the path to normal life starts with widespread community testing, but Santa Barbara County’s testing capacity has not extended beyond those who display symptoms or are at a high risk. Three new community testing sites opened up in the county on May 5 in Santa Maria, Lompoc and Santa Barbara. Everyone is eligible for testing, but essential workers, members of the high-risk population and those exhibiting symptoms are being prioritized.

The county confirmed Isla Vista’s first case of coronavirus on March 30. Five weeks later, it remains I.V.’s only confirmed case. While other communities in the county have seen a rising  number of cases, I.V.’s count has been stagnant for over a month.

As of May 7, UCSB Student Health has administered 103 coronavirus tests; 102 tested negative and one was still pending at the time, according to Javanbakht.

Currently, UCSB Student Health has had to be “judicious” with its testing, Javanbakht said, since coronavirus tests are expensive — $60 per person — and in high demand and low supply. But testing needs to be expanded in order to get a sense of what the coronavirus spread looks like in the community, and as of now, Student Health services “is not set up to do that,” Javanbakht added.

“If we’re talking about broad big scale testing … to pave a path forward to resuming operations, that’s a very different scale,” Javanbakht said. “[We] don’t have the resources to do that. That’s more of a campus-wide level of operation that would need to happen.”

The Isla Vista Neighborhood Clinic has administered 14 coronavirus tests in I.V. as of May 7, but none have come back positive, according to Charles Fenzi, the chief executive officer and chief medical officer at the clinic. The clinic normally serves around 5,000 people, a number that usually goes down in the summer when students flock back to their hometowns, Fenzi said.

It is possible that I.V. is not seeing dramatic increases in coronavirus cases due to students returning home amid the move to online instruction, according to Fenzi. When students return, however, he said that the campus will likely need to look much different than normal.

“There’s gonna be a real push if we allow people back on campus to [return] in a way that is safe for everybody so the social distancing thing is going to be a fact of life for a long time,” Fenzi said.

Spencer Brandt, president of the Isla Vista Community Services District (I.V. CSD), said overcrowding of residents in I.V. is a complicating factor in slowing the spread of coronavirus and one that will make the university’s decision on housing more difficult.

Brandt is working with I.V. CSD General Manager Jonathan Abboud and the county on a reopening planning group to draft guidelines and practices for the reopening of the economy and the education sectors in I.V., including Isla Vista Elementary.

Though the county’s goal is to increase testing, Brandt said “it’s a slow process.” The three new testing sites have brought the county up to about 200 tests per day since they opened, Brandt said.

Brandt said he believes “many people in Isla Vista have been infected with COVID-19 but we either did not have the test at the time or they were just not prioritized for the testing.”

While communities across California begin tiptoeing into the reopening process, the picture of the coronavirus spread in I.V. remains murky. Javanbakht said the single case of coronavirus confirmed in I.V. since March 30 could mean “we just don’t have that many [cases] on campus or in Isla Vista” or “that we just haven’t tested the right people.”

But the reality of the coronavirus spread in I.V. could have huge implications in the future for Isla Vistans and UCSB students, Javanbakht said.

“If you take a community and you test them and the positive rates are really low, is it because COVID hasn’t come there at all? Or is it because it came and spread and it went,” Javanbakht said, “and those are very different dynamics.”