The Daily Nexus
Science & Tech
Assessing Sand Demand for a Low-Carbon Transition in Infrastructure
May 1, 2020 at 8:00 am by Anna Basa

The transition to low-carbon infrastructure aims to provide a resolution to the ills of climate change, which necessitates alternatives to current insufficiencies within the industry to reduce greenhouse gas emissions. While this movement toward sustainability can be desirable, opting for natural sand does not exempt the resource from putting pressures on the environment.

With ecological sustainability in mind, researchers Sangwon Suh, Dimitra Ioannidou and Guido Sonnemann — with the Bren School of Environmental Science & Management of UC Santa Barbara and L’Institut des Sciences Moléculaire of the University of Bordeaux — aimed to highlight the limitations of a future that implements a low-carbon transition in infrastructure when utilizing natural sand as “relief.” Their research is published in the Journal of Industrial Ecology.

While sand may seem abundant and readily available, the usability of certain sand reserves can be deceiving.

Suh, a UCSB professor who has a background in environmental engineering and specializes in industrial ecology, explained, “You see a great amount of sand on beaches. If you even take a look on campus, we definitely have what may seem to be a lot of it. Typically, people do not see it as a limiting resource and [think] that it is abundant as sea water, but in reality, there is not enough sand for construction purposes. This is not just any sand — it has to meet a certain quality to [be usable].”

Under experimentally projected Shared Socioeconomic Pathways (SSP) in different countries, the researchers estimated the future consumption of sand with the current consumption rates in order to give a value for the historic sand consumption per country. This measurement, along with the sand intensity of construction for buildings and infrastructure, was utilized to create a visual representing the global sand requirements for a 15-year period under the different SSPs, from 2015 to 2030. 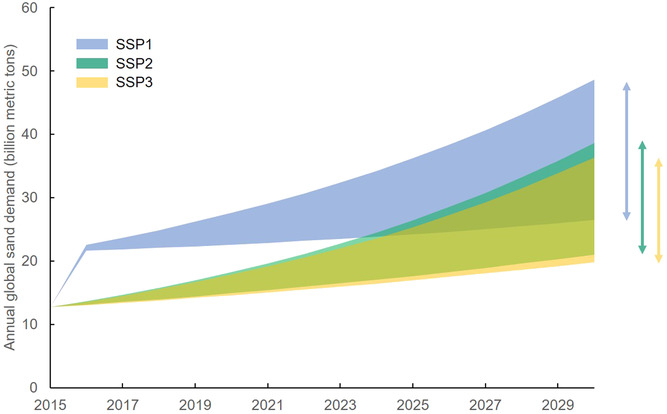 The graph shows the annual global sand demand projected for 2015–2030 under the three SSP scenarios. Courtesy of the Journal of Industrial Ecology

The different scenarios in chronological order from SSP1 to SSP3 scale from higher, more aggressive approaches to low-carbon transition to lower, more economically framed GDP estimates for developing countries in the SSP2 and SSP3 scenarios. As depicted by the graph, a highly focused global trend toward more renewable substitutes for bitumen and concrete shows a heavy demand in natural sand that only increases.

The research revealed that in comparison to the last 40 years of sand consumption, this projected period of natural sand demand from 2015-2030 requires 500 billion metric tons of sand, which is greater than a twofold increase.

A low-carbon transition within infrastructure would incentivize the minimization of energy expenditures and therefore, carbon dioxide and greenhouse gas emission. However, Ioannidou, whose postdoctoral research involves the analysis of resources for natural construction, pointed out, “The trade-off could mean the depletion of sand in certain regions.”

This demonstrates that while it is desirable in an ecological sense to utilize sand as a sustainable alternative, the infrastructure demand cannot be properly met by local resources in some regions.

Ioannidou explained, “Implementation in different world regions should be taken on a case-by-case basis, and we should try to see in every region what resources should [be used] from the economy and environment’s point of view.”

The researchers broke down the sand demand in current extractions compared to the projections for each SSP. These projections may allow industrial ecologists to prevent the overconsumption of a region’s natural sand deposits and come to a better understanding of what is needed.

As this research is more visible to the public, Ioannidou emphasizes that the public as well as people in construction must note, “Planetary boundaries [exist]. We should not go beyond the planetary boundaries in both carbon emissions and the Earth’s materials. This awareness is growing within people … and through this, I believe we can change a lot of things.”

This research calls attention to the need to develop technologies for sand conservation in the future. The further exploration of such advancements could mean a promising future within low-carbon transition.

As Suh put it, “Low-carbon transmissions and greenhouse transmissions are — as soon as this [COVID-19] crisis is over — an unmistakable reality that we must face. If we are to cope with climate change, the type of change we need to introduce and the impact of climate change response should be even much more fundamental and should last in the economic structure in the long run.”

As the world moves forth past temporary issues, climate change remains a paramount concern for the human race.

Suh continued, “[In our responses to climate change], we need to understand what the implications of such changes [in the world] are, and we should think about the other environmental facts and limiting factors. Low-carbon transition cannot come for free, and it is naive to think this.”

The Signs as Things You Can Do Once You're Vaccinated

Make out with strangers

Actually meet up with your Tinder matches

Scream (open-mouthed) into the void