In the time of the coronavirus pandemic, I have never been more aware of the fact that I am an Asian American. Without a doubt, this is an unprecedented period of great uncertainty, fear and tension within our country — and the rest of the world for the matter. Whether or not you have contracted the virus yourself, your life has most likely been upended and your lifestyle changed. COVID-19 does not discriminate and everyone is feeling the impact of the pandemic.

The current political and social climate, the rhetoric of a president who brands the coronavirus as the “Chinese virus” and a long history of marginalizing minorities has produced a hostile and dangerous environment for Asian Americans. Neither the pandemic nor fear itself are excuses for racism, xenophobia and ignorance. Yet, with the arrival and spread of COVID-19 has come a surge in racist slurs and hate crimes against Asian Americans. 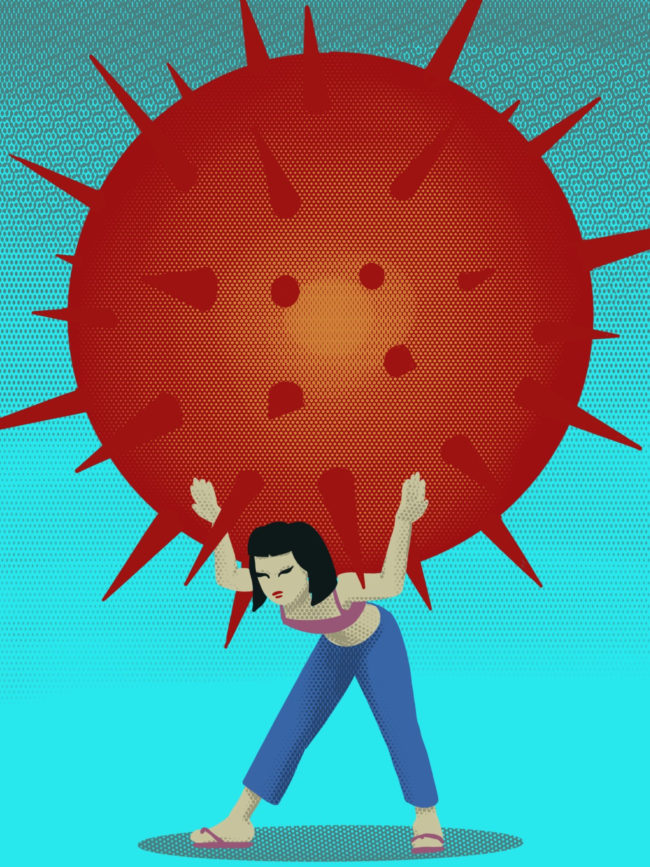 I am half-Chinese. I am half-Vietnamese. I am an American-born citizen. First and foremost, I recognize the degree of privilege I have been given in my life. I have two supportive parents. I have always had a roof over my head and food on the table. I had the opportunity to attain an excellent education from UCSB. I am grateful for all of it. I also want to acknowledge that my upbringing and experiences do not reflect those of all Asian Americans and other people of color. Racism affects different marginalized groups in different ways, and I can only speak from my own experiences.

In the past weeks, the nature of the pandemic and escalation of racism against Asian Americans has made me reflect on my own identity. The degree in which I have personally felt racism from others has been, thankfully, small. I can attribute this to the facts that I was born in California, speak English and grew up in a predominantly white community. I learned at a young age the right way to fit in among my peers and how to properly be the “token” Asian friend.

“You’re so white for an Asian, like a Twinkie!” (You know, white on the inside, yellow on the outside.)

“You’re the whitest Asian I know.”

Such seemingly “harmless,” if not incredibly ignorant, comments extended beyond friends and peers describing my “whiteness.”

“Your dad speaks English really well! He sounds so American.” That would be because he was born in Minnesota and grew up in California, speaking English as his first — and only — language. Did I mention he’s also American?

“I never realized your mom has such a heavy Asian accent,” the grown man said. He then proceeded to provide his best imitation of a stereotypical Asian accent.

As an immigrant who moved to America when she was 12 years old, my mother was experiencing the cultural shock of being in a new country and learning English as a second language. At this point in her life, her father had already passed away and her mother would pass away months after they moved to the United States. I was — and still am — incredibly proud of my mother for the trials she has overcome, a language barrier being one of them. Even before I fully understood what racism meant, I was still astonished, and inwardly cringing, that someone would make such an ignorant joke at the expense of my mom’s “heavy accent.”

Many Asian Americans are experiencing another threat on top of the fear of contracting the coronavirus — the fear of verbal and physical assault.

Only after recently listening to Jiayang Fan, a staff writer at The New Yorker, speak about her own story in an episode of “The Daily” podcast, did I recognize the “probational” nature of being Asian American. Would my experience be different if I was an immigrant? If my first language was Chinese or Vietnamese? If I didn’t have an American accent? If I didn’t understand English grammar and slang? Oh, absolutely. Even having a name like Calista, which originates from Greek, rather than a traditional Chinese or Vietnamese name, has factored into my experience as an Asian American.

We live in such uncertain times. The anxiety, loneliness and fear many Americans are feeling is completely valid. Like many others, I fear contracting the virus and the ramifications this would have for the family members I am sheltered with right now. And yet, many Asian Americans are experiencing another threat on top of the fear of contracting the coronavirus — the fear of verbal and physical assault. Although I have not been a target of racial slurs or hate crimes during the pandemic, I know the same cannot be said for others who look like me.

Words have power. Whether it’s a racial slur yelled by a bigot or an ignorant joke made at the expense of a minority group, these words leave a lasting impression. The language President Donald Trump uses in regard to COVID-19 disregards the World Health Organization’s practices of refraining from using geographic locations to name new infectious diseases in order “to minimize unnecessary negative effects on nations, economies and people.” Such language, spoken by the president no less, allows for the continuation of racism and xenophobia in our country. The virus is not an excuse for racism. Fear itself is not an excuse. Ignorance is not an excuse.

There is no excuse.

Although racism is a deep-rooted problem that the U.S. has carried throughout its history, there are still ways we can mitigate the pain and suffering it inflicts in our daily lives. Being conscious of the language we use and holding others accountable to do the same is a start. If you are in a position of privilege, then use that power to defend someone who is being targeted and be an advocate for the disenfranchised. At the very least, how about, just don’t be a racist?

I am grateful for the opportunities I have had growing up as an American. I am proud to be half-Chinese and half-Vietnamese. I hope to one day be proud of my country too.

Calista Liu would like people to just stop being racist.

It’s sad that people are venting their frustration on persons based on race. It is important to criticize bad ideas so thank you for writing the article and we’re sorry for your pain. Now, regarding the comment thread… Eating bats and poorly regulated wet markets are a bad idea and should be criticized. People who support this industry need to know it puts the world at risk and they need to be pressured to stop. Our fellow mammalian bats are particularly susceptible to harboring human transmissible viruses because they (like us) have long lifespans (30 years) and live in close… Read more »

I can only play the smallest of violins for this article and the author. They clearly does not have a clear conception of what “racism” is. Racism is an institutional framework that categorizes people based on “white” or “not white”, and provides access and material benefits accordingly. Yet this author wants us to feel bad because she is white passing? There are black people dying in droves in hospitals during this epidemic (Not to mention he rampant anti-blackness that exists in East Asian countries and societies), yet they makes a minute reference in passing about this in the third paragraph.… Read more »

I agree that what this author has said about her personal experience of racism doesn’t even qualify threshold of many people’s bad experience but the point she is making is valid about having to experience racism due to someone’s Asian look. I also think that racism is not just institutional framework between white and not white, it’s experienced by every person living away from there native region. For example few days ago in India a Manipuri girl( north eastern state and people look some what like typical Chinese) living in delhi(central India, people fit more typical Indian look) was abused… Read more »

As a fellow POC, I’m incredibly saddened to read this comment. This mentality that someone’s complaints/struggles aren’t valid enough because they’re not as bad as other people’s does no one any good. Yes, I understand your point that East Asians tend to receive preferential treatment because of their proximity to whiteness. Yes, I understand your point that looking at issues through an intersectional lens is always a good practice. But that doesn’t mean people shouldn’t express their personal experiences and perspective unless their topic centers on these specific issues. “Not to mention he rampant anti-blackness that exists in East Asian… Read more »

Umm…. Now that I think about it , I agree with you, it’s just that so many incidents much worse had happened to people I know that initially I thought that’s not harsh enough to take to heart and feel hurt. But now I guess no incident is small and one can’t judge others feelings and pain from there mentality I guess
Thanks though

This is why I support open carry and stand your ground laws. If I were an Asian-American being threatened, harassed, assaulted, or battered, I should have the right to protect myself and my peers.