The Daily Nexus
Science & Tech
UCSB Researchers Investigate the Impact of Nitrogen Pollution on Coral Bleaching in Moorea, French Polynesia
April 14, 2020 at 9:00 am by Sean Crommelin

Researchers with UC Santa Barbara’s Marine Science Institute have discovered an important relationship between the extent of coral bleaching experienced by a reef and the level of nutrient pollution present in the water the reef is in, with significant implications for ways to ensure the proper stewardship of reefs for the future.

The Nexus spoke with Mary Donovan, a postdoctoral researcher at UCSB currently working with Deron Burkepile in the ecology, evolution and marine biology department.

Coral bleaching is a process in which corals will, under extreme stress, expel their endosymbionts: algae that ordinarily live inside of the coral structure, the tissue of coral themselves.

“When the corals get really stressed, they expel those symbionts, because that relationship becomes toxic, and the symbionts are taking more from the coral than the coral is getting back in that normally symbiotic relationship. And how that manifests is that the coral turns white, because the algae is what gives the coral its color,” Donovan said.

“The coral themselves are not dead yet — they’re still eating and breathing — but they’re in jeopardy; they don’t have that beneficial relationship that helps them survive.”

Donovan, the lead author of the paper published in the Proceedings of the National Academy of Sciences, first came on board the project in 2018, working with and making models using data collected in 2016 in Moorea, a mountainous island located in French Polynesia just 11 miles northwest of Tahiti.

“You could refer to it as a ‘High Island;’ it has quite tall mountains, and then the island is surrounded by a lagoon. The lagoon is made up of these shallow habitats that are a place where corals live, and then there’s also a reef outside of the lagoon as well,” Donovan said.

“The human population lives right by the coast, because otherwise, the rest of the landscape is dominated by these steep mountains,” and because of their proximity to the coast, these settlements lie on the urban-coastal interface, and waste has a more direct pathway to the ocean and marine habitats than other locations. 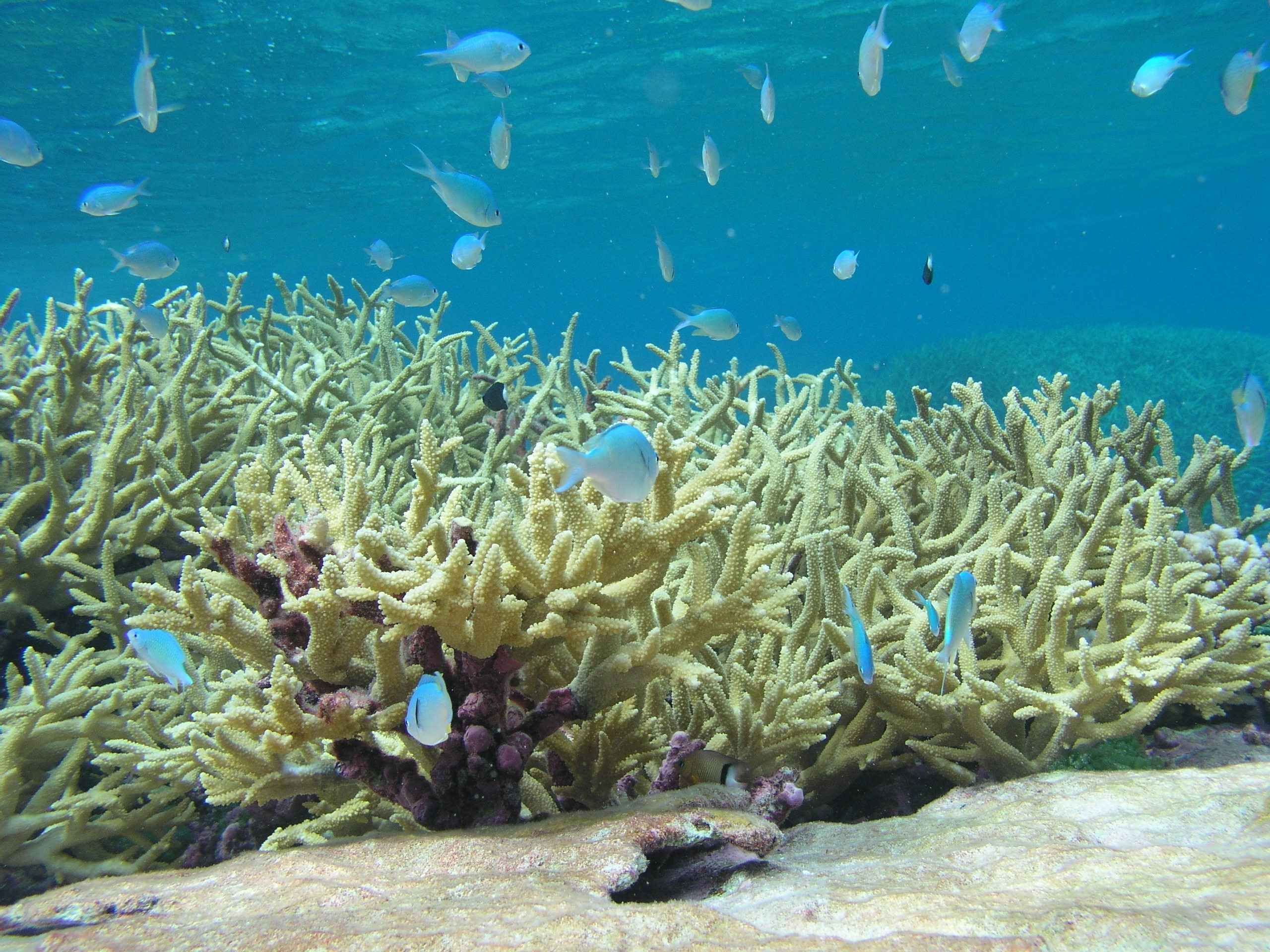 Chromis reef fish swim by staghorn coral, one type of coral the researchers studied in Moorea. Courtesy of Wikimedia Commons

The year 2016 was characterized by anomalously warm conditions all across the world. In Moorea, this manifested as a marine heat wave, resulting in coral bleaching of varying intensity across the seascape. In response to this, researchers involved in long-term monitoring on the island went out into the field to collect data regarding the condition of the habitats surrounding it.

“They anticipated this happening, and so they went down to do field work and collected this data during the heat wave, with the broader goal of understanding the temperature and the heat and how that affected the coral, as well as how that heat wave interacted with the pollution from that tropical island itself,” Donovan stated.

Researchers gathered information from broad swathes of Moorea, surveying much of the waters surrounding the ocean. Data was gathered regarding the condition of the coral themselves, with researchers traveling by boat to about 80 different sites across the seascape.

“[They’d] disembark from a boat and investigate features in the water, investigating the corals themselves. At the same time, we also collected little samples from algae. The algae was how we were able to measure nutrients. So the algae takes in nutrients from the environments and stores it in tissues, and that’s how we are able to measure nutrients in the environment,” Donovan explained.

“We observed corals around the entire island. Altogether, that represented quite a large area, about 50 square kilometers.”

Being able to pin down nutrients through algae allowed the researchers to discern the levels of nitrogenous pollution entering the water.

“The third factor was the data on the temperature, and so that came from instruments that we place in the water, that we deploy out into the water that’s recording things like temperature continuously over time,” Donovan said.

The results were illuminating. Nutrient pollution intensified the bleaching exhibited by coral, remarkably so during times of moderately warmer-than-average conditions.

“What was more interesting was when there were some situations on the spectrum where the conditions were hot, but not as hot as some other more extreme events. On the end of the scale, the corals that were exposed to nutrients were more likely to be severely bleached, meaning it was much worse for them if they were in the presence of the nutrients than if they weren’t,” Donovan said. The introduction of pollutants to water significantly lowered the threshold at which corals would begin to bleach.

“What was really interesting about this finding was that not only did we observe it over the entire island at quite a large spatial scale, but we also observed it in two different types of corals: Acropora corals and Pocillopora corals. In both of those corals we found the same pattern.”

Now, the researchers plan to continue studying the corals around Moorea, hoping to unearth more information disentangling the effects of the many variables all playing into the decline of coral reefs globally. A marine heat wave that occurred in Moorea in 2019 — one even more severe than the event in 2016 — is provoking further research in the area, with field work continuing.

“Not only are we going to be studying the bleaching of the corals, but we’re also going to look at what happened to those corals afterwards. Did they die? Did they survive? What implications does that have for the ecosystem?” Donovan said.

“One of the things that happens in coral reefs, and there’s been quite a bit of research in Moorea about, is that algae can take over, and the balance between algae and coral is undermined when these things happen, especially in the presence of human impacts. We’re studying how that might be related to the outcome for the reef and also what that means for people.”