The Daily Nexus
Opinion
A Love Story Cut Short By Coronavirus
March 22, 2020 at 8:00 am by Joshen Mantai

Amidst the chaos of the coronavirus pandemic, UC Santa Barbara students have been stressed, worried and freaking out — especially at the prospect of having no Deltopia. Blow after blow, we have been faced with the potentially destructive effects of a virtual spring quarter. Perhaps the most unnoticed consequence of our social distancing and impending cabin fever is the prospect of lost love and missed connections. Below is the story of a blooming romantic relationship cut short — a story a close friend of mine has graciously allowed me to share. Names and small details have been changed for the protection of their identities, but the story largely remains a piece of heartbreaking truth. 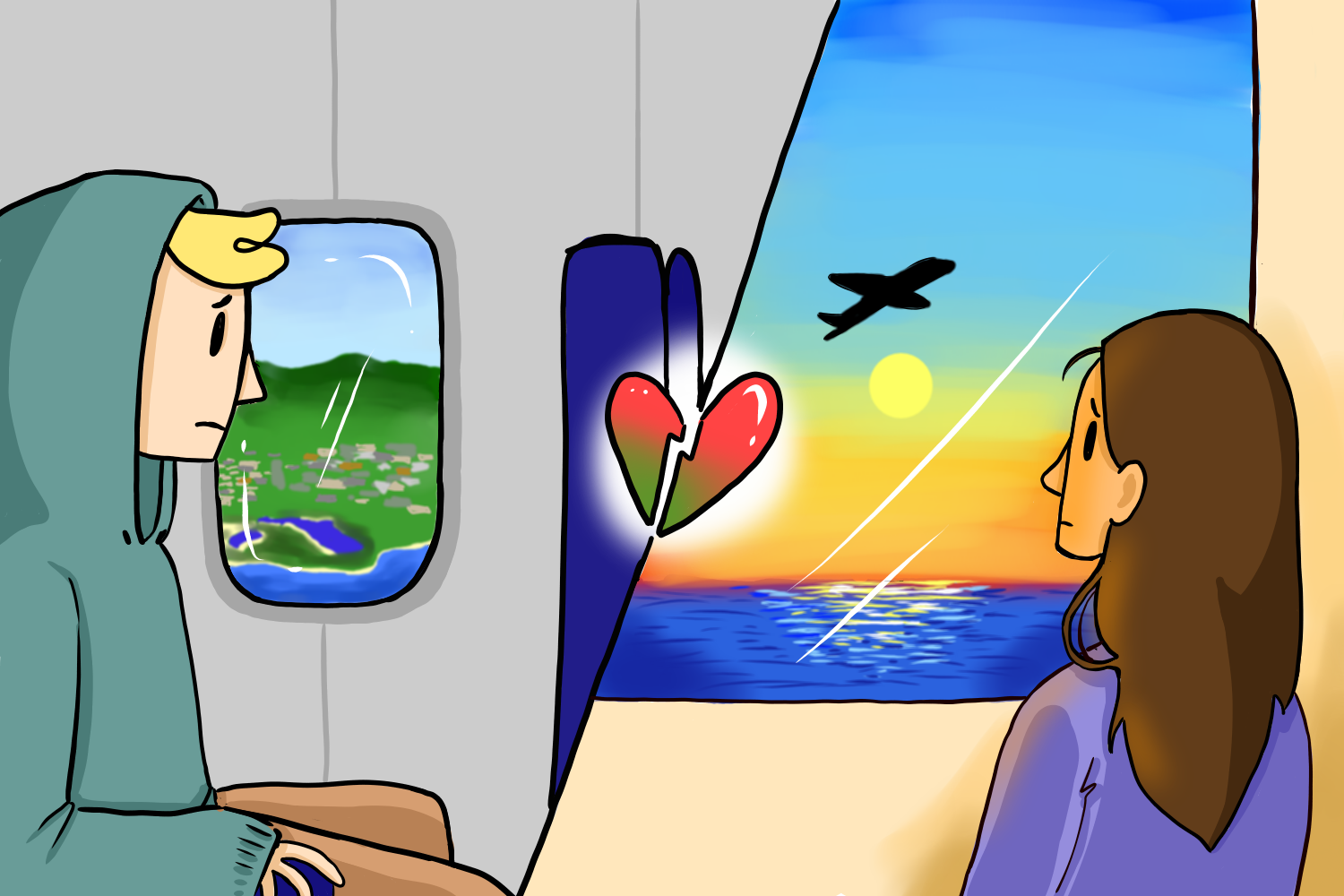 I — along with my friend Kallie and her love interest, Nathaniel, are all members of club lacrosse, which is where this story begins. Nathaniel is a timid and very hot (as you can imagine) German foreign exchange student who was studying at UCSB for the year, and who happened to be on our recreational club team. You might ask, how exactly did this crush ignite? Well, the answer is not simple. Kallie didn’t just see Nathaniel one day and profess her love for him on account of his dimples and dashing good looks.

This love story actually started with Nathaniel making the first move. He asked Kallie for a ride to one of our first club socials: bowling night. After zooming in on his Facebook profile pic, Kallie knew she was in deep trouble. When she took too long to reply and Nathaniel found a ride with someone else, she began to develop a small crush for this man and the potential of them being together. Because I did not go to bowling night, I initially thought her developing crush was a joke. Only after I met him in person did I realize how serious it was. At first, Kallie couldn’t figure out exactly which guy Nathaniel was (there were quite a few foreign boys on our team), but she soon discovered he was the best all-around guy amongst them all. Although he was only going to be at UCSB for a meager year, she was determined to swoop in and cuff this man.

After their first encounter, Nathaniel and Kallie began to engage in small talk at lacrosse practice, slowly getting to know each other, but nothing romantic ever quite came to fruition. To escalate matters, Kallie stumbled upon his “spot” on the third floor of the library, where he could be seen chatting with his hot foreign friends almost every day. You might be wondering … how does this relate to the story? Well, our group of friends soon made that section of the library our spot as well, running into him almost every time we were there. These encounters were short and sweet, enough for his pervading charm to continue to impress her (even when he showed up to the library with his hair parted IN THE MIDDLE one time).

Kallie and Nathaniel gradually became friends. Kallie messaged Nathaniel about the best spots to visit in Germany. They attended several more club parties together, flirting at times and sweetly embracing at a lacrosse party after Nathaniel protected Kallie from an annoying drunk guy.

Perhaps the biggest buildup to their potential romance took place at the last club lacrosse party. Nathaniel unexpectedly messaged Kallie that night, asking her if she was going to pregame before the party and if he could tag along. Well, little did Nathaniel know that we were hosting a pregame that night at our friend Peach’s house. We had little time to prepare for his arrival, as he showed up a few minutes later in an impressively appealing all-beige outfit (maybe emulating Kanye West? Not sure). He pregamed and walked with us all the way to the 68 block of Sueno, a walk that included several cute, witty exchanges with Kallie. He also spent a long time with us at the party, in imminent anticipation of hooking up with Kallie.

All of a sudden, it happened: Our friend group collectively turned around and Nathaniel was gone, having vanished from the party like a ghost in the night. It turned out that the only thing Nathaniel contributed to that night was some terrible tasting beer, leaving without even a goodbye kiss to our beloved Kallie.

This was perhaps the climax of their romance, but Kallie was determined not to give up. She still had a quarter left to make something happen between the two of them.

And this, my friends, is where the story takes a turn for the worse. The destruction began to unfold when Kallie and I were texting and discussing the impending doom of our yet to be canceled finals due to the coronavirus apocalypse. PING! A Facebook notification popped up on my phone, and the shocked expression on my face said it all. There it was: a post on Free & For Sale by Nathaniel, who was trying to sell his (very dirty) bike for $200. My shocked reaction was actually caused by the high price tag, but I quickly realized the more important matter at hand: He must have been selling his bike due to his foreseeable departure from UCSB. I hesitated to break this news to Kallie but texted her my inferences about the whole scenario. At first, she refused to believe it before realizing I could be right. I decided to reach out to Nathaniel myself so Kallie wouldn’t have to. Unfortunately, he told me that he had already booked a flight back to Germany. He expressed his sadness at being unable to say goodbye to all of his fellow club lacrosse players, as he most likely would not be able to return to America, thanks to Trump’s European travel ban.

Heartbroken, Kallie texted Nathaniel goodbye, calling him her “favorite German boy.” Nathaniel thanked Kallie for their memories, even offering Kallie future recommendations for other spots to visit in Europe.

After this abrupt goodbye, one of Kallie’s and my friends, Taylor, saw Nathaniel running down Pardall Road the day after. What exactly was he running toward? Was he running to finally profess his love for Kallie? Or was he running to get a cheeseburger from the Habit Grill? The world may never know. To this day, I still wonder.

I’m sure you’re wondering: Is this the end of the story? This can’t be it. Well, Kallie is studying in Denmark in the fall, a short flight away from Nathaniel’s home. While the reconnection of these two lovebirds is somewhat unlikely, we can only hope that fate may play a hand in their paths crossing again.

You also might be wondering how I am managing to recount this whole story right now, but I’ll have you know that writing it has, in fact, kept me sane during this crisis. This story is meant to be a lighthearted distraction from all the stress we may currently be facing, but on a more serious note, points toward how quickly life can change and shows the importance of living life to the fullest, as we never know how long it will be until we see our loved ones again.

In an unfortunate coincidence, Joshen just found out her potential future boo is leaving from a Free And For Sale post.

Joshen Mantai
Joshen Mantai serves as the 2021-2022 Director of Social Media Strategy. She enjoys shamelessly listening to Taylor Swift/Ariana Grande, fantasizing about having a cat and roasting others when they least expect it.
3 Comments
Inline Feedbacks
View all comments

This has to be the most melodramatic yet pathetic love story I’ve ever read. OH NO, SOME GERMAN HUNK WHO SHOT FORLORN GLANCES AT YOUR FRIEND WENT HOME?! IT’S JUST LIKE TITANIC!

Seriously! This type of story honestly feels insensitive right now. Get your priorities in check.