As the effects of climate change continue to intensify, species are shifting their normal habitat ranges.

Researchers seek to predict where and how species will move, which can inform the maintenance of food security and preservation of biodiversity and ecosystem function, among other factors. But because numerous aspects come into play, how individual species respond to climate change can be difficult to forecast.

To shed light on the subject, UC Santa Barbara researchers studied the dynamics of cold and warm range edges of marine fishes at the individual species and warm- and cold-edge assemblage levels. Cooler climates occur toward the poles in most parts of the world, making a cold range edge poleward and a warm range edge equatorward.

“This work was trying to get a better handle on what really makes species shift their ranges and how correlated they are with temperature, which is crucial for eventually being able to predict species on the move,” said Alexa Fredston-Hermann, a former doctoral candidate in UCSB’s Bren School of Environmental Science & Management and an incoming postdoctoral fellow at Rutgers University.

The scientists examined whether cold or warm range edges of fishes could better track climate change on the Northeast U.S. Continental Shelf, which extends from Cape Hatteras to the Gulf of Maine. Supporting numerous fisheries, it is a “global warming hotspot” with a 1 degree Celsius temperature rise in the last century, according to the study published in Global Change Biology.

Using annual survey data from 1968 to 2017, the investigators looked at temperature, the ocean’s most prominent climate variable, at the sea surface and sea bottom. They analyzed two groups of species: one with a cold range edge in the Northeast U.S. Shelf and the other with a warm range edge in that area.

The group tested several hypotheses that may explain the shift in a species’ distribution. One, called the biogeography hypothesis, was developed using mostly terrestrial systems. It states that the cold edge is temperature-mediated and the warm edge is not because the latter experiences less climate variability.

“Instead, its position is probably mediated by interactions with other species or other biological processes, not the environment,” Fredston-Hermann said.

Another hypothesis is the extinction debt hypothesis, which is also largely founded on terrestrial systems. It asserts that the cold-edge range may respond faster to climate changes than warm edges due to “lag.”

“That’s partly because, for many species, colonizing a new area is a faster process than going extinct. If you go extinct, which is what might happen at the warm range edge as it becomes too warm, every single individual has to die. And if it’s a tree species, for example, that could take centuries,” Fredston-Hermann stated.

Yet, a competing ocean-specific hypothesis, the ecophysiology hypothesis, suggests that the cold and warm range edges should track climate equally well. With marine species being extremely sensitive to temperature, their distribution correlates strongly with their temperature tolerance. Climate-related local extinction is much more common in the ocean, signifying that both the warm and the cold edge are temperature-mediated, according to Fredston-Hermann.

The study is among the first of its kind to use annual dynamics of cold- and warm-edge ranges rather than space or time to study widespread change. The collaborators developed customized isotherms, or map lines, to plot where specific temperatures are located in space instead of using regional temperatures in their study.

“Matching a species range edge position with the position of the temperature that we established it should track was a novel way to downscale global climate change to something you can map onto the frontier of a species distribution,” Fredston-Hermann described. “I think that was the most innovative part of this analysis.”

Both the warm and cold range edges of marine species tracked temperature and shifted north to move away from warming ocean temperatures. However, the researchers found that cold edges shifted further north with warming and tracked both the sea surface and sea bottom temperature more closely than warm edges.

“We took that as evidence that the ecophysiology hypothesis must not be true for these species because the warm edges were consistently tracking temperature to a lesser degree and shifting less,” Fredston-Hermann said. This information also revealed that much of the effect varies by species.

Fredston-Hermann emphasized the biggest takeaway from the project was that species generally cannot be assumed to track temperature perfectly. While this may be more clearly observed with terrestrial species, many models of ocean species predict that fish will start to move “in lockstep” with warming as soon as temperatures change, according to her.

“Our results suggest that even among highly mobile, cold-blooded species in a global warming hotspot, they are not doing exactly what you predict based on temperature alone. And we need to get a better understanding of what [non-climate] processes are really driving these range edge dynamics before we can forecast where species will be found in the future.” 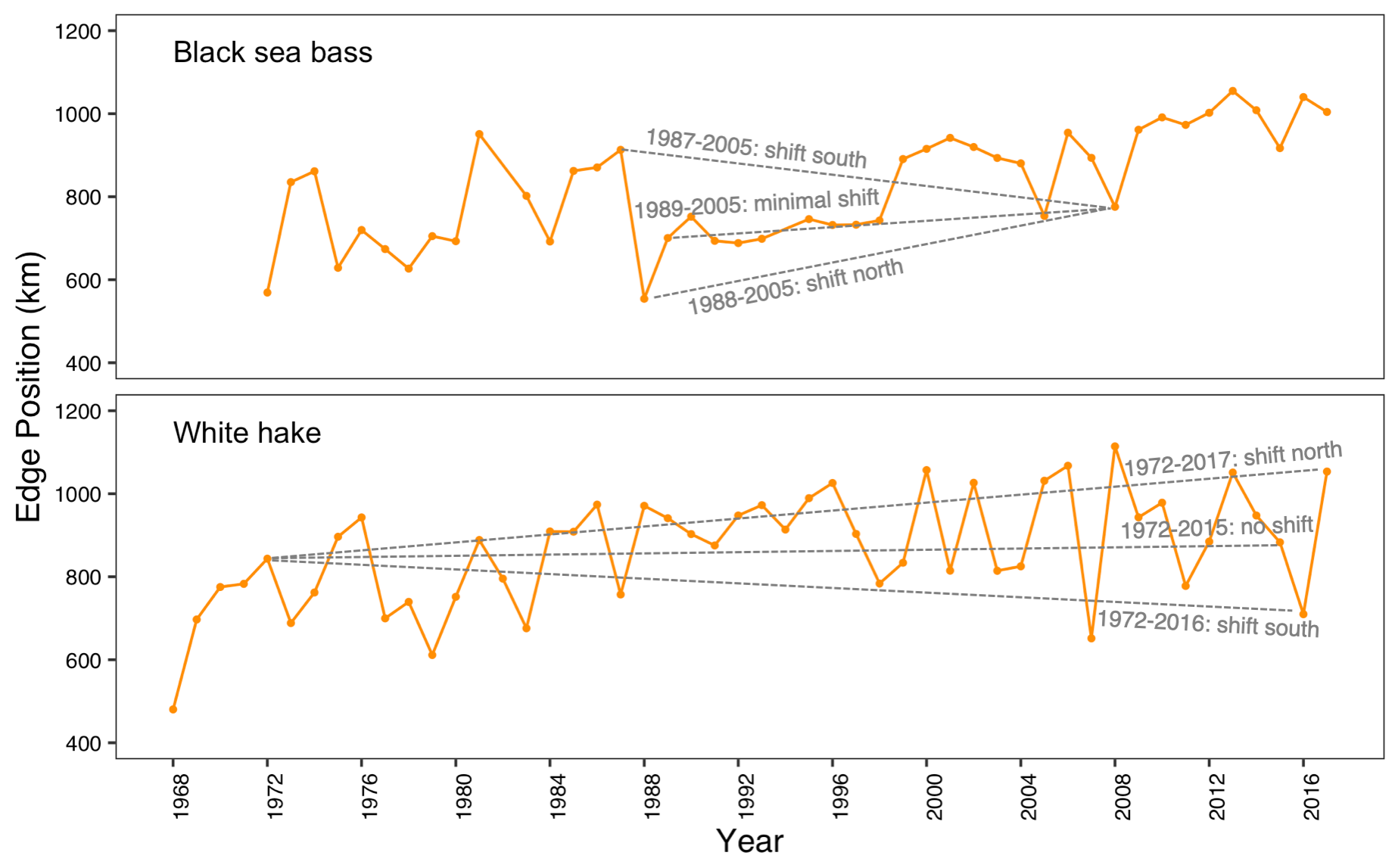 Fredston-Hermann stresses the importance of continuing long-term surveys to have long-time data available for studies. The figure shows that if there were just two years of data and one was a year earlier or later, a potentially different conclusion might be drawn for whether the species even moved north or south. Courtesy of Alexa Fredston-Hermann

Another point Fredston-Hermann highlighted was the necessity of having long-term data available for studies such as this one.

“Many of the studies looking at range edges like colonization and extinction only have a few years of data in them … Our results suggest that those kinds of studies can be very misleading, not just in the degree of change, but actually in the direction.”

She continued, “We think that this study really underscores how important it is to continue these long-term surveys and to extract from them as much as we can about these long-term dynamics, because we really needed 50 years of data to separate the signal from the noise.”

Fredston-Hermann and her colleagues have conducted a follow-up study in which they extended the use of their methods from this project to determine which species are tracking temperature in other regions, including the West Coast and the eastern Bering Sea. They have also since established an objective metric for classifying species as temperature trackers, partial trackers or non-trackers.

“We’re continuing to chip away at understanding the role of temperature in driving range shifts in the oceans and where we can use it to predict the future and where we shouldn’t,” she said.

Web design isn’t taught at UC santa Cruz, at porterville college it is. Will statistics be used in skateboarding Olympics like mode median mean, or will guy go for let me hang out with pro skater performance.